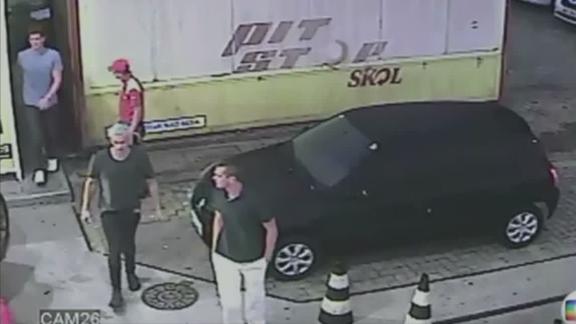 A day after United States swimmer Gunnar Bentz released a statementapologizing and providing his account of a late-night incident at a Brazilian gas station, teammateJack Conger released his own statement.

"First and foremost, I deeply regret the trouble and embarrassment this event has brought to the people of Brazil and Rio de Janeiro, and the distraction it has caused from the achievements of my fellow Olympians," Conger said.

Conger clarified that he was not considered a suspect by Brazilian police, only a witness, and said he was "completely truthful" in all of his statements.

Conger went on to provide a brief summary of the events last Sunday, which echoed many of the same details provided by Bentz in his statement.

Conger said the four Olympians pulled into a gas station to use the restroom but ended up relieving themselves outside. He said Ryan Lochte removed a poster from a nearby wall, which resulted in the swimmers being confronted by two armed security officers. Conger said he cooperated, while "there was a heated exchange among others" and "at one point a weapon was pointed at me." Conger said they received the help of a man who was able to translate for them, and the swimmers paid some money as compensation for the torn poster and went back to the Olympic village in another taxi.

"This has been an unsettling, humbling and frightening experience," Conger said. "It's a reminder that all of us, when we travel and especially when we represent the US in the Olympics, are ambassadors for our country and should be on our best behavior."