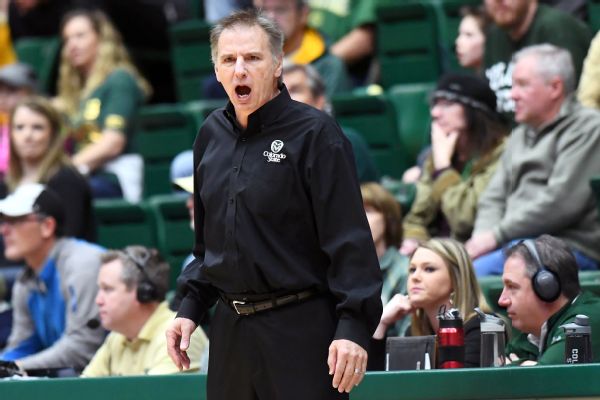 Records from a 2013-2014 Colorado State investigation reveal men's basketball coach Larry Eustachy created a culture of fear and intimidation and emotionally abused his players, the Coloradoan is reporting.

FormerColorado Stateathletic directorJack Graham, who hired Eustachy in 2012 and led the school's investigation, told the newspaper a recommendation was made to fire the coach.

According to documents obtained by the Coloradoan,Eustachy acknowledged he has told his assistant coaches to "shut the f--- up" and called players "f---ing c--ts." He also said he "crossed the line" and later said he went "way over the line" when questioned about whether the atmosphere in his program was one of fear and intimidation.

The school required Eustachy to attend anger management sessions and apologize to his team. He also was given a zero-tolerance policy in regard to his behavior toward players, and a violation would result in his termination for cause.

Eustachy, in a statement released by the university, said, "I am deeply disappointed on a very personal level that someone chose to publicize confidential information from my personnel file. That said, I fully recognize that I'm not perfect. I have my faults and strive every day to be better than I was yesterday."

"Colorado State University is prohibited by law from disclosing personnel information and from commenting on confidential personnel matters, particularly where employees have a legal expectation of privacy," the university said in a statement. "... The university is committed to the highest standards of integrity, and when any issues have arisen, the university has taken appropriate action to maintain that integrity in our programs and ensure our standards are met.

"The program review at issue took place several years ago and we stand by the manner in which we dealt with the allegations -- then and now. We stand behind, and are proud of, the environment our athletic department and Coach Eustachy have since created for our student-athletes."

The Rams (18-9, 10-4 Mountain West) are atop the conference this season despite having only seven players after three others were ruled ineligible in early January.

Eustachy resigned as head coach at Iowa State in 2003 when photos of him partying with students surfaced. Soon after, Eustachy went into rehabilitation to treat alcoholism.

Following a year away from basketball, he was given another opportunity at Southern Mississippi before arriving in Fort Collins.