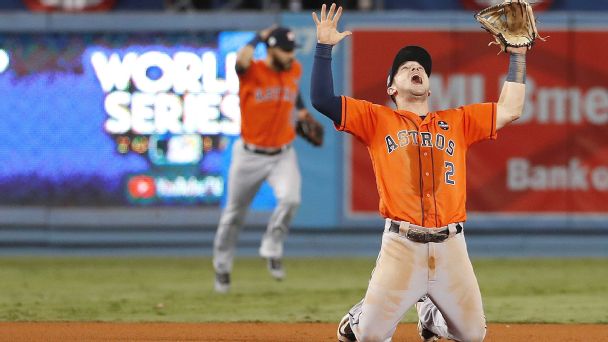 Baseball tells two big stories about itself. The first is a story about utter unpredictability. It's the part about Jose Altuve and Dallas Keuchel and Brad Peacock, and about Jon Singleton and J.D. Martinez and Mark Appel. It's broken-bat singles and the line-drive outs, it's "my s--- doesn't work in the playoffs," it's "Suzyn, you can't predict baseball." It's the 51 times the 2013 Astros somehow managed to beat a better team.

The other big story is about predictability, about how the brutal repetitions of a 162-game season eventually wear down the randomness and reveal true talent. It's "regression to the mean" and projection systems and Carlos Correa. This predictability is what grounds baseball and saves it from nihilism. It's why we're amused instead of spooked by that now-famous Sports Illustrated cover from June 2014, the one touting the last-place Astros as "Your 2017 World Series Champs." If baseball weren't predictable, that cover would look like witchcraft, and we'd be forming cults around it. But we know that, on a basic level, it was predictable, that in the big picture baseball often is.

That magazine cover captures an organization that explicitly bet on this second story baseball tells. In December 2011, when the Astros hired Jeff Luhnow and his 25-page plan for the organization, they -- and he -- were declaring that the world's most unpredictable sport, on a long-enough timeline, can be tamed. They must have believed that; no sane human being would embark on something as bleak and embarrassing as #theprocess if they weren't pretty darned sure it would work.

The Astros -- beginning even in the year before Luhnow was hired, but especially afterward -- made three assumptions about the predictability of baseball. It started with the very first move that Houston made after hiring Luhnow.

Assumption 1. The projections saying they were going nowhere were right. When Luhnow was hired, PECOTA, the projection system at Baseball Prospectus, foresaw the Astros winning just 59 games in 2012. Keith Law, ranking farm systems for ESPN, saw Houston's minor league system as just 27th best in baseball. The Astros had their own projection systems, and their own rankings of prospects, but their internal tea-readings almost certainly concurred on both counts.

Plenty of teams have refused to believe they were bad. Some held out hope they would be saved by baseball's unpredictability, and some were right. But the Astros, flailing, sinking, falling further and further behind the rest of the league, were told they were hopeless and they chose to believe it. They had new ownership and a new front office, and they were, in some sense, free to believe it.

That decision affected every move they would make (or not make) for years. Just hours after Luhnow was announced as the new GM, Houston traded for a 22-year-old shortstop who had just been chosen by Boston in the Rule 5 draft. The Astros considered him to be "a strong defensive shortstop," but he was nowhere near good enough to hit major-league pitching at that point. Rule 5 picks must stay in the majors all season (barring injuries) or be returned to their original club. "I don't see him sticking," beat reporter Brian McTaggart said at the time, but the Astros let him go out and get brutalized by big-league pitching for the whole season. He hit .234 with two homers. The Astros, and perhaps only the Astros, were able to give that roster spot and those 219 plate appearances to a young Marwin Gonzalez. They were on their way to 107 losses.

Gonzalez hit 23 homers this year. He's not a strong defensive shortstop anymore. He's a slugging left fielder who outhit Paul Goldschmidt, Anthony Rizzo and Nolan Arenado this year, and who doubled, singled and walked in Game 7.

Assumption 2. A team can win almost every move. In a league where all 30 teams have smart GMs -- the league Luhnow found himself in -- it's impossible to fleece everybody all the time. But there's one way to tilt the scales always in your favor: Time shift.

Almost every other GM in the league would like to add good players right now. They're human, for one reason, and even those of us who pass the marshmallow test might hesitate if the choice were one marshmallow now or two marshmallows in three years. We have proverbs about the prudence of now vs. the speculation of later -- don't count your chickens before they're hatched; a bird in the hand is worth two in the bush.

So you have, say, 25 GMs fighting for the player who is good right now, and willing to pay a premium from the "later" fund to get him. Meanwhile, the Astros were all but living in the future; their present was unprecedentedly bleak. They could pass over all these good players while collecting not-yet-good players -- Rule 5 picks, guys on the waiver wire, spare pieces thrown into trades for the Astros' veterans. After the 2012 season, they traded one of their only solid veterans -- Jed Lowrie -- to Oakland for Chris Carter and two other young players. Lowrie played well for the A's, for a couple years, and then he hit free agency. Carter did OK, then he was granted free agency. One of the young players, though, would grow up to become Brad Peacock, the first man A.J. Hinch called out of his bullpen in Game 7. They got Chris Devenski for the husk of Brett Myers. They got Gonzalez because the Red Sox, trying to win, couldn't waste a 40-man roster spot on him.

It's easy to overstate this; we all love the cute pickups, but the bulk of the 2017 Astros you'll remember in 30 years were either top draft picks, veterans signed or traded for after the Astros got good, or prospects whose development began under Ed Wade, the previous GM. Even for many of these latter players, the Astros' ability to shift all their attention to some point off in the future gave them a sort of superpower: They could be patient with Keuchel during his bad first two seasons, give Altuve tons and tons of playing time even when he was a below-average major leaguer, manipulate their top prospects' service time to keep them under club control longer.

When they finally got good, and wanted to get great, they had no burdensome long-term contracts left over from a previous push; they could sign Josh Reddick and Brian McCann, trade for Justin Verlander, and still have a league-average payroll. On top of this are players like Peacock, Gonzalez, and Devenski, like Joe Musgrove (acquired for Francisco Cordero and others), like Collin McHugh (a waiver claim) and Will Harris (ditto).

"It's not hard to take a fortress," an officer in Tolstoy's "War And Peace" says. "It's hard to win a campaign. And for that there's no need to storm and attack, there's need for patience and time." The Astros started their rebuild with almost nothing, but they had patience, and they had time.

Assumption 3. With this approach, success was almost guaranteed. Otherwise, there was just no way to justify tearing down an entire organization and subjecting its fans and players to a level of play that simply need not ever exist.

How could success be guaranteed? The whole reason GMs will pay more for "now" is because baseball hunts down "later" and snaps its UCL.

It's true that a lot went wrong for the Astros on the way here. Singleton, a top-50 prospect when the Astros signed him to a long-term extension in 2014, flopped. He's not on the 40-man roster anymore. Appel, the top pick in the 2013 draft, flopped. Three of their top pitching prospects in the early stages of the rebuild -- Mike Foltynewicz, Jarred Cosart and Jordan Lyles -- stagnated. All three were traded, but none would have made this World Series rotation.

The Astros knew that these things would happen. They also knew that, if they had enough young players, if they had enough payroll flexibility, if they let enough guys kick around in the majors until they started to figure things out, they'd end up with a lot of valuable baseball players. For every Singleton there's a Springer; for every Cosart there's a Keuchel; and for every terrible, horrible season there's a Correa or Alex Bregman (or Appel).

One of the nice things about planning for something far off in the future is that the benefits don't need to even be clear. They had some glimmer of hope that Gonzalez might turn into something. They didn't have to know exactly what it would be. If they did, they probably would have gotten it wrong.

"I learned a lot about how the gaming industry works, and about probabilities," Luhnow says in that 2014 magazine feature. "How if you have a large number of occurrences, even though luck is involved, you can still make things pretty predictable." That, as much as anything, is the philosophical premise behind The Process T-shirts. It got the Astros to the World Series.