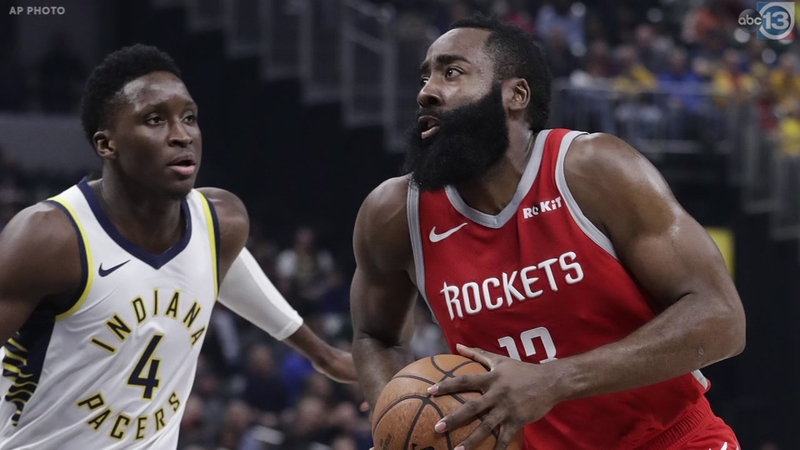 INDIANAPOLIS, Indiana -- James Harden made a tiebreaking 3-pointer with 34.8 seconds left and then closed out Houston's 98-94 victory at Indiana by making four straight free throws on Monday night.

The reigning MVP scored 28 points as the Rockets won their third straight since starting 1-5. And the victories have been coming in large part because of an improving defense. It's the fourth time in six games the usually high-scoring Rockets failed to hit the 100-point mark.

Victor Oladipo scored 28 points and made two 3s in the final minute to cut the deficit to 94-93 but it wasn't enough as Indiana's three-game winning streak ended.

Houston has won three straight in the series though this one took everything Harden and his teammates could muster.

Indiana charged out to a 65-57 midway through the third quarter but couldn't pull away.

When P.J. Tucker's 3-pointer rattled in with 7:28 left and Carmelo Anthony followed Tucker's basket with another 3, the Rockets tied it at 81. Chris Paul broke the tie with a layup and Harden made a free throw after Pacers coach Nate McMillan drew a technical foul.

Oladipo tied the score at 90 with his first 3 in the final minute.

But Harden broke the tie with his fifth 3 of the game and Paul made 1 of 2 free throws to give Houston a 94-90 lead.

Oladipo cut the deficit to one with his final 3 but the Pacers didn't score another basket.

Rockets: Chris Capella finished with 18 points and 10 rebounds for his sixth consecutive double-double, a career best. His streak of five consecutive games with at least 12 rebounds came to end. ... Paul took only three shots in a scoreless first half and wound up with nine points and 13 assists. ... James Ennis III had 13 points. ... The Rockets went 15 of 47 on 3s and improved to 4-0 this season when outrebounding opponents.