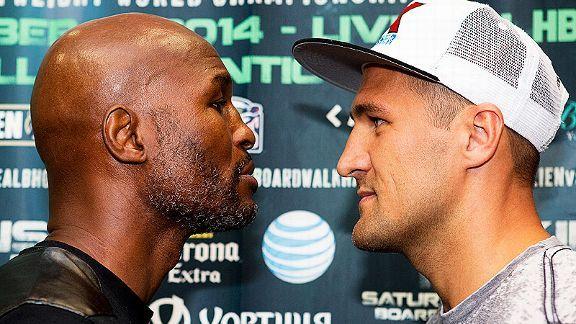 PHILADELPHIA -- Unified light heavyweight titlist Bernard Hopkins believes race is the reason his pursuit of history hasn't been a bigger story outside of boxing.

Hopkins, who set records as the oldest boxer to win and defend world titles, will be two months shy of 50 when he faces unbeaten Sergey Kovalev in Saturday's light heavyweight title unification bout at Boardwalk Hall in Atlantic City, New Jersey.

In an exclusive interview with ESPN.com, Hopkins was asked the reason his record-setting run in recent years hasn't transcended the sport.

"[It's] because I'm black," Hopkins said before the start of his media workout at the Joe Hand Boxing Gym. "What do you think if my name was Augustine, Herzenstein, Stern? Cappello? Marciano? Don't you understand the conflict of interest?

"If I was any of those names of any other background, I'd be on every billboard and every milk carton and every place to be. If we're talking 'American Dream,' here's a guy who almost threw his life away and he took this great country's great attributes and used it -- do for self, work hard and be a law-abiding citizen. I've done that for 26 years."

"If you really look at it, I have done the 'American Dream' that people have died on boats to come here to live," Hopkins said. "I have done all of that and then you look back and say, 'Wait a minute, what's wrong here?' A lot of people are not bold to say it, but I am."

Hopkins is no stranger to speaking out about race. In 2011, he made national headlines for comments about then-Washington Redskins quarterback Donovan McNabb not being "black enough."

On Saturday, Hopkins faces possibly his most dangerous challenge in more than a decade against Kovalev (25-0-1, 23 KOs), the feared Russian slugger whose 2011 opponent, Roman Simakov, died three days later from brain injuries suffered in the bout.

Hopkins claims a victory over the favored Kovalev wouldn't be enough to crack his top three of most significant in-ring performances. He reserves the top spot for his 2008 upset of unbeaten middleweight champion Kelly Pavlik in a 170-pound catchweight bout.

"That was the greatest moment of my life because it was undeniably white against black," Hopkins said. "The American story against the thug, even though he changed his life. The convicted felon. So it was me representing an entity that had changed in spite of what they say you should be able to do. But once you do it, they really don't want you to do it.

"And so I exposed it and I beat him easily after being a 6-to-1 underdog. And, matter of fact, it even went further. I ruined his life. I ruined his career."

Pavlik was never the same after losing to Hopkins. He surrendered his middleweight title two years later to Sergio Martinez amid troubles with alcohol and retired from the sport in January 2013 at the age of 30.