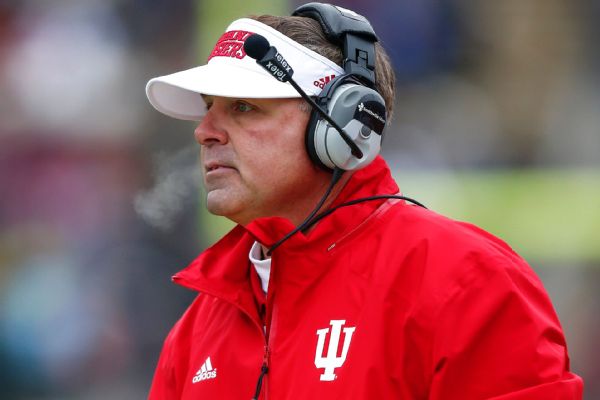 Indiana Universityofficials have accepted the resignation of football coach Kevin Wilson due to "philosophical differences," with defensive coordinator Tom Allen immediately given a six-year deal to take over the full-time job, the school announced Thursday.

"I appreciate Coach Wilson's many positive contributions to our football program," athletic director Fred Glass said in a statement. "This has nothing to do with the performance of the football team, which I view as quite positive and very much heading in the right direction."

Glass said in the statement that no NCAA compliance issues had led to Wilson's abrupt resignation. However, a former Hoosiers player told ESPN on Thursday that he and at least five current IU players were interviewed about Wilson's treatment of players in meetings with athletic department officials and university lawyers during the past two weeks.

"There was no smoking gun, no precipitating event," that led to Wilson's resignation, Glass said, and he was confident after an outside review from legal counsel that no players' medical issues were compromised under Wilson. Instead, he said the two "weren't on the same page" in terms of leadership style.

When Glass gave Wilson a contract extension in January, he thought those issues had been ironed out. In early November, though, Glass said, "it came to my attention that some things I thought we'd put behind us had bubbled up again."

Glass did not specify what those issues were about.

Earlier Thursday, a former Indiana player's father told ESPN that his son suffered a concussion in practice shortly before the 2015 season and was rushed back to workouts, causing his symptoms to intensify.

"He was out about a week and they started a normal concussion regimen, in which he was allowed to work out for about 20 minutes and gradually increase it," the former player's father said. "But after he worked out for 20 minutes, they had him run about 6 miles. After that, my son was feeling fine. But when he went home, he started throwing up and his symptoms went haywire."

"We don't have any outstanding claims of medical issues," Glass said Thursday.

Indiana junior quarterback Zander Diamont, who said earlier this week that he'll end his football career after this season in part due to concussions, told ESPN's Chantel Jennings on Thursday that he was not one of the players interviewed by athletic department officials and university lawyers.

"I have no knowledge of my announcement last week having anything to do with Coach Wilson [leaving Indiana]," Diamont told ESPN on Thursday. "I certainly hope that's not the case.

"I had a concussion in 2014 against Purdue and a separated shoulder/concussion in the 2015 season during the Penn State game. I kept any other dings to myself. Coach Wilson and IU football followed concussion protocol to the letter. Coach Wilson was completely supportive during my recovery and didn't want me on the field until I was cleared, and beyond that, felt that I was 150 percent. So this is all just as much of a surprise to me."

Former Hoosiers offensive lineman Bernard Taylor, who played under Wilson from 2011 to '14, told the "Right Time with Bomani Jones" on ESPN Radio that Wilson's treatment of players "was ridiculous," but he didn't offer specifics.

"Don't get me wrong he's a great coach and smart on the offensive side of things, but as far as the way he treated those cats, it was ridiculous," Taylor said. "If you really want to go on a whole list, a whole tangent, things beyond injuries, it's an entire list and I'll be talking to you all day, man."

Jacksonville Jaguars practice squad wide receiver Shane Wynn said Friday that he had "zero issues" with with Wilson during his time with the Hoosiers.

"The way he coaches is you're not going to be soft around him," Wynn said. "He was hard on us all the time, and I guess if a coach is hard on you, some people just can't take that."

Wilson had a 26-47 record in six seasons at Indiana, including a 6-6 mark this season as the Hoosiers wait to find out which bowl game they will play in.

In January, he was rewarded with a raise and a six-year contract extension -- at $2.55 million per season -- through 2021 after guiding the Hoosiers to their first bowl appearance since 2007.

Wilson will be paid $542,000 -- his base salary for one season. Wilson's agent, Neil Cornrich, didn't respond to a telephone call and email by ESPN requesting comment.

Allen joined Indiana as the associate head coach this season, and he was a nominee for the Frank Broyles Award after the Hoosiers' defense limited opponents to 136.9 fewer total yards and 10.3 fewer points per game than it gave up in 2015.

"My heart breaks for [Wilson]. I never expected this to happen," Allen said.

Glass described Allen's leadership style as "demanding but not demeaning," and praised the positivity he brought to his role as defensive coordinator this season.

"Once Coach Wilson and I concluded to part ways, I turned to determining who the best person in the country would be to keep up our momentum and take us to another level with our football team," Glass said. "I quickly concluded that person was in our midst in Tom Allen. He is a leader of men. He is demanding without being demeaning. He is a proven, successful coach on a national scale with deep Indiana ties. He cares about his players, and they care back."