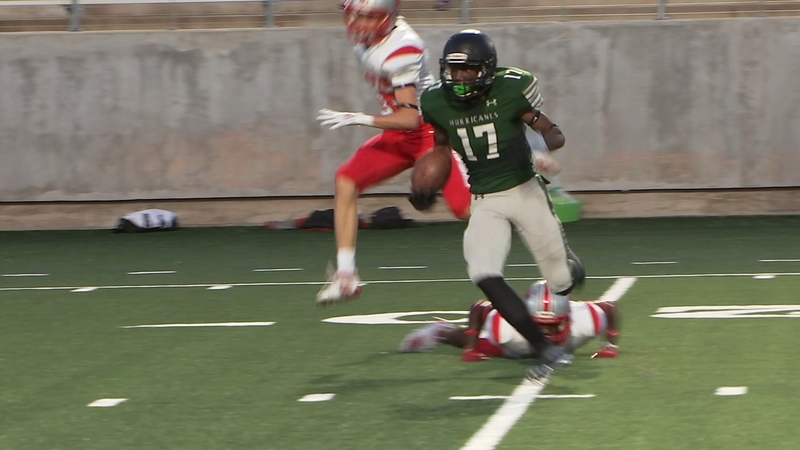 MISSOURI CITY, Texas (KTRK) -- A Hightower football and track standout who died over the summer is being remembered by his classmates and coaches in their first football game of the season.

Trey Thomas suffered an unknown medical emergency in June when he died unexpectedly.

The Hurricanes will wear a decal on their helmets when they play Westfield High School Friday night. They'll also warm up while wearing shirts with Trey's number. Once the team makes its first offensive snap, Hightower will line up with only 10 men on the field, recognizing that Trey would have been the eleventh man. It's a plan that's been in the works since his death, Hightower head coach Joseph Sam told ABC13 at the time.

WATCH: Hightower's football team gathered in a circle before their game against Westfield to honor Trey
EMBED More News Videos

Hightower High School coaches and athelets joined together to honor Trey Thomas who suffered an unknown medical emergency in June when he died unexpectedly.

In addition to playing football, Trey was also well known for his abilities in track & field.

He attended Sterling High School for two years before transferring to Hightower. Both communities mourned his loss over the summer.

Trey was remembered more for the person he was off the field than on, always flashing a smile that would light up any room he was in, according to coaches.

Trey's uncle, David Ray, told ABC13 in June that his family was doing better than you might expect, because "their faith is strong." He went on to say, "God took Trey to do something bigger - it hurts and we feel it, but we're also excited because now he is an angel."

Dexter Addison coached Thomas at Sterling and said Trey was an angel.

"Definitely a kid you hope your son would be just like," Addison said.