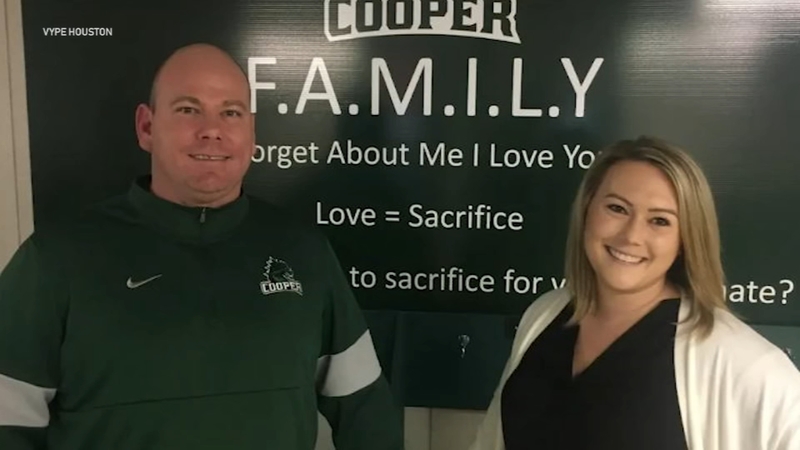 THE WOODLANDS, Texas -- It's a Thursday afternoon. School is long over, and a soccer match is underway on the field behind The John Cooper School.

On this night, I'm not here for the soccer match as I walk behind the stadium to Erik DeHaven's office.

From the outside I hear a noise followed by laughter. When the door opens, standing there with a big smile is Erik holding a whiffle ball bat and his wife, Alex, both laughing as they had been playing a little game inside to pass the time.

With smiles from ear to ear and the three of us still chuckling, we sat down.

Erik sits behind his desk and his wife Alex to my right. A photo of them from the day they got engaged a few years ago at a St. Pius X spring football game sits on the shelf to the left. We sat and talked.

We talked for nearly an hour.

The topics ranged from football, to the new Netflix show "Cheer", to offseason workouts, to the challenges of each of our jobs and plans at The John Cooper School with facilities.

But then we really talked. We talked about God, prayer and the biggest topic of the day - family.

The DeHavens, who have been married for two years, are looking to start their family as many married couples do at the right time of their life.

Erik, The John Cooper School head football coach, and Alex, who teaches at Brabham Middle School in Willis ISD and is currently working to become a principal one day, have always had a love for children. Now, they want their own.

"It's the greatest profession in the world because I get to be a part of that process with young men," Erik said. "I really enjoy it, but I also believe a child represents the love between a couple."

But starting a family for everyone doesn't take the same path.

Alex has a fertility issue called PCOS (Polycystic Ovarian Syndrome), which affects her ovaries, making them not function properly. It is a family trait and she has known she has had it since her teenage years.

"It's not like you can't have children, it's just a complication," Alex said.

Because of the PCOS, their path has included trying fertility methods, which can become a financial burden.

"It's a lot of doctors' appointments and shots," Alex said. "It's a lot of conversations and talking it through. [Erik] was awesome whenever we were doing injections and stuff. He was very supportive of me."

Trying like this hasn't been working and a few months ago, the DeHavens started talking about another option.

To read the full story, visit our partners at Vype.