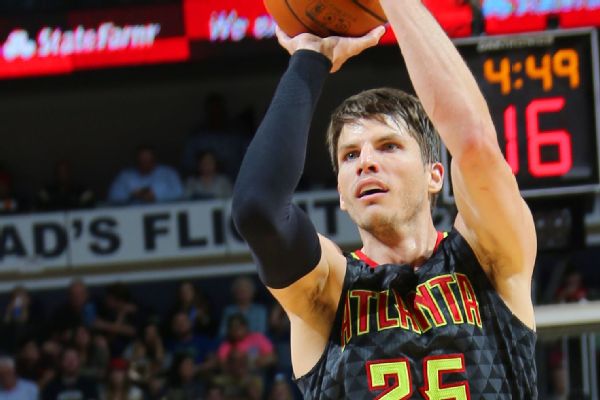 The Cavaliers and Hawks are in deep discussions on a deal that would send veteran shooter Kyle Korver to Cleveland, sources confirmed to ESPN on Thursday.

Korver addressed the potential deal following Atlanta's win Thursday night in New Orleans and spoke as though he was leaving.

The 14-year veteran said he had an emotional meeting with coach Mike Budenholzer about the news and that he reflected on "a lot of things" as he watched the Hawks' 99-94 victory over the Pelicans from the bench despite being active.

"There's definitely mixed emotions," Korver said. "There's a lot of hard ties to Atlanta, for a lot of reasons. A lot of friendships, relationships. It's where I had my best basketball years, honestly. It's where I had all my kids. It's hard to leave that behind.

"Obviously it's a great opportunity for me to go to Cleveland. So I'm very excited about that part of it. But there's a lot of relationships that I care about here that I'm going to miss.

"From a basketball perspective, [Cleveland is] a great, great fit for me. And I know that."

Under the current framework of the trade, the Cavs will send Mo Williams, Mike Dunleavy and a protected 2019 first-round pick to the Hawks for Korver, sources said.

The teams are still in discussions about moving Dunleavy to a third team, the sources said, and the trade was not finalized Thursday night.

The Vertical first reported the talks between the teams.

In a separate deal, the Cavs have agreed to send their 2017 first-round pick toPortlandin exchange for their 2018 first-round pick, which the Trail Blazers already own, a source told ESPN. This would enable the Cavs to use their 2019 pick to make the deal with Atlanta. Under league rules, teams cannot trade first-round picks in consecutive seasons.

Korver, who is earning $5.2 million this season in the final year of his contract, is averaging 9.5 points per game and shooting 40.9 percent on 3-pointers. He was an All-Star in 2015.

The Cavs have been looking for depth following the loss of J.R. Smith for three months to a broken thumb. They also lost Chris Andersen for the remainder of the season to a torn ACL. In addition, Kyrie Irving missed his third straight game Wednesday with hamstring tightness, and Kevin Love was out with food poisoning that caused him to lose 10 pounds.

"It's slowing up our process because of what we're trying to build," said LeBron James, who also has been ill.

ESPN first reported Sunday that the Hawks had made the decision to field trade calls from interested teams on Korver as well as All-Star forward Paul Millsap and veteran swingman Thabo Sefolosha. All three players can become free agents this summer.

Millsap said after Thursday night's game that it's "not my place" to comment on the organization's direction.

Dwight Howard, who signed a three-year, $70.5 million deal with Atlanta over the summer, was asked whether he thinks the Hawks are going in a different direction than what he signed on for.

"That's a tricky question to answer," he said. "It's basketball. It's a serious business. You never know what can happen, with any team. You never know. I mean, I didn't expect this to happen, but like I said, you never know.

"I'm keeping my mouth shut, my head down and play basketball. I'm not getting involved in none of that stuff."

ESPN's Marc Stein and Justin Verrier contributed to this report.