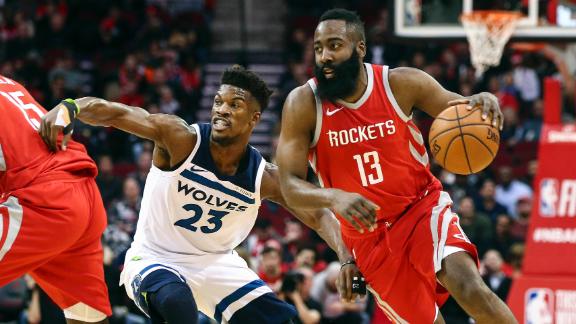 HOUSTON --James Harden is back. His game will be soon, the Houston Rockets are quite sure.

Harden's return from the most significant injury of his nine-year career was a success for two reasons. The Rockets pulled off a convincing win Thursday night over a quality opponent, 116-98, against a Minnesota Timberwolves team that has moved into third in the Western Conference standings. And Harden had no issues with the hamstring that he strained on New Year's Eve, causing him to sit out seven games.

Harden was about as happy as he'll ever be after a night when he shot 3 of 15 from the field.

"It felt good to be back on the court, just that atmosphere, dribbling the basketball," said Harden, who finished with 10 points and seven assists in 26 minutes. "Those seven [games] felt like an extremely long time, but the feeling and the vibe feels great. We got a win, and that's all that matters."

The Rockets (31-12) are now 16-0 when Harden, Chris Paul and Clint Capela all play. That perfection will be put to the test Saturday when the Golden State Warriors come to the Toyota Center for an ABC prime-time showcase.

It's probably a bit optimistic to expect Harden to be in MVP frontrunner form for the defending champions' visit.

"He's rusty," Houston coach Mike D'Antoni said, noting that the hamstring injury kept Harden from working on his game until late in the recovery process.

D'Antoni won't know details until consulting with the Rockets' medical and athletic training staff, but Harden will remain on a minutes restriction. Harden actually played an extra minute in his return, but the Rockets will take their time working him up to his normal 36-minute range, whether he likes it or not.

"I was lucky I didn't get bumped into tonight," said D'Antoni, playfully referencing his brush with Blake Griffin during the Rockets-LA Clippers game that nearly turned into a "Monday Night Raw" episode. "Yeah, there were some stares over there. It was like, 'Seriously?' I told him to talk to [athletic trainer Keith Jones], don't talk to me."

With a smile, Harden cracked: "He almost got tackled tonight. Nah, he just did his job. We have the best training staff in the league by far, so you've got to listen sometimes and just take it for what it is. You've got to get better and those minutes will go up."

So, surely, will Harden's point totals.

Harden, the league's scoring leader, had his scoring average dip a half point to 31.7 games due to his first game with fewer than 20 points all season. He barely extended his double-digit scoring streak to 227 games, the second-longest such streak in the league behindLeBron James' ludicrous 834 games.

"Shots felt good," said Harden, who missed his first six attempts. "They just didn't go in. It'll be like that sometimes. Put some work in tomorrow, get ready for Saturday's game."

But Houston, even missing suspended wings Trevor Ariza and Gerald Green, didn't need Harden at his best to cruise to a win over a Timberwolves team that had won 12 of its previous 16 games. It certainly helped to have sixth man Eric Gordon put up 30 points on 11-of-19 shooting, his third 30-plus-point performance in the past seven games -- a total he hit only twice in his first 109 outings with the Rockets.

D'Antoni emphasized that the Rockets played with the edge, the toughness that had been missing too often during their recent mini-slump (eight losses in the previous 13 games).

"We've got to do that to have a chance to do what we want to do," D'Antoni said. "We're going to be pretty good because we score enough points, so we're going to win some games. But to go deep in the playoffs, if we want to win, we have to have a toughness mentally that's been missing."

To go deep in the playoffs, the Rockets also have to have Harden performing at his standard superstar level. That didn't happen in his return, but the Rockets are happily confident it's on the horizon.

"Oh my god, it is good to have him back," Capela said after his 20-point night. "It can only get better for him, so we're all excited."

Rockets win in Harden's return
James Harden returns for his first game of the New Year after missing seven games with a left hamstring strain and Eric Gordon shines dropping 30 points off the bench to lead the Rockets to a 116-98 victory.