Greinke eager to watch and learn with Astros 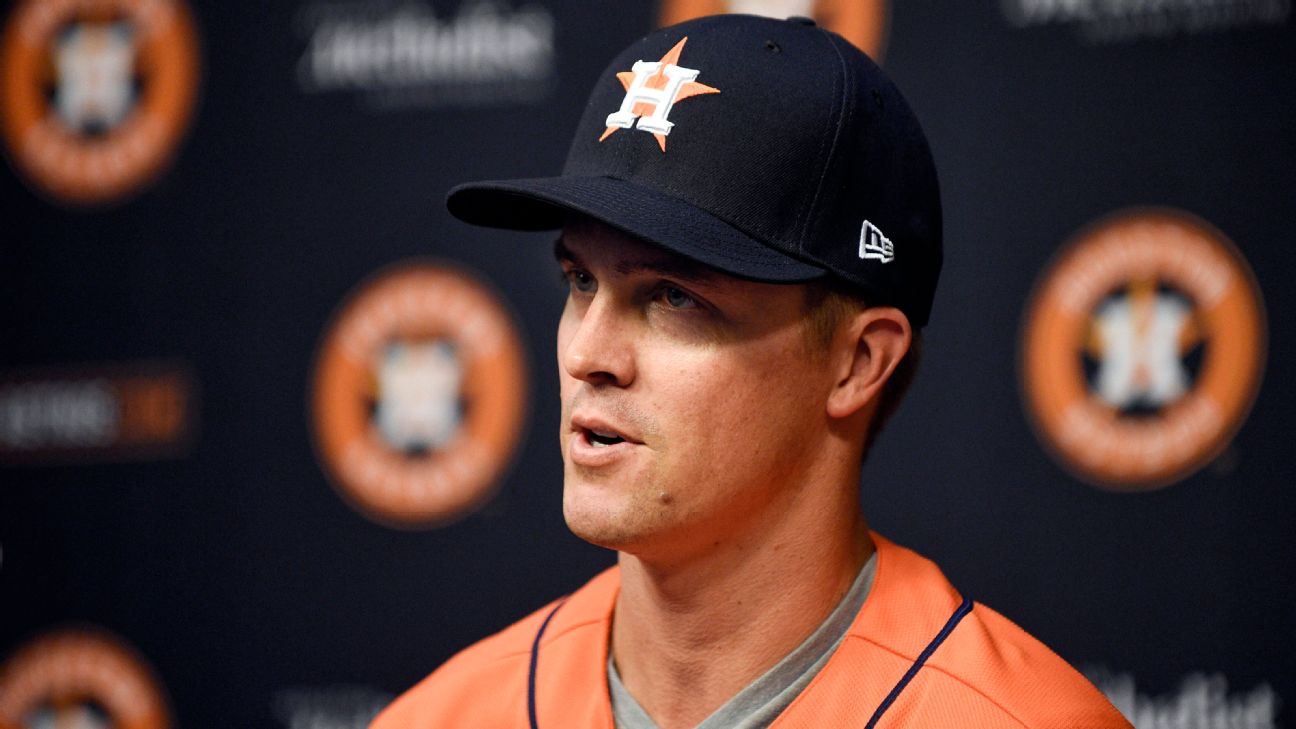 HOUSTON -- Zack Greinke has admired the Houston Astros from afar. Now he gets to see them close up, and the newly acquired ace is looking forward to that opportunity.

"Probably just being able to watch them play every day ... and just being able to be around some really good players and some talented athletes with a lot of baseball knowledge," he said Friday at an introductory news conference.

"And I think anytime you're on a new team, but especially a team like this, there's a lot of learning you can do. I think they'll be more fun to watch than your average team, so that will be nice, too, watching good baseball," he said.

The American League West leaders got Greinke from the Arizona Diamondbacks for four prospects in a startling trade Wednesday minutes before the deadline to complete deals. The 35-year-old righty joins All-Stars Justin Verlander and Gerrit Cole in an imposing rotation.

Since the trade, many have declared that Houston has the best rotation in baseball.

"It's up there," Greinke said. "There's some other good ones, though. I haven't seen the American League much, but there's some good ones in the National League, that's for sure."

The Astros began the day with an eight-game division lead over Oakland. Houston won the 2017 World Series -- Greinke, a six-time All-Star, has never gotten past the NL Championship Series. He's 3-4 with a 4.03 ERA in 11 postseason starts.

"This is all about one thing and it's about winning a championship this year," Astros general manager Jeff Luhnow said.

"He's one of the best pitchers in the league," Hinch said. "And he joins a couple of guys, really a handful of guys that are really good. He's a very interesting guy. He's evolved as a pitcher. He's a creative pitch-maker with elite stuff and a cerebral approach that is arguably second to none in the big leagues."

The Astros got Greinke along with starter Aaron Sanchez, reliever Joe Biagini and catcher Martin Maldonado just before the trade deadline.

Greinke was 10-4 with a 2.90 ERA in 23 starts this season and provides a pronounced upgrade over the variety of players they've cycled through to start behind Verlander, Cole and Wade Miley this season.

Greinke's addition gives the Astros four starting pitchers with ERAs in the top 15 in the majors this year. Verlander is fifth with a 2.73 ERA, Cole is 10th at 2.87, Greinke ranks 11th and Miley is 14th at 3.06. Verlander leads the AL in wins (14) and ERA, and Cole tops the majors with 216 strikeouts.

"Smoltz said, 'Man, you really did a great job of putting that together,'" Crane said. "And I said, 'Yeah, it looks like Smoltz, [Tom] Glavine and [Greg] Maddux.' And he said, 'No, no, no, no, you guys are way better than we ever were.' He was very complimentary. So getting it from a guy like that who was on some great teams is really special. You can rate them, but we've got to go pitch and win games."
Report a correction or typo
Related topics:
sportsespnmlbhouston astroszack greinke
Copyright © 2020 ESPN Internet Ventures. All rights reserved.
More Videos
From CNN Newsource affiliates
TOP STORIES