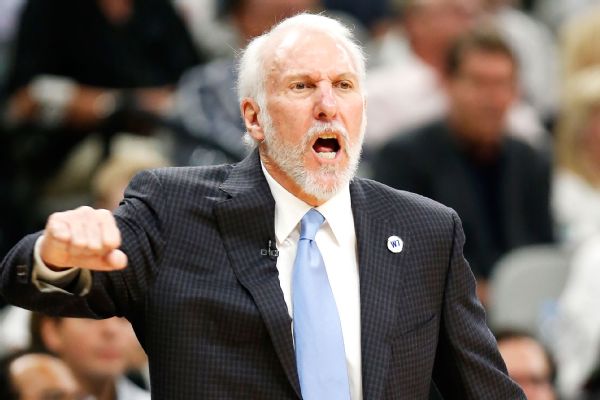 San Antonio Spurs coach Gregg Popovich believes Washington Wizards assistant coach Sidney Lowe deserved a harsher penalty than the fine levied by the NBA for standing on the court and yelling during the New York Knicks' final possession of a loss on Thursday.

"I think they got off easy," Popovich said, according to the San Antonio Express-News. "What if that shot costs a playoff game because somebody does that? Maybe that affects a coach being fired. Maybe a franchise winning a series. So if you think about it, maybe it's worth it for $5,000 or $10,000 to go do that."

The controversial play came Thursday night at Madison Square Garden with the Knicks trailing by three points and fewer than 10 seconds remaining. Carmelo Anthony drove into the lane, then passed it off to a waiting Courtney Lee in the corner.

Despite having an open look, Lee passed up taking the potential game-tying shot. Lee said after the game that Lowe was yelling out defensive assignments and that he mistook him for a player, which caused him to pass up the shot.

"I've been moaning and groaning about it for a decade about everybody standing up on the bench when somebody shoots a 3," Popovich said. "If you were at your kid's junior high game, you'd tell the kids to sit down and behave themselves. So why do we get to get up and do that kind of crap?"