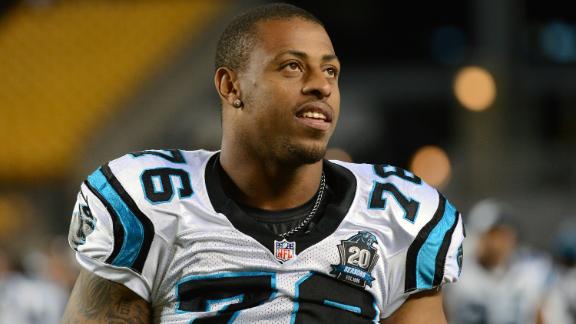 An attorney representing the NFL Players Association will also be in attendance for the meeting, the source said.

Hardy, set to become an unrestricted free agent on March 10, has been on the commissioner's exempt list since mid-September.

He remained on the list after a Mecklenburg County judge dropped his domestic violence charges on Feb. 9 because accuser Nicole Holder refused to cooperate with the district attorney's office after reaching a financial settlement with Hardy.

The NFLPA is working with the NFL on behalf of Hardy to get the 2013 Pro Bowl player reinstated immediately, a league source told ESPN.com.

The NFLPA is arguing that should the NFL find in its own investigation that Hardy violated the league's personal conduct policy, any suspension should revert to the old policy.

The league adopted a new personal conduct policy in late August, allowing it to suspend a player believed to have been involved in a domestic violence case for a minimum of six games.

Previously, the suspension for a first offense was two games. Hardy was arrested on May 13 and found guilty of assaulting and threatening Holder on July 15 by a Mecklenburg County judge.

That verdict was set aside when Hardy appealed and asked for a jury trial, which never occurred because the charges were dropped.

When a fan posted on Hardy's Instagram page that "this ain't Charlotte," Hardy replied, "They kicked me out of there lol."

The Panthers are not expected to re-sign Hardy, who received $13.1 million last season as the team's franchise player despite playing in only one game.

The NFL began conducting its own investigation immediately after the charges against Hardy were dropped. An attempt to get the evidence from Hardy's July 15 trial was unsuccessful because that evidence had been returned to the district attorney's office and Hardy's attorney before the motion was filed.

The district attorney's office told ESPN.com that it does not release evidence. Hardy's attorney, Chris Fialko, has not returned phone calls or emails.