Goran Dragic is NBA's most improved 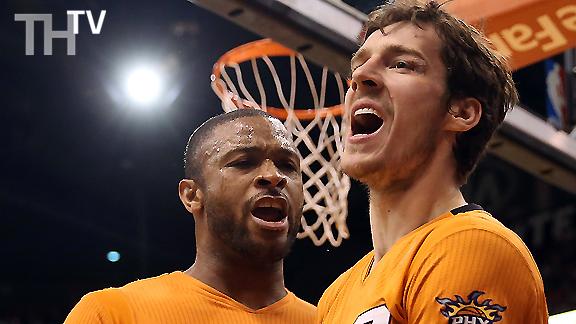 Dragic received 408 of a possible 1,134 points, including 65 first-place votes, from a panel of 126 sports writers and broadcasters throughout the United States and Canada. Lance Stephenson of the Indiana Pacers (158 points, 13 first-place votes) and Anthony Davis of the New Orleans Pelicans (155 points, 16 first-place votes) finished second and third, respectively.

Led by Dragic, the Suns were one of the league's biggest surprises, improving 23 games from last season while narrowly missing the playoffs with a 48-34 record. Dragic claiming the award came one day after Jeff Hornacek finished second to San Antonio's Gregg Popovich in coach of the year voting.

Dragic, who entered the season with a career scoring average of 9.5 points a game, put up a career-best 20.3 a game to go along with averages of 5.9 assists and 3.2 rebounds. He shot just over 50 percent from the field.

Congratulations to @Goran_Dragic winning Most Improved. He is a elite player. I'm glad that I've had a chance to see him grow over the yrs