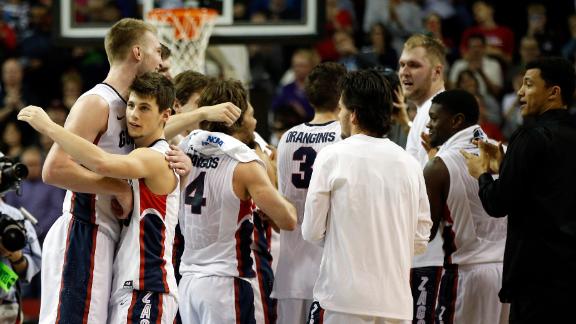 SEATTLE -- Kyle Wiltjer and Kevin Pangos met at half court for a hug and a high-fivewhile coach Mark Few pumped his fists on the sideline.

Gone are the questions about Gonzaga's five-year run of failing to advance from the first weekend of the NCAA tournament.

The second-seeded Bulldogs are back in the Sweet 16 after racing past No. 7 seed Iowa 87-68 on Sunday in the South Region.

Now the question is just how far these Bulldogs will go.

"There's no greater feeling than this, because I haven't been able to experience it, and most of the guys in the locker room haven't," Pangos said. "So for us to be able to get past this is definitely a great feeling. But it's not like we were stressing over what people were talking about. We just wanted to do it selfishly for ourselves and our fan base."

Wiltjer scored 13 of his 24 points during Gonzaga's flawless first half, Domantas Sabonis added 18 points and the second-seeded Bulldogs advanced to the round of 16 for the first time since 2009.

After five straight departures on the first weekend, the Bulldogs (34-2) are back in the regional semifinals, thanks to an efficient offensive performance in the first 20 minutes that Iowa could never overcome.

Waiting in Houston on Friday night is No. 11 seed UCLA, the same Bruins program Gonzaga fell short against in the round of 16 in 2006.

"It is kind of a weight off because a lot of people doubted us to even get to the 16 this year and we have a great team," Gary Bell Jr. said.

Gonzaga will make just its third appearance on the second weekend of the tournament since 2001. After looking unimpressive in an opening victory over 15th-seeded North Dakota State, the Bulldogs dominated Iowa.

Wiltjer made his first six shots before finally missing a 3-point attempt midway through the second half. Sabonis added eight in the first half, including a thundering left-handed dunk that was followed by a scream that had KeyArena roaring just like Gonzaga's home gym.

Wiltjer was nearly perfect. He made 10 of 12 shots and 4 of 6 3-pointers. His 24 points came in just 25 minutes, slowed by early foul trouble. Pangos added 16 points and four 3-pointers, while Bell scored 10.

"When you get on a roll and my teammates do such a good job of finding me, you just get more and more confident," Wiltjer said. "That's what I was doing in the first half."

The Bulldogs could use the first 20 minutes as a blueprint for offensive efficiency to show future teams. They passed with precision, scored quickly when opportunities developed and were deadly from behind the 3-point line. Wiltjer hit a trio of 3-pointers, including a 24-foot swish that gave Gonzaga a 34-19 lead and capped a 16-4 run. But Pangos and Bell -- Gonzaga's defensive stopper -- both added a pair of 3s to complement what was working on the interior.

Przemek Karnowski scored nine points and had four assists, all in the first half, and Sabonis' 18 points off the bench were his most since Jan. 15 at Pepperdine.

"This team is so much fun to be associated with when we're playing like that and we're in attack mode and sharing the basketball," Few said.

Iowa scored eight of the first 10 points of the second half with Uthoff knocking down three jumpers to get within 11. The Hawkeyes had a chance to cut the deficit under 10, but a turnover byMike Gesellled to Pangos' third 3-pointer and the Bulldogs' lead was back to 14.

Iowa trimmed the lead to 11 on multiple occasions but could never get the deficit to single digits. Gonzaga finally pulled away for good with a seven-point flurry, capped by Pangos' corner 3-pointer with 6:35 left for a 69-49 lead.

"We obviously got down into a hole, and you don't want to do that," Iowa coach Fran McCaffery said. "They started getting comfortable shooting the ball, and that was unfortunate."

Iowa: Iowa was trying to reach the round of 16 for the first time since 1999. ... The combination ofGabriel Olaseni and Adam Woodbury, Iowa's two big bodies in the middle, couldn't match Gonzaga's interior game. They combined for 6 points and 5 rebounds and both fouled out.

Gonzaga: The Bulldogs hit 12 of 16 shots to start the game and shot 62 percent in the first half. Gonzaga was the best shooting team in the country at 52 percent. ... Gonzaga outscored Iowa 40-32 in the paint.

Gonzaga: The Bulldogs will face UCLA in the Sweet 16 on Friday in Houston.

Gonzaga Brilliant In Victory
Dick Vitale breaks down why he was impressed by Gonzaga's NCAA tournament victory over Iowa.

Sharp-Shooting Zags Make Sweet 16 Return
No. 2 seed Gonzaga snapped a string of Round-of-32 misfortune, shooting 61.5 percent from the floor en route to a 87-68 win over No. 7 seed Iowa.

Gonzaga Brilliant In Victory
Dick Vitale breaks down why he was impressed by Gonzaga's NCAA tournament victory over Iowa.