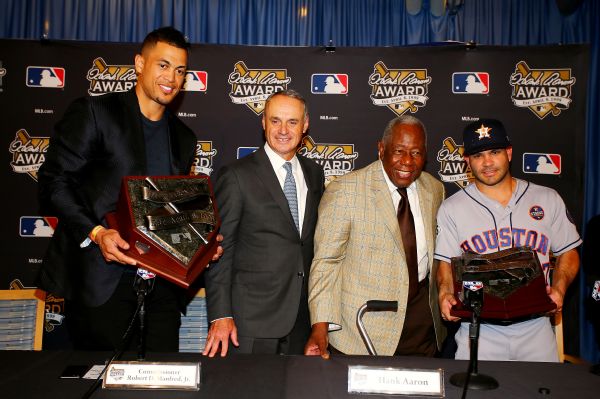 LOS ANGELES -- Giancarlo Stanton and Jose Altuve received the Hank Aaron Award on Wednesday at Dodger Stadium as the top hitters in their respective leagues. After a brief news conference, Altuve left the interview room and headed to the field to take part in Game 2 of the World Series as the Houston Astros' starting second baseman.

Amid speculation that he could be on the trading block this winter as the Miami Marlins look to shed payroll, Stanton said he has yet to speak to Derek Jeter and the team's new ownership group about his future.

Stanton will get a better idea of his next stop sometime in the next few weeks.

"I think we're all going to take care of that after the World Series,'' Stanton said.

When asked if he's interested in staying with the Marlins even if the team goes into rebuild mode, Stanton was noncommittal.

"I'll figure out those plans and the specifics when we get there,'' Stanton said. "I don't have any stamped-out ideas for that.''

The Aaron award, which was established in 1999, is voted on by fans and a panel of players that includes Aaron and fellow Hall of Famers Roberto Alomar, Johnny Bench, Craig Biggio, Ken Griffey Jr., Eddie Murray and Robin Yount.

Stanton, who previously won the award in 2014, joined Barry Bonds, Alex Rodriguez, Albert Pujols, Miguel Cabrera, Manny Ramirez, David Ortiz, Jose Bautista and Jeter as the ninth multiple-time winner of the award. Stanton led the majors with 59 home runs, 132 RBIs and a .631 slugging percentage this season. His 59 homers were the most in the majors since Bonds hit a record 73 for the San Francisco Giantsand Sammy Sosa hit 64 for the Chicago Cubs in 2001.

Altuve batted .346 for the Astros to win his third career batting title, and he became the first player in MLB history to lead his league in hits outright for four consecutive seasons. He also ranked among the AL leaders in runs (112), stolen bases (32), OPS (.957), on-base percentage (.410) and slugging (.547).

After commissioner Rob Manfred introduced the two winners, there was a warm exchange during the news conference when Aaron turned to Altuve on the dais and said, "I want to congratulate you for all the things that you have done, really. You have been wonderful. There are not many people I would pay to go see, but I would pay to go see you.''

Altuve said he was more nervous accepting the award than during Game 1 of the World Series on Tuesday.

"I feel blessed to be here,'' he said. "I thank God for the opportunity to be sitting here with Giancarlo and the commissioner and Mr. Hank. What can I say? Thanks to all the Hall of Famers and fans that made this dream come true. This is so important for me.''
Report a correction or typo
Related topics:
sportsespnmlbmiami marlinsjose altuvegiancarlo stantonhank aaron awardhouston astrosderek jeter
Copyright © 2020 ESPN Internet Ventures. All rights reserved.
More Videos
From CNN Newsource affiliates
TOP STORIES