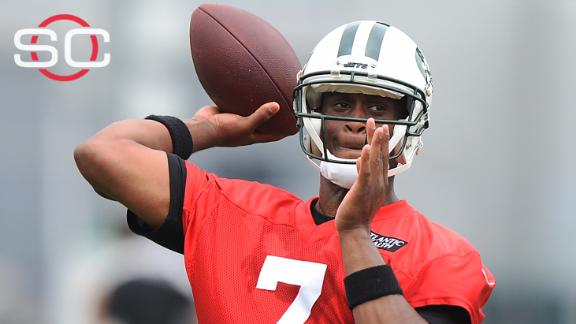 FLORHAM PARK, N.J. -- New York Jets quarterback Geno Smith, addressing reporters for the first time since his infamous locker-room altercation, said Monday he has no plans to file charges against former teammate IK Enemkpali for breaking his jaw with one punch.

Smith refused to provide any details about the incident, which occurred four weeks ago, but he painted himself as an innocent victim. He said "some things will be clarified" once the NFL completes its investigation into a possible personal-conduct violation by Enemkpali -- suggesting he did nothing to provoke it.

Even though he was on the receiving end of what coach Todd Bowles called "a sucker punch," Smith was criticized by fans and media for allowing the situation to escalate. Sources said he pointed his finger in Enemkpali's face. His leadership was questioned.

Smith didn't respond to direct questions of that nature, but he clearly felt he had no culpability.

"Things happen in life," he said. "Unfortunately, it happened to me, but I'm not going to hang my head. I'm not that type of guy. I'm not weak-hearted."

Smith wouldn't say if Enemkpali apologized to him. The dispute was over $600 -- the amount of a plane ticket that Enemkpali bought for Smith to attend his youth football camp in Texas. Smith was unable to attend and didn't reimburse him.

The third-year quarterback declined to say why he didn't promptly repay Enemkpali, who was released immediately after decking Smith. Asked if he has done so since the incident, Smith replied, "Next question."

"There's still an investigation," he said. "It's not important for me to say anything about it. That will clarify more things than anything."

Enemkpali was claimed by theBillsafter his release, only to be be waived when Buffalo set its 53-man roster. On Monday, Enemkpali was signed to the Bills' practice squad.

At the time, Bowles said "it takes two to Tango." Cornerback Darrelle Revis echoed that sentiment, saying both players bear responsibility. It was an embarrassing incident for the Jets, but not for Smith, he said Monday.

Smith, who won't play Sunday in the season opener, repeatedly said his only focus is this week's game. At one point he said: "I don't want to keep talking about it. I hate the fact that we have to" discuss it.

"There's a lesson learned in every situation, good or bad," he said. "Obviously, I've learned something, but I don't want to keep talking about it."

What did he learn?

"I'll keep that to myself," Smith said.

On Monday, Smith participated in positional drills for the first time since the incident, which required surgery. The timetable for his return hasn't changed, according to Bowles, who said he expects Smith to miss the first four games.

Ryan Fitzpatrick will start, with rookie Bryce Petty the No. 2 quarterback. Bowles didn't rule out the possibility of adding a veteran after Week 1, when that player's full salary wouldn't be guaranteed. That means Josh Johnson and perhaps even Matt Flynn, both of whom were released on Saturday, remain options.

When Smith is healthy, he won't automatically regain his starting job, Bowles said. He declined to address his status, saying, "I can't think about hypothetical situations."

Smith said he has been pain-free for two to three weeks, adding that he has lost only a few pounds. Eating, he said, was hard the first couple of days.

He said the entire ordeal has been "tough," adding the "most disappointing part is not being able to practice and play. Everything else takes care of itself. I'm not putting my mind in a place where it shouldn't be."

Smith thanked his teammates, coaches and family for their support.

"It's always good to see guys get back on the field when they've been down a little bit," wide receiver Brandon Marshall said.

Bowles said it's "not an awkward spot" for Smith because an injury is an injury, regardless of how it occurred.

Obviously, this was different because of its unique nature. When it was suggested to Smith that the fans are owed an explanation because they lost their starting quarterback in a heartbeat, off the field, he replied: