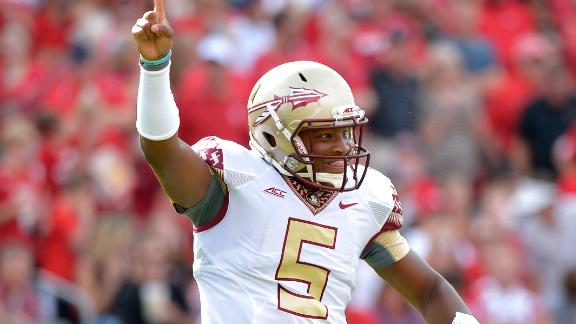 Instead, the Heisman Trophy winner -- returning from a one-game suspension -- focused on how the top-ranked Seminoles keep finding ways to win when things aren't running smoothly.

Winston threw for 365 yards and four touchdowns to help FSU rally from 17 down to beat the Wolfpack 56-41 on Saturday night, extending the nation's longest active winning streak to a program-record 20 games.

Sure, the defense had fits trying to stop the Wolfpack and quarterback Jacoby Brissett. And the Seminoles (4-0, 2-0 Atlantic Coast Conference) had four turnovers, three coming from Winston, to match their season total.

Yet after tough wins against Oklahoma State, Clemson and now NC State, Winston still believes his team is the best in the country.

Rashad Greene hauled in 11 passes for 125 yards and the go-ahead score for the Seminoles, while Karlos Williams ran for three scores -- the last with 2:07 left to seal it.

On a night when both teams topped 500 total yards, Winston and the Seminoles won on the same field where they suffered their last league loss two years ago.

"We can take a punch and stand up and compete," coach Jimbo Fisher said. "Now I'd rather start blocking and dodging some and playing, but there's something to that now. I'm going to tell you what: that takes time. That's a culture. That's the way you think, the way you believe in each other and there's a lot of inner trust in that locker room."

He shook off a third-quarter interception to keep the Seminoles pushing forward against the Wolfpack (4-1, 0-1) and Brissett, a Florida transfer who was on the sideline for the Gators during FSU's last loss in November 2012. Brissett threw for 359 yards and three touchdowns, put up a couple of highlight-reel plays and turned much of the game into a quarterback duel with Winston.

"I wasn't too much worried about him," Brissett said. "I was just going out there trying to win the game and make plays, and it wasn't enough."

Playing its first home game against the nation's No. 1-ranked team, NC State led 24-7 after the first quarter and 38-28 midway through the third quarter after Shadrach Thornton's 10-yard scoring run.

But Winston directed a quick touchdown drive, then capitalized on Brissett's fumble by zipping the ball to Greene -- and just past the outstretched arm of Jack Tocho -- for a 42-38 lead with 3:24 left in the third.

Williams' 1-yard scoring run pushed that lead to 49-38 early in the fourth, then Winston came through with two key third-down conversions in the final minutes after the Wolfpack kicked a field goal to make it a one-possession game -- the last being a 20-yard run on third-and-11 with about 3 1/2 minutes left.

Williams capped that drive with his 12-yard score, giving him a career-best 126 yards rushing as FSU won its 17th straight against an ACC opponent.

It was a frustrating finish for NC State considering its promising start. Brissett connected with freshman Bo Hines for a 54-yard touchdown pass just 18 seconds into the game.

Brissett later came up with a jaw-dropping play, ducking under the grasp of a Seminoles defender in the pocket then staying on his feet to break away from another near the sideline to throw an 8-yard scoring pass to Johnathan Alston for a 24-7 lead with 2:06 left in the opening period.

It marked the first time in program history that FSU had given up 24 points in the opening quarter, though the Seminoles closed to within 24-21 by halftime.

"They played their hearts out," Wolfpack coach Dave Doeren said. "There's a lot of things obviously that we've got to do better to stop a team like that."

Winston, FSU Erase 17-Point Deficit For Win
Jameis Winston threw for 365 yards and four touchdowns in his return from suspension, helping No. 1 Florida State rally from 17 down to beat North Carolina State 56-41.