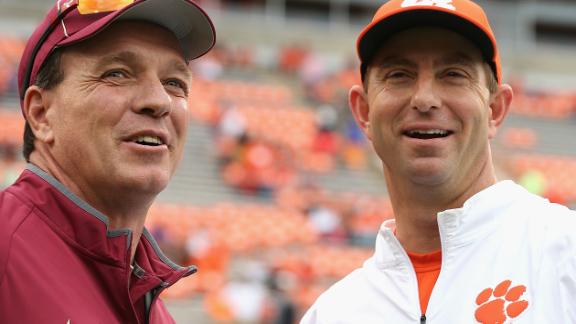 Michigan landed the top prize of national signing day when No. 1-ranked Rashan Gary announced for the Wolverines live on ESPN2, but Florida State, Alabama and Texas were Wednesday's biggest winners.

Despite adding third-ranked cornerback Kristian Fulton and seven of the top 10 players in Louisiana, LSU dropped from No. 1 to No. 3; Alabama also passed the Tigers in the class rankings.

"Our coaches did an outstanding job of building personal relationships, some of which are two, three or four years old," Florida State coach Jimbo Fisher said. "It really doesn't matter where we rank. I want to rank the classes after they leave. But I'm aware of where we're ranked at, and it's a testament to how hard our staff worked."

Texas entered the day in a spot unfamiliar to most Longhorns fans. After years of dominating the Big 12 recruiting wars, Texas had the 32nd-ranked class, but the Longhorns shot up the rankings to No. 10 after top 50 prospects Jeffrey McCulloch and Brandon Jones committed there live on ESPNU, and ESPN 300 outside linebacker Erick Fowler flipped from LSU. The Longhorns also added ESPN 300 defensive tackles Jordan Elliott, Marcel Southall and Chris Daniels on Wednesday, giving them four four-star defensive tackle commits.

Texas now has landed nine four-star recruits since Jan. 28 and eight in the last 24 hours.

The Rebels landed No. 41 Deontay Anderson, No. 66 A.J. Brown and No. 256 Jacob Mathis, which pushed them tofourth in the class rankings.

Ohio State couldn't seem to land one of their recruits.

"We just laughed about it," director of player personnel Mark Pantoni said after the last of the 18 signatures had officially arrived at Ohio State. "[Wide receiver] Binjimen Victor was the last one, and we kept waiting for it to come and he kept saying he sent it. [Wide receivers coach] Zach Smith had been sitting there for about five minutes, and then somebody figured out we were out of paper.

"All we could do was laugh about it."

Five-star defensive tackle Derrick Brown announced for Auburn live on ESPN2 and it finished with the No. 9 class. Earlier Wednesday, the Tigers landed No. 2 receiver Nate Craig-Myers. Brown is the top overall recruit in Georgia and ninth-ranked prospect in the country, and he cited Auburn assistant Rodney Garner as a central factor in his recruitment. With Craig-Myers' addition, Auburn has landed three receivers ranked in the top 15 nationally. Craig-Myers is the highest-ranked receiver to pick the Tigers since 2006.

USC gobbled up three new ESPN 300 prospects Wednesday, with each from the Southeast. No. 3 safety Jamel Cook flipped from Florida State to the Trojans, eighth-ranked offensive tackle E.J. Price surprised many by picking USC, and 32nd-ranked receiver Keyshawn Young turned down Michigan, Louisville and Florida State for the Trojans. USC later picked up No. 10 cornerback Jackie Jones and finished 11th overall.

ESPN 300 safety Brandon Burton got signing day started when he announced for UCLA live on ESPN's SportsCenter at midnight ET Wednesday. Burton, the nation's No. 255 player and the 13th-ranked safety in the nation, selected the Bruins over Oklahoma, Florida State, Notre Dame and Ohio State.

Clemson won the first big battle of signing day when cornerback Trayvon Mullen, the No. 18 player in ESPN 300, committed to Clemson live on ESPNU. His decision surprised many as he was projected to either pick LSU or Louisville. However, Mullen, the second-ranked cornerback, said he was sold on the "different feel" he got while on campus,and his decision pushed the Tigers to the No. 8 spot in the rankings.

"I just went with my heart," Mullen said. "I have a real opportunity to come in and play at Clemson, and that was important. But the different feel that I got while walking around campus at Clemson told me it was the right place for me."

In a world where most programs use email to verify letters-of-intents, old-fashioned technology almost kept Ohio State from adding to its No. 5 class. While waiting for the signatures of recruits Wednesday, the fax machine in the Woody Hayes Athletic Center ran out of paper.

"We just laughed about it," director of player personnel Mark Pantoni said after the last of the 18 signatures had officially arrived at Ohio State. "[Wide receiver] Binjimen Victor was the last one, and we kept waiting for it to come and he kept saying he sent it. [Wide receivers coach] Zach Smith had been sitting there for about five minutes, and then somebody figured out we were out of paper." 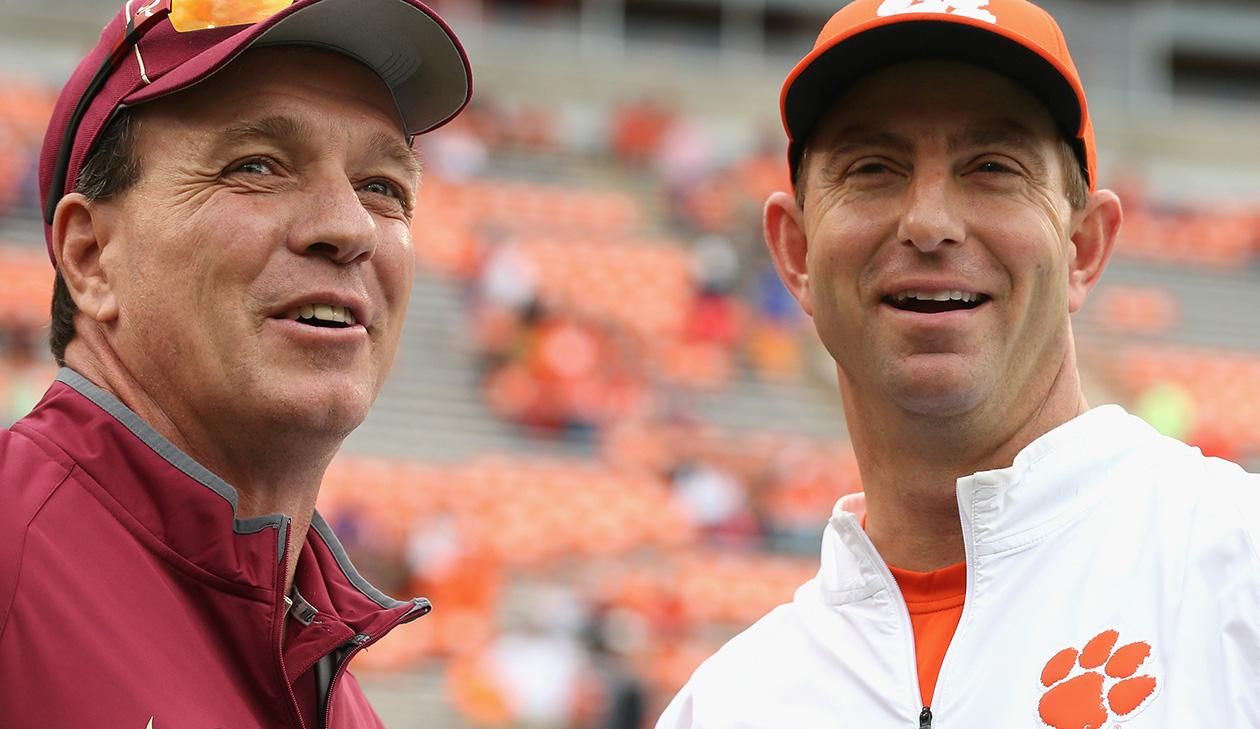 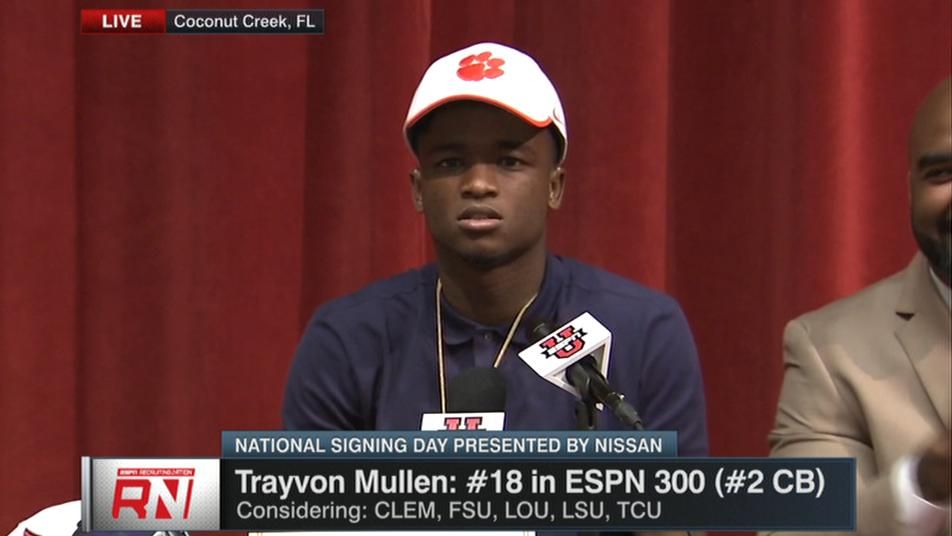 Mullen commits to Clemson
Trayvon Mullen, the No. 2 CB in the ESPN 300, discusses his commitment to Clemson and how he feels he will fit into the Tigers' defense. 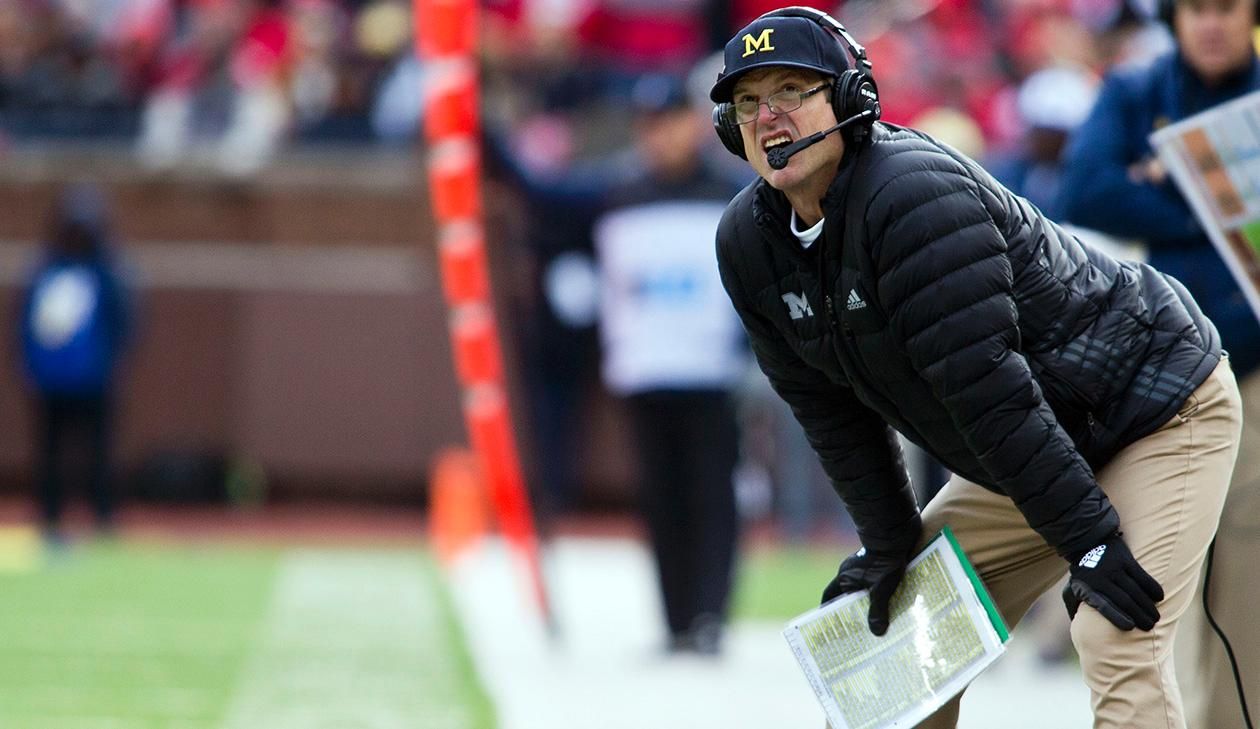