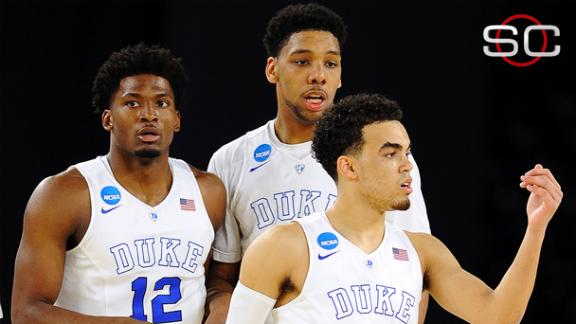 HOUSTON -- Mike Krzyzewski is living in the moment with his youngest team ever, not thinking too much about the significance of his latest trip to the NCAA Final Four.

With their trio of freshmen starting, theDuke Blue Devilsare going to their 16th Final Four, and a record-tying 12th for Krzyzewski, after a 66-52 win overGonzagaon Sunday to wintheSouth Regional.

"Just being with these kids and sharing this moment and this Final Four, I'm so happy, I'm so happy for them and to be with them," Coach K said. "I love my team. ... They're taking me to Indy, which is kind of neat."

Justise Winslow, the freshman playing at home in Houston, finished with 16 points after rolling his left ankle early in the game and had a big 3-pointer in the closing minutes. Tyus Jones scored 15 points, while Jahlil Okafor had nine points and eight rebounds.

"Coach has been to however many Final Fours, but this is his first one with this group, and that's what means the most," Winslow said. "Living in this moment, living right now."

Duke (33-4), the region's No. 1 seed, is going to Indianapolis to play Michigan State in the Final Four. At the Westgate SuperBook, the Blue Devils opened as a 4.5-point favorite over the Spartans. The other national semifinal game Saturday has undefeatedKentucky playing Wisconsin.

With 12, Krzyzewski matches UCLA's John Wooden for the most Final Four appearances by a head coach. There are three coaches with seven, including Michigan State's Tom Izzo.

Duke's last Final Four and national title was in 2010, when the Blue Devils were also the No. 1 seed in the South Regional and had to go through Houston.

No. 2 seed Gonzaga (35-3) had taken a 38-34 lead less than four minutes into the second half, putting the Blue Devils in their largest deficit of this tournament.

But Gonzaga later missed a chance to tie the game when Kyle Wiltjer missed an open layup with just under five minutes to play.

"You make that thing 499 times out of 500. It was just a fluke," coach Mark Few said. "It just didn't fall in. When that kind of moment happens, you've just got to shake your head, and it's not your night."

Matt Jones, a sophomore starter for the Blue Devils, had 16 points with four 3-pointers. Quinn Cook, the senior guard who was part of Duke's opening-round upset losses in 2012 and 2014, had 10 points.

Winslow's 3-pointer from the left wing with 2:28 left stretched the lead to 60-51 in a homecoming for the forward, who turned 19 on Thursday.

After coming down awkwardly on a missed layup less than eight minutes into the game, Winslow got his left ankle rewrapped but wasn't out long.

"I rolled it pretty bad," he said. "It was a little stiff, a little sore, but I knew you never get this chance again, so I just gave it my all."

Wiltjer, the transfer from Kentucky who as a freshman was part of the Wildcats' 2012 national championship, had 16 points. Byron Wesley had 10.

Gonzaga has been to 17 consecutive NCAA tournaments but never the Final Four.

This was only Gonzaga's second regional final, and its first since 1999, when the mid-major Bulldogs were a No. 10 seed that lost to top-seededUConn. Few was an assistantcoach on that squad and took over as head coach the following season.

Two years after losing in their second game as a No. 1 seed, the Zags missed out again in the finale for Kevin Pangos and Gary Bell Jr. The seniors, who each played at least 135 games for Gonzaga, were a combined 4-of-14 shooting for nine points.

Wesley, the other Gonzaga senior starter who had transferred fromUSCfor his final season, picked up a loose ball and made a layup while being foul. His free throw made it38-34 with 16:20 left.

Duke's go-ahead stretch included a tiebreaking 3-pointer by Matt Jones on an assist from Tyus Jones, who then had a nifty play to get Duke the ball back.

Przemek Karnowski had grabbed a defensive rebound before being stripped by Jones, who leaped in the air for the loose ball and dropped it straight down on Karnowski, laying out of bounds. Okafor then made a jumper.

"It was just a point in the game we had to make plays," Jones said. "Coach tells us to be confident."

Gonzaga: Domantas Sabonis had seven points in a 14-4 run that got the Bulldogs with a point before they didn't score in the last 3:50 of the half. The 6-foot-10 freshman then had a spurt of less than two minutes when he lost a pass out of bounds, missed a point-blank shot, drew a charge and then had two offensive fouls.

Duke: Plays Michigan State (27-11) on Saturday at the Final Four in Indianapolis.

ESPN Chalk's David Purdum and The Associated Press contributed to this report.

Duke Cruises Past Zags
Jeff Goodman breaks down Duke's 66-52 win over Gonzaga to advance to the Final Four.

Defense Key For Duke
Seth Greenberg, Jay Williams and Jay Bilas break down Duke's defensive performance against Gonzaga and Coach K returning to the Final Four for the 12th time. .

Duke Cruises Past Zags
Jeff Goodman breaks down Duke's 66-52 win over Gonzaga to advance to the Final Four.