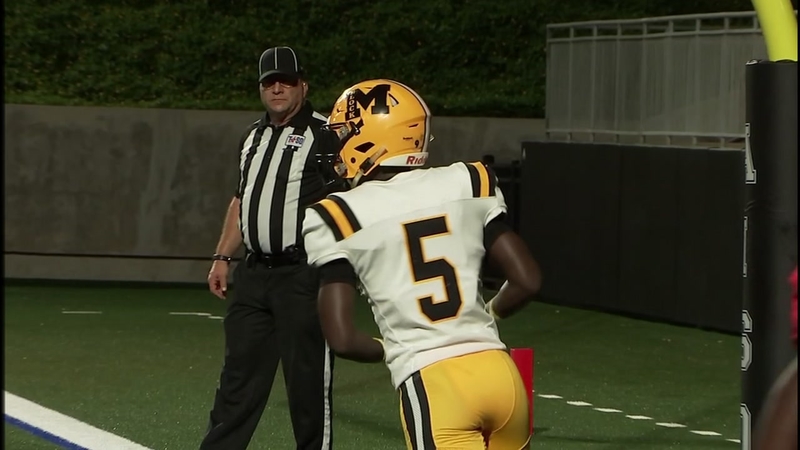 With the win, Marshall secured its first ever victory over Manvel, and remains undefeated for the season.

It was a bit of a slow start for both teams, but Manvel's high octane offense struck first after quarterback Josh Coltrin hit Jude Mayon for a 17-yard touchdown.

Marshall responded immediately with an 88-yard kickoff return by Devon Achane, tying the game at seven. Achane's kickoff return was the first of seven total touchdowns on the night for the 3-star running back.

A couple of early miscues hampered Manvel from blowing the game open. Marshall's defense managed to force a turnover on downs in the red zone, then a missed 30-yard field goal kept the game tied to end the first.

A costly fumble by Manvel on a trick play led to a Marshall recovery, which led to Achane's second touchdown of the game.

The FB Marshall Buffs defeated Manvel for the first time in school history.

Both teams exchanged touchdowns for the remainder of the game before heading into overtime tied at 44.

In the extra period, Manvel got off to the strong start by feeding Garrison Johnson, picking up his fourth touchdown of the game on a 5-yard run.

But with the disparity in school sizes causing Marshall to tire quicker, Coach Williams had his team go for the win.

Achane picked up his fifth rushing touchdown of the game on a 1-yard run to bring Marshall within a point.

Marshall then decided to go for the win on a 2-point conversion, which, of course, came on the back of Achane, keeping Marshall unscathed in the loss column this season.
Report a correction or typo
Related topics:
sportsmanvelalvin isdhigh school footballgame of the weekfriday night football
Copyright © 2021 KTRK-TV. All Rights Reserved.
TOP STORIES
Woman shoots and kills 'aggressive' man at River Oaks home
1 dead in Florida building collapse
Driver shot to death, crashes into Friendswood home
Father of missing woman terrified of potential outcome
Residents believe SUV in drive-by is connected to woman's murder
Woman struck and killed while walking on Gulf Freeway
Good Samaritan helps road rage shooting victim, HCSO says
Show More
Harris County searching for man who ditched dog in neighborhood
What should I know about the delta variant?
New videos show US Capitol riot from officers' point of view
Super steamy with a few downpours through Friday
Future of I-45 project uncertain as feds halt property buyouts
More TOP STORIES News