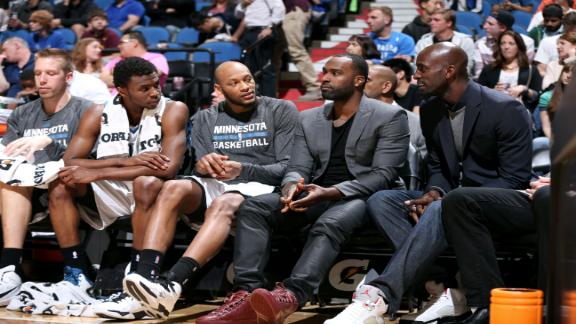 MINNEAPOLIS -- As president, coach and part owner of the Minnesota Timberwolves, Flip Saunders holds as much influence with the franchise as any coach in the NBA.

So it will largely be up to Saunders to decide how long he wants to hold the dual roles of coach and executive that so few of his brethren do in the league.

At his end-of-the-season news conference on Monday following an NBA-worst 16-66 season that was filled with injuries, disappointment and the development of a new young star, Saunders gave no indication that he will be relinquishing the coaching duties this summer.

"I'll coach until I feel we need to move in a different direction," Saunders said.

Last summer Saunders had conversations with several coaches, including Michigan State's Tom Izzo and Dave Joerger of the Memphis Grizzlies before selecting himself to succeed the retired Rick Adelman.

The Wolves entered the season with hopes of emerging as a surprise team in the rugged Western Conference, much the way the Phoenix Suns did the previous year. But injuries in November to Ricky Rubio, Nikola Pekovic and Kevin Martin quickly short-circuited that plan.

The short-handed team quickly sunk to the bottom of the league, but Wiggins established himself as the heavy favorite for rookie of the year while LaVine, Muhammad and Dieng all made big strides as the season went on.

Saunders said the development shown by the young players working with his staff, including assistants Sam Mitchell, Sidney Lowe, Ryan Saunders, David Adelman and Mike Penberthy, convinced him that "it was the right thing to do."

Saunders did not completely rule out hiring a different coach this summer. But as the season wound down he did say that he would like the opportunity to coach a fully healthy team and establish some continuity with an impressionable roster.

"You have to keep on developing those players," Saunders said. "When they get to their third and fourth years, usually that's kind of what they are and they can make huge jumps these first and second years."

The Timberwolves will have the best odds at the No. 1 overall draft pick in the lottery on May 19. They can fall no further than No. 4, leaving Saunders with confidence that they will add another impact player to team with Wiggins, the No. 1 overall pick last year who came to Minnesota in the trade that sent Kevin Love to Cleveland.

He said the two biggest priorities this summer will be to improve defensively and 3-point shooting. The Wolves were last in the league in points allowed, opponent field goal percentage, 3-pointers made and 3s attempted.

"The difficult thing you have right now with us is we're a combination," Saunders said. "We need defensive players, and we need 3-point shooting. Many times, those guys don't go hand-in-hand."

Rubio and Pekovic both had surgeries near the end of the season. Rubio's ankle will keep him from playing for the Spanish national team this summer, but won't stop him from being ready for training camp.

Pekovic's foot is much more problematic. He had surgery on the Achilles tendon to try to ease some of the chronic pain that has limited him the past two seasons, but his recovery is expected to take six months or more.

Saunders reiterated that he believes Kevin Garnett will play next season, and the Wolves can begin negotiating a new contract with the free agent-to-be on July 1.

"I don't want to get to the playoffs; I want to build a team that can win in the playoffs," Saunders said. "That's what we're trying to do. If you're going to try to do quick fixes just to get there, you might get there, but you might be back out of it soon. That's not what our goal is."