Fitzgerald: Father's thoughts his own 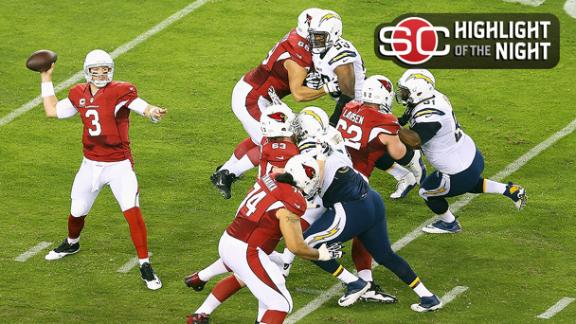 TEMPE, Ariz. -- Pro Bowl receiver Larry Fitzgerald, in response to a series of tweets from his father that criticized the Arizona Cardinals for targeting him only four times during Monday night's 18-17 win, says he doesn't share those sentiments.

Larry Fitzgerald Sr. set off the controversy a couple of hours after his son didn't get targeted in the first three quarters of a game for the first time in his 11-year career.

Fitzgerald finished with one catch for 22 yards.

Fitzgerald took to Twitter on Tuesday night in the wake of his father's tweets.

My fathers inflammatory comments dont reflect my feelings or mood. We're 1-0 & working tirelessly to be 2-0 this week thats my only concern.

It matched the third-lowest such rate of Fitzgerald's career.

The lack of use by the Cardinals of Fitzgerald on Monday night was enough to draw the ire of his father via Twitter.

As a child teaching my son football.I was a lineman.I told them every play I hit somebody.He said dad I want to be a receiver.I told him-

- Larry Fitzgerald Sr. (@FitzBeatSr) September 9, 2014Being a receiver you can work hard run all game and your dependent on the coach calling your number.And the quarterback getting you the ball

- Larry Fitzgerald Sr. (@FitzBeatSr) September 9, 2014The world saw on Monday Night Football the politics and business of football.If its been decided that you are not getting the ball just win

"That's interceptions waiting to happen," Arians said. "You have guys go out and then whatever coverage dictates, you get it. The coverage dictated he wasn't getting many.

"He was open a couple other times we threw it somewhere else, but I'm not interested in anybody's numbers other than the W's. Those days are long gone."

"You'd have to ask the quarterback," Arians said. "He's going out for a pass every time. I don't look at that."

On Monday night, Palmer said he looks for the best opportunity to get a completion, regardless of who's on the receiving end of his passes.

"More often than not, that's Larry, even when he's double-covered, but sometimes you just don't want to force balls in to him," Palmer said. "We did a good job when he was covered and getting pressed and having guys spy him, like the safety was a couple of times."

Palmer learned the hard way how tough it was to force passes to Fitzgerald last season. Of Palmer's 22 interceptions in 2013, seven were intended for Fitzgerald, according to ESPN Stats & Information.

"You want to get him involved, but it can bite you in the butt," Palmer said. "We weren't going to do that."

Cardinals' Late Rally Upends Chargers
Highlight Of The Night: Carson Palmer connected with rookie John Brown for a touchdown in the closing minutes of the fourth quarter and lifted Arizona to an 18-17 win over the San Diego Chargers.