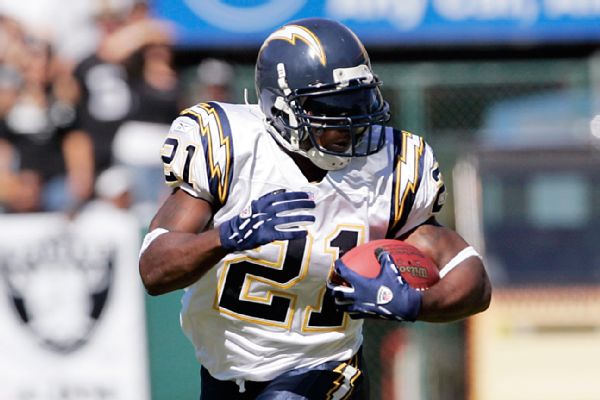 First-year eligibles LaDainian Tomlinson, Jason Taylor and Brian Dawkins are among 15 modern-era finalists for the Pro Football Hall of Fame.

Previously selected as a finalist by the veterans committee is former Seattle safety Kenny Easley.

The class of 2017 will be elected on Feb. 4, the day before the Super Bowl in Houston. Inductions will be Aug. 5 in Canton, Ohio.

Other than Tomlinson, Taylor and Dawkins, first-time finalists are Boselli, Bruce, Law, Mawae, Easley and Jones.

Coryell, an offensive mastermind with the Cardinals and Chargers, is in his 30th year of eligibility. Easley is in his 25th, while Jacoby, the left tackle on the Redskins offensive line known as the "Hogs," is in his 19th.

Dawkins spent 16 seasons in the NFL, 13 with Philadelphia, and was considered a prototype modern safety. He made four All-Pro teams and was the first player with a sack, interception, fumble recovery and touchdown catch in the same game (vs.Houstonin 2002).

Upon learning he was a finalist, Taylor tweeted that he was "honored" by the nod.

Among the other modern-era finalists, Andersen is the NFL's career scoring leader with 2,544 points, and has the most field goals (565) and games (382) while playing for five franchises. He made two all-decade teams (1980s and '90s).

Among those who did not advance to the final round are safety and current ESPN analyst Darren Woodson, receiver Hines Ward and coach Jimmy Johnson.