Fernando Verdasco upsets Rafael Nadal in first round in Melbourne 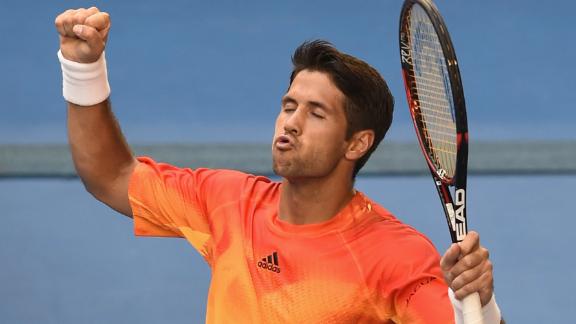 MELBOURNE -- Two days ago, Rafael Nadal told the media in Melbourne that he had an unlucky draw.

That was clearly understating it. With momentum shifting in seemingly every game of their 4-hour, 41-minute slugfest, Nadal finally succumbed to countryman Fernando Verdasco 7-6 (6), 4-6, 3-6, 7-6 (4), 6-2 on Tuesday in the opening round of the Australian Open.

Verdasco, who won the final six games of the match, ended the battle with a punishing 96 mph cross-court return winner, his 90th of the match.

For the second time in his career, Nadal suffered a first-round defeat in a Grand Slam. In 2013, 135th-ranked Steve Darcis shocked Nadal in straight sets at Wimbledon.

This was the worst possible start to the season for Nadal, who last season failed to reach a major final for the first time in a decade.

"The match is a tough loss for me, obviously," Nadal said. "Obviously is tough, especially because is not like last year that I arrived here playing bad and feeling myself not ready for it.

"This year was a completely different story. I have been playing and practicing great and working so much. You know, is tough when you work so much and arrives a very important event and you're going out too early."

But this battle was just as much about Verdasco's no-fear approach. Deep in the fifth set, he was still cracking groundstrokes well north of 100 mph from all areas of the court.

As the match wore on, Verdasco took control of the baseline, making Nadal scurry from one side of the court to the other. The final tally: Nadal ran 2.1 miles in the match, about a half-mile more than Verdasco. Nadal also hit 53 fewer winners than his opponent.

"I think I played unbelievable," Verdasco said in his on-court interview. "I just started hitting winners. I don't know how. I just closed my eyes, and everything was coming in."

Nadal found himself in a hole from the outset of the match, dropping the tiebreaker in the first set, which lasted well more than an hour.

The 14-time major winner now has dropped four of his past six five-set matches.

"The match is five sets," Nadal said. "There is not only last set. He was playing amazing in the last set. If you decide everything in one set, the opponent is ready to hit all the balls at 100 percent, then you are in trouble.

"He had a lot of success hitting all the balls full power in the fifth."

The match was predictably competitive despite the lopsided 14-2 head-to-head lead Nadal had in the rivalry. When the Aussie draw was released, experts targeted this as one of the potential upsets.

Nadal had played pedestrian tennis for a good part of 2015 and spoke candidly of his loss in confidence. As the season progressed, Nadal did compete better, reaching the Basel final and ATP World Tour semis, but at 29 years old, there were questions as to whether he would find his Grand Slam-winning form again.

While Nadal took control of the second and third sets, the fourth was a dogfight. Verdasco, playing fearless tennis in tight moments, outslugged Nadal in the second tiebreaker of the match. Verdasco finally cranked a 132 mph ace down the T to force the fifth.

The final frame was all Verdasco, who broke Nadal three times.

"Honestly, I work hard this preseason," Verdasco said. "It was a long one for me. I think I work pretty hard trying to be as best as possible for this season -- not only for this tournament, of course. And to be ready to play five-set matches against the best players in the world and be ready for that.

"And today I was feeling very good the whole match physically. Even the fifth set, like I said at the beginning, is the best set of all five that I played."

Seven years ago, they clashed in an unforgettable semifinal bout in Australia. In front of a rollicking crowd, Nadal outlasted Verdasco in 5 hours, 14 minutes, which at the time was the longest match in the tournament's history.

Nadal went on to win the title. With another championship, he would become the first player in the Open era to win all four majors multiple times.

Unlike Nadal, Andy Murray breezed into the second round Tuesday. The Scot beat 18-year-old Alexander Zverev 6-1, 6-2, 6-3.

Murray was admittedly wary of Zverev heading into the encounter. Two weeks ago, they met at the Hopman Cup, and while Murray won the match in straight sets, he described Zverev as a big guy who moves well and hits hard.

But defense ultimately decided this encounter. Murray committed only 20 errors, 22 fewer than his opponent, while breaking Zverev five times to move into the second round.

"Alex made it tough at the end," Murray said in his on-court interview. "We had long games and long rallies. He fought through to the end. The conditions were tough. It started to get hot when the clouds went away."

Murray owns Wimbledon and US Open championships, but he is arguably more comfortable playing on the courts at Melbourne Park.

Carrying the momentum of a Davis Cup title into this season, Murray is a four-time runner-up at the Aussie Open. Moreover, he has reached the semifinals here every year but once since 2009, yet has no winner's trophy to show for his efforts.

"There's no guarantees, but it's definitely possible because I've been so close in the past," Murray said of his prospects of finally winning. "There's no reason why I can't, but I'll need to play my best -- even my best ever -- if I want to do it."

As for Nadal, he had hoped his performance at the season-opening Qatar Open would be an indication of his current form. Nadal made the final before running into Novak Djokovic.

Now the question becomes whether Nadal can mentally recover in time for the French Open, a tournament he has owned.

Verdasco will play Israel's Dudi Sela in the second round.

Fourth-seededStan Wawrinka advanced to the second round at Melbourne Park whenDmitry Tursunovretired fromtheir first-round match with what appeared to be an upper leg injury.

Tursunov, who received treatment from trainers, called it quits after Wawrinka won the first two sets 7-6 (2), 6-3.

Playing in his 20th and final Australian Open, Hewitt won a tight opening tiebreaker and pulled away to beat countryman James Duckworth 7-6 (5), 6-2, 6-4 in front of a raucous Rod Laver Arena.

The encounter, which was standing room only, had a championship-match atmosphere. Even the media needed special passes to get onto center court.

After a perfectly executed lob winner on match point, Hewitt, a 2005 Aussie Open finalist, fell to the court and sprawled out, celebrating wildly as if he'd won the event.

In his on-court interview, Hewitt said he wasn't sure he was going to get any more chances to play here; that he will embrace every last moment.

"You don't fully know how you're going to react until you're out there on the match court," Hewitt said. "I think I had my game face on. Yeah, it might have been in the back of my mind a couple of times, but I was focused, ready, competitive, I guess, to get out there and hopefully get past the line."

On Thursday, Hewitt will take on No. 8 David Ferrer.

"I want six more [wins]," Hewitt said. "But, you know, just take it one match at a time. I do all the right things. I've prided myself my whole career on preparing as well as possible and doing all the 1 percenters to try and get the best result possible.

"I'll do that again. If it doesn't go my way the next match, then so be it. Everything is in my control. I'm going out there to give it my best shot."

No. 13 Milos Raonic followed up his win over Roger Federer in the final of the Brisbane International tuneup event with a 6-1, 6-4, 6-4 win over Lucas Pouille.

Joining him in the second round will be No. 18 Feliciano Lopez, No. 23 Gael Monfils and No. 32 Joao Sousa.

Verdasco rallies to stun Nadal
Fernando Verdasco defeats Rafael Nadal in five sets and advances to the second round at the Australian Open.