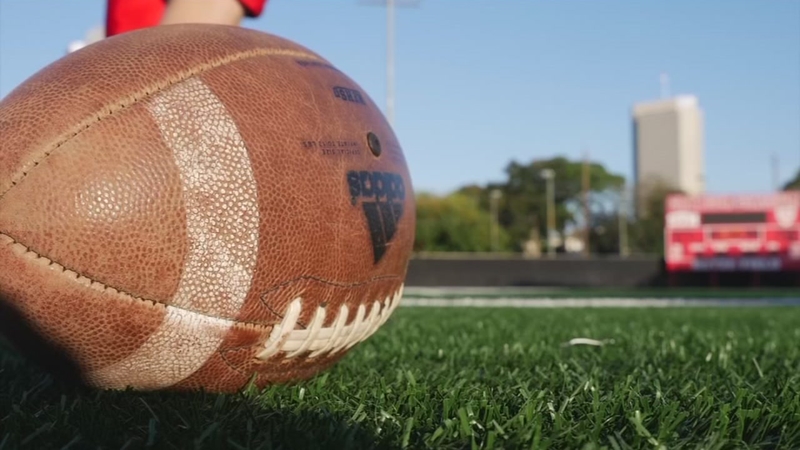 CROSBY, TX (KTRK) -- "Life changed. The world as I knew it was over," Scott Stephens said, sitting in his office near a football helmet signed by his son's high school teammates.

Cody was training hard for football at Tarleton State University when he died suddenly of cardiac arrest in May 2012.

"(Cody) was a football player because he was big, he loved it," said Stephens. "He put the helmet on and he was a mean son of a gun."

Now, Stephens is working to keep other families from knowing his heartache. He's hoping this will be the year "Cody's Law" will pass through the general assembly and get the governor's signature of approval.

The law would require Texas student athletes to have their hearts checked in their first and third year of high school sports, during their pre-participation physical exams.

Currently, districts do not require heart scans like EKGs, though some send literature home about the testing and the risk of sudden cardiac arrest.

"What we're doing for our kids today misses 95 percent of the heart issues that cause sudden cardiac arrest," said Stephens.

The Crosby father began pushing the proposal in Austin after Cody's death, but over the past three legislative sessions there are still opponents.

Some say they can't incur the cost to test their athletes. Others push back against the idea of another mandate in state law.

Stephens answered that opposition by introducing an opt-out option in his latest version of the bill.

As for guidance from the medical community as to whether all student athletes should have their hearts scanned, the answer isn't a simple "yes" or "no."

"It's not something that we just don't want to do," said Dr. John Breinholt, Chief of Pediatric Cardiology at Children's Memorial Hermann Hospital in the Texas Medical Center.

Unless there is a family history of heart problems Breinholt said, there isn't an immediate reason to mandate scans for student athletes. He also worries more testing could mean more false positives resulting in further unnecessary testing and less playing time for student athletes.

"We want to make sure we do it in a very measured way to ensure that we are helping, not creating more work, taking kids off the field," Breinholt said.

However, for Kashay Jenkins, she said had she not gotten her son Davion a heart scan, she would have never known he was potentially a practice or game away from cardiac arrest.

"The doctor told me that day that normally they find these in autopsies because it just goes without any symptoms," Jenkin's said of Davion's abnormal right coronary artery.

The defect was caught after Jenkins heard about Scott Stephens' push for EKG screenings.

After open heart surgery in December 2016, Davion was cleared to go back to track and football practices in mid-April.

As Davion heads back out onto the field, lawmakers continue to meet on Scott Stephens' proposal. Currently, the bill is awaiting to be scheduled for a date to be heard on the House floor in Austin.

In the meantime, Stephens continues to run the "Go Big or Go Home Foundation," a memorial to Cody, that works with the organization Who We Play For to offer free heart screenings to more than 40,000 student athletes across the state.

"It takes about five minutes. They give them an EKG, send them back to class. It works wonderfully," said Stephens.

He says about two percent of the students that get scanned actually have a problem, but if it saves a life, it's worth it.

"I can tell you the cost of not doing the test and I've got a beautiful headstone down in Highlands, Texas, that will tell you, get your kid tested," said Stephens.