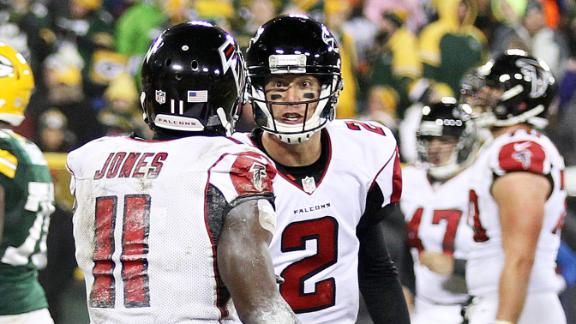 In the process of saying his team can't allow Matt Ryan to throw for 500 yards in the game, Lewis went on to tell the media, "We're definitely gonna give them their funeral."

The 6-8 Saints, who lead the division, can eliminate the 5-9 Falcons from playoff contention with a win.

White was asked if Lewis' trash talk bothered him.

"Nope," White said. "May we rest in peace until Sunday."

"It is what it is because you play the game on the field," Douglas said. "I've never seen anybody play the game talking. All we've got to do is play the type of football we have to play, and the rest will take care of itself.

"Lewis is a great player. He's a competitor. But it boils down to New Orleans vs. Atlanta. We don't like them, and they don't like us. You leave it all out there on Sunday. That's when I'm going to play the game: on Sunday. I can't play the game on Wednesday."

Ryan offered his take on the subject.

"It doesn't matter," the quarterback said. "At the end of the day, what matters is what you do between 1-4 p.m. on Sunday afternoon. And if you're worrying about any other stuff that's going on at this point, you're wasting your time. Let's focus on what's important."

"I would never allow trash talk to bother me," he said. "That's just my upbringing. It was something I didn't participate in and something I definitely don't particularly pay attention to.

"If you're able to talk trash and back it up, kudos to you. But everyone can't do that. Ultimately, it's a team sport. He can have a dominating game, but it still doesn't mean anything. It's about what he and his teammates do collectively."

The Falcons won the season opener between the teams 37-34 in overtime at the Georgia Dome. However, the Saints have won three straight over the Falcons in New Orleans and seven of the last eight inside the Superdome. The Falcons lead the all-time series 48-43.