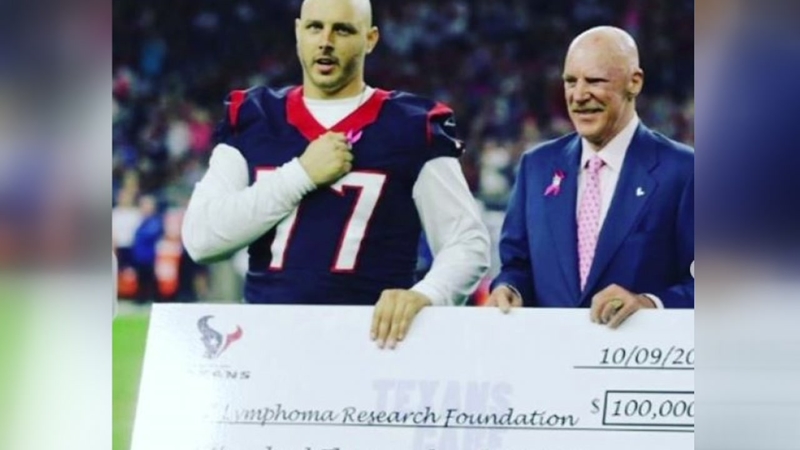 HOUSTON, Texas (KTRK) -- Former Houston Texans player David Quessenberry posted to Instagram Monday to thank the late Bob McNair for his support when he discovered he had an aggressive form of lymphoma four years ago.

Quessenberry, who was released in the offseason by Houston and later signed to the Tennessee Titans practice squad, says his interactions with McNair were brief and he didn't even know the Texans owner knew his name, until he went into his second year of playing for the franchise.

"I was diagnosed on June 6th. The doctors explained that my type of lymphoma was very aggressive and we must act quickly," he said. "The next day, I was sitting in an MD Anderson Hospital bed beginning chemo. To say I was terrified about my future would be an understatement. I had no idea what kinda fight I was about to start what my future in the NFL was."

While thinking about how soon his football career might be over, Quessenberry said his hospital door opened.

"It's Mr. McNair. He had just finished one of his treatments and came by to see me," he said. "He came to check up on me and see how I was doing and to pass along a few tips he had picked up during his fight."

While Quessenberry appreciated the visit, what McNair said next was something he will always remember.

"Before he left, he leaned in and I will never forget what he said next. He said, 'David, I have been praying for you and praying on your current situation. I know you are gonna beat this and I want you to know that I think of you as part of the Texans family, as a part of my family and that we and I are gonna have your back through this fight all the way till you make it back to NRG stadium and run out of that tunnel wearing your number 77,'" he wrote.

"I wouldn't be where I am today without his compassion. I am forever grateful," he said.

One of the NFL's most influential owners, McNair had battled both leukemia and squamous cell carcinoma in recent years. He is survived by his wife, sons Cal and Cary, daughters Ruth and Melissa, 15 grandchildren and two great-grandsons, the team said. 'They're killing us': Residents say of railyard contaminants