Everything that happened in the NBA playoffs on Wednesday 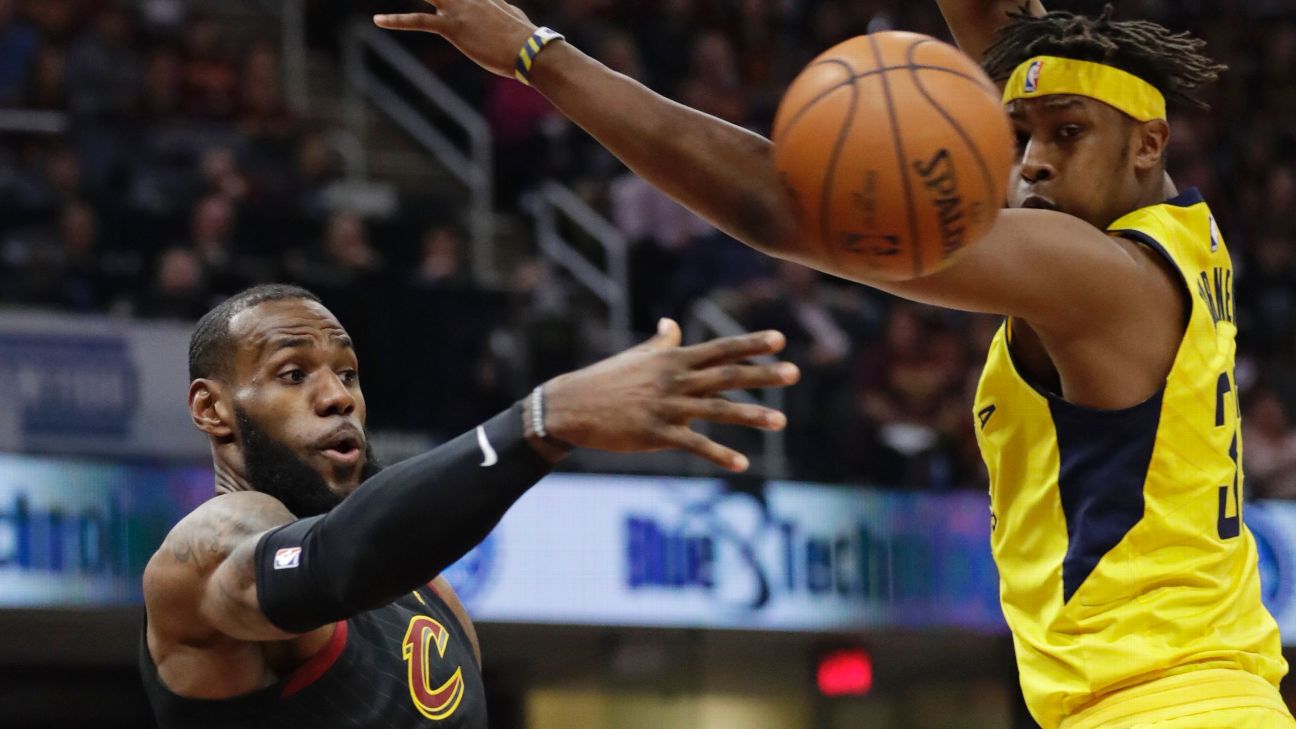 For the first time since May 3, 2013, the NBA playoffs featured four games on a single weeknight. If you missed a single second of the action, we have you covered with all the stars, shots, comebacks and clinchings you need to know.

LeBron James delivers at the buzzer

James is now 2-3 in the playoffs on potential go-ahead 3-pointers in the final five seconds. He's 1-20 on those same shots in the regular season.

Sabonis ties it up late

Domantas Sabonis scored a game-high 22 points for the Pacers, and his jumper with 33.6 seconds left tied the score at 95-95. The Pacers quickly got the ball back after a LeBron James turnover, but James redeemed himself on the other end with one of his trademark chasedown blocks.

LeBron doing it himself

Another slow start for Cleveland

Game 6 will be Friday night in Indianapolis (8 p.m. ET on ESPN). The Cavaliers are 8-1 all time when leading a series 3-2, with the only loss coming in the 2006 conference semifinals against the Pistons -- James' second postseason series. Including his time in Miami, James' teams are 9-1 when up 3-2 in a series. The Pacers, meanwhile, are just 1-12 in a series when trailing 3-2, with the only win coming in the 2014 first round against the Hawks.

Brian Windhorst writes after another classic LeBron James playoff performance: "Over the years James has learned so many different ways to control games. He has improved his jump shot, he has learned to play with his back to the basket and he has tried to teach teammates to be ready for him to distribute so he can play that role. But this was back-to-brute basics." Read full column

From down 25 to tied in a heartbeat

During OKC's 32-7 run to end the third quarter, Russell Westbrook was 6-for-7 from the field, 4-for-5 from beyond the arc, and a perfect 4-for-4 from the free throw line for 20 points. Paul George scored the other 12 for the Thunder in that span.

The Ingles and Crowder Show

Utah wings Joe Ingles and Jae Crowder nearly outscored the Thunder by themselves in the first quarter, putting up 24 points and going a combined 7-for-9 from beyond the arc.

Enes Kanter, who used to play for both teams in this series, is still beloved in Oklahoma City and was in the building for Game 5 to support Steven Adams.

The series shifts back to Utah for Game 6 on Friday night (10:30 p.m. ET on ESPN). The Jazz have never lost a series in which they had a 3-1 lead and the Thunder have never made a comeback from down 3-1. Eleven teams have come back from a 3-1 deficit to win a best-of-seven series, most recently the Cavaliers in the 2016 Finals.

Russell Westbrook was the spark that lit an improbable fire, writes Royce Young: "Some other stuff happened, a George layup, a Westbrook 3, an awesome Donovan Mitchell dunk, but the comeback was finally complete when Westbrook stopped and popped to splash a 3 with 35.9 seconds left in the third to tie the score 78-78. After the shot dropped, Westbrook's unleashed a megawatt snarl that could power a fusion generator." Read full column

The Beard with the hammer

No Butler for Timberwolves

Rockets back at it in third quarter

Waiting for liftoff from Rockets' backcourt

Wolves switch up the rotation

The Rockets advanced to the second round, where they'll await the winner of the Jazz-Thunder series. Houston beat OKC in the first round a year ago, and last faced Utah in the playoffs in 2008, a first-round series won by the Jazz in six games. The Timberwolves still have advanced beyond the first round only once in franchise history. They hold the 20th pick in June's draft, acquired from the Jazz in last summer's Ricky Rubio trade.

Clint Capela ran Karl-Anthony Towns and the Timberwolves out of the playoffs, writes Tim MacMahon: "The centers' raw numbers in the series were pretty similar. Towns averaged 15.2 points and 13.4 rebounds per game, compared to 15.8 points and 14.2 rebounds for Capela. But their impact wasn't comparable, as Capela's relentless energy played a key role in the Houston Rockets finishing off the Timberwolves in five games, a stark contrast to Towns' often passive play." Read full column

Raptors on the verge of advancing

DeMar DeRozan finished with 32 points and Delon Wright scored 11 of his 18 points in the fourth quarter to help the Raptors beat the Wizards and move to within a win of the second round.

Everything going Wright for Toronto

The Raptors regained the lead midway through the fourth quarter, then Delon Wright -- who averaged just 6.5 points in the two losses in Washington -- went on a personal 7-0 run, starting with a deep 3-pointer and ending with free throws to extend the Raptors' lead to eight with two minutes to play.

And, of course, his feud with Drake continues.

DeMar DeRozan scored 10 points in the third quarter, giving him 30 for the game. Vince Carter, who set a Raptors postseason record with 50 points against the 76ers in 2001, is the only Toronto player to reach the 40-point mark in the playoffs.

DeMar DeRozan leads all scorers with 20 points, more than halfway to his postseason career high of 37 (which he matched earlier in this series). John Wall is flirting with a triple-double, putting up 12 points, 5 rebounds and 4 assists in the first half.

DeMar DeRozan scored 13 points in the first quarter, but the rest of the Raptors combined for just 10 on 5-for-12 shooting, allowing the Wizards to take a one-point lead heading into the second quarter. DeRozan has scored at least 35 points in two of the past three games.

Game 6 will be Friday in Washington (7 p.m. ET on ESPNEWS and NBA TV). The Raptors are 3-1 all time in a series when leading 3-2. The Wizards do have history coming back from a 3-2 deficit, having done so three times, but the last of those victories came in 1979.

After Delon Wright came up big in the fourth quarter, Kevin Arnovitz writes of the unlikely star: "The Raptors have spent a full season refashioning their offense into a system more predicated on movement and playmaking. But this new enterprise works only if those being trusted, such as Wright and others in the supporting cast, reciprocate that trust by maximizing opportunities." Read full column

Cavs take series lead after LeBron's clutch shot
The Cavaliers outscore the Pacers by 15 in the 3rd quarter and LeBron comes up clutch with the game-winning block and shot in Cleveland's 98-95 win.

LeBron takes responsibility for Cavs' offensive balance
LeBron James says that many of his teammates can shoot 3s, but he balances that by pressuring the defense in the paint.

DeRozan spins by Wall and converts tough layup
DeMar DeRozan loses John Wall with a spin move, then absorbs contact from Marcin Gortat and still knocks down the layup.

Harden propels Rockets to Game 4 win
Behind James Harden's 34 points and the team posting 50 in the third quarter, the Rockets take a commanding 3-1 series lead.

Nichols: Don't be surprised by Jazz
Rachel Nichols is impressed by Utah's ability to zone in on getting the job done as a team through four games against Oklahoma City. 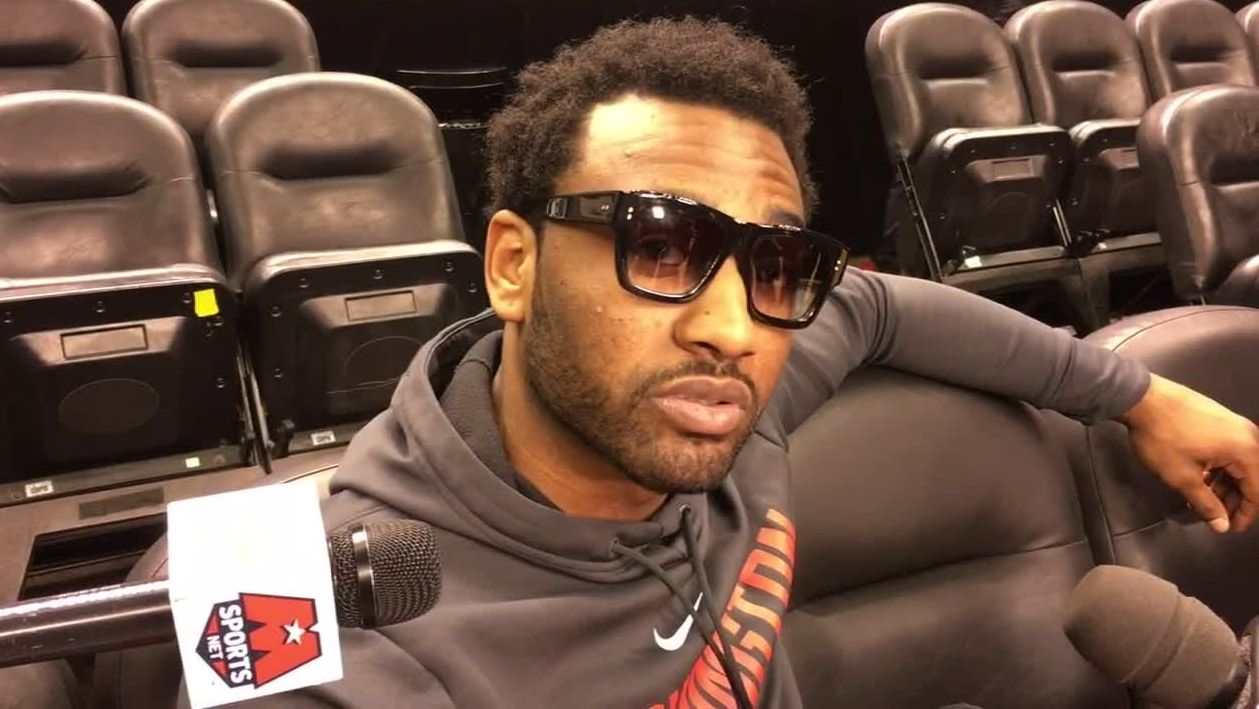 Drake fired up after DeRozan's 3 rattles in
DeMar DeRozan's triple hits the front rim, then the back rim before going through the hoop which excites Drake.

Drake, Wall talk in between plays
Drake and John Wall go back and forth with some playful banter. 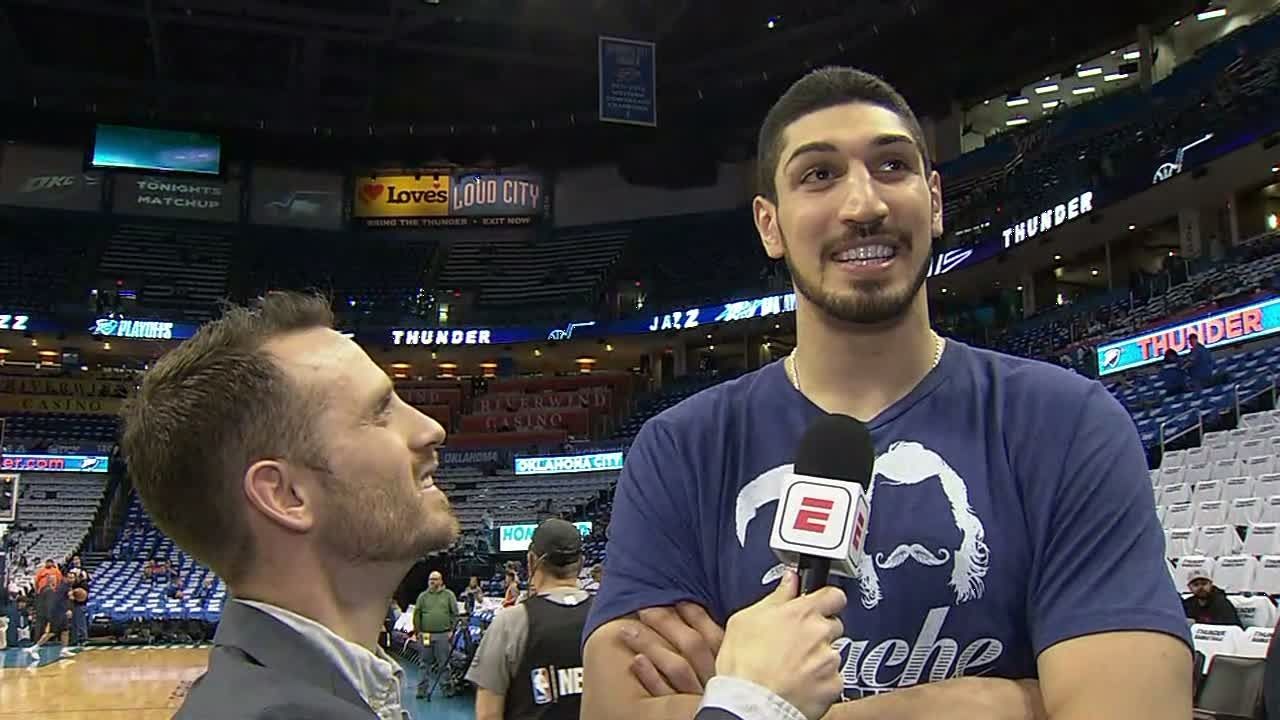 Kanter supporting brothers at Thunder game
Enes Kanter explains he came to Game 5 between the Thunder and the Jazz because he wants to support his former teammates and to be a part of the playoff atmosphere.

DeRozan, Raptors take 3-2 lead
DeMar DeRozan scores 20 of his 32 points in the first half, and the Raptors take down the Wizards 108-98.

Ingles shoves George to floor, drains 3-pointer
Joe Ingles gives a light shove to Paul George to create space and proceeds to knock down a 3-pointer.

Ingles throws one down in transition
After a Thunder turnover, Jae Crowder leaves the ball for Joe Ingles, who finishes with a dunk.

George spins his way for layup
Paul George drives to the basket, uses a spin move and drains a layup.

Russ' long 3 ties game
Trailing by 25 points in the third quarter, the Thunder come all the way back and tie the game at 78-78 on Russell Westbrook's 3-pointer.

LeBron calls game on Pacers
With 3.0 seconds left in the game, LeBron James drains a buzzer-beater to beat the Pacers 98-95 and take a 3-2 series lead.

LeBron steals and scores
LeBron James intercepts the Pacers' pass and takes it all the way down the court for a layup.

Harden loves how his hands smell after big slam
James Harden explodes to the rim and throws down an emphatic one-handed flush.