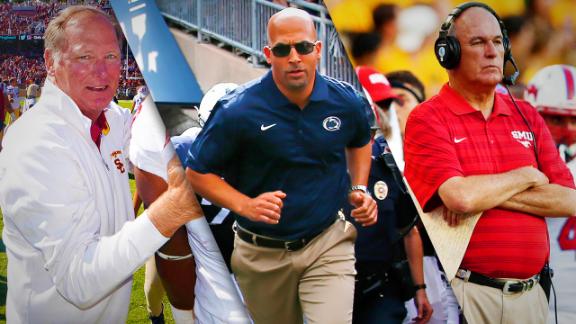 FormerSMUrunning back and Pro Football Hall of Famer Eric Dickerson didn't mince words when it came tohis alma mater's issues on the football field: either fix it or get rid of it.

"I talked to four former players yesterday, and we all said if they don't want to do anything, just kill the program," Dickerson told 105.3 KRLD-FM in Dallas on Tuesday. "Just stick to academics and basketball and kill that program.

"It's so frustrating for us to watch SMU become nothing but a laughingstock or almost nonexistent. It's almost like it doesn't exist."

Coach June Jones abruptly resigned Monday just two games into the season -- during which the Mustangs were outscored a combined 88-6 -- because of unspecified personal issues. Hewas 36-43 at SMU after nine seasons at Hawaii.

Dickerson, who finished third in the 1982 Heisman Trophy balloting behind behind Herschel Walker and John Elway, has been passionate about the program's direction since he and other former players were welcomed back after years of feeling ostracized in the wake of the "death penalty" doled out by the NCAA in 1986.

"It's a tough question," Dickerson said Tuesday about the Mustangs' future. "The main thing is getting the help there, and I think June has been frustrated the last couple of years with not getting the help that he needed from upper management in the university."

If SMU needs an example to model itself after, Dickerson suggests looking across town at TCU, which has grown into a top program playing for aPower 5 conference.

"I look at TCU, and TCU is a great school. I look at TCU and SMU. ... TCU has got it," Dickerson told the radio station. "They have fans coming to the games and made the total 360, and we're just still sitting on our hands like we don't get it.

"We're still sitting there talking about the death penalty that happened 30 years ago. It's time to get over that."