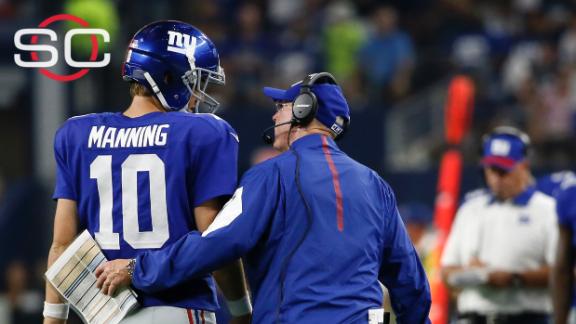 New York Giants quarterback Eli Manning admitted taking strategic matters into his own hands late in Sunday night's season-opening loss to the Cowboys, confirming that he told running back Rashad Jennings not to score if he got close to the goal line. The purpose of the move was to run more time off the clock and deprive Dallas a chance at a comeback.

It did not work. Manning ended up throwing a clock-stopping incomplete pass on third down, the Giants settled for a field goal, and the Cowboys marched down the field to score the winning touchdown with seven seconds left.

What led up to that sequence was bizarre. Manning said he lost track of the number of timeouts the Cowboys had left and told Jennings to stay out of the end zone on consecutive plays in case Dallas decided to let him score.

"I thought they had one timeout left and they might let us score to get the ball back," Manning said on a conference call Monday. "So I told Rashad, 'Go down at the 1-inch line and don't score.'

"This did not come from the sideline. It was me, and I was wrong. I cannot be the one in that situation to inform a back. That's not my decision, in that scenario. I made a mistake."

Manning spoke to Jennings about the situation after the game. He also spoke to the team Monday to take responsibility for those two plays and the third-down play on which he threw the ball out of the back of the end zone when he should have taken a sack to keep the clock running.

"I'm not mad," Jennings said. "We're doing this as a team, and we thought it was best for us not to score at that point. Of course I wanted to, but that's just the football player in you."

Jennings said this was the first time he had been given such an order since he was in college, and that the reason back then was that his team had a lead and a chance to run out the clock. That wasn't the case Sunday, but it still was odd to ask Jennings not to score.

But Dallas had not been charged with a timeout there. The clock had stopped because the Cowboys were called for an offside penalty on Beckham's catch. Even though the Giants declined the penalty, the rules say the clock stops after such a penalty in the final five minutes of the fourth quarter.

"I thought they only had one timeout after the play to Odell," Manning said. "I guess after a declined penalty, the clock stopped."

The NFL said the clock used to run on the snap after all penalty calls, but that in 1985 the rules were changed to shorten game time, allowing the clock to run following certain penalty calls before the five-minute mark of the fourth quarter.

The league kept the traditional timing rules in place for that critical end-of-game period, as well as for the final two minutes of the first half, because, NFL spokesman Michael Signora said Monday, those are "particularly exciting parts of games" and "there was no desire to reduce the number of plays that might occur in those time segments."

When Jennings was told not to score on second down, the Giants believed they would be able to churn 40 seconds off the clock and run their third-down play with a little more than a minute to go. When the Cowboys stopped the clock with 1:43 to go after the second-down run, the Giants were surprised.

As for the runs themselves, Jennings insists he could have scored on either one.

"On one of them it would've been a grind," Jennings said. "But on the other, I cut the wrong way [on purpose] and found somewhere soft to fall."

Giants coach Tom Coughlin said his only goal in that situation was to come away up 10 points and that he was disappointed when they had to settle for a six-point lead. He also took responsibility, in conversations with his players and with the media, for the third-down play call he said should have been a run and not a pass.

While he acknowledged that Manning was the one who told Jennings not to score, Coughlin said it didn't affect his opinion of Manning, with whom he has won two Super Bowls.

"It's never happened before," Coughlin said. "I completely trust Eli, always have. He's completely into the game and aware of all the circumstances. So to be honest with you, nothing like that has ever happened. And his mind was in the right place here. He just didn't have his facts right." 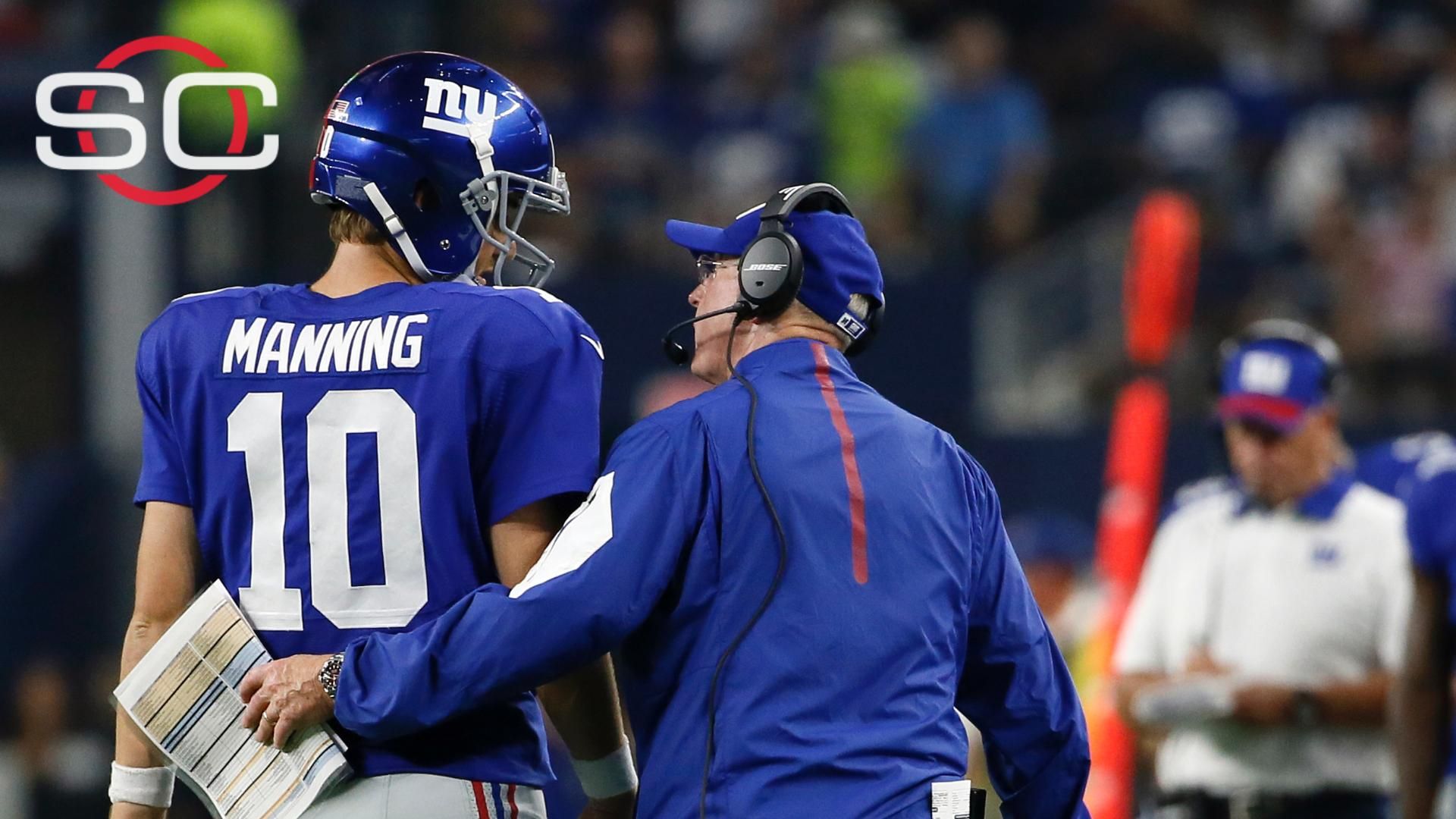 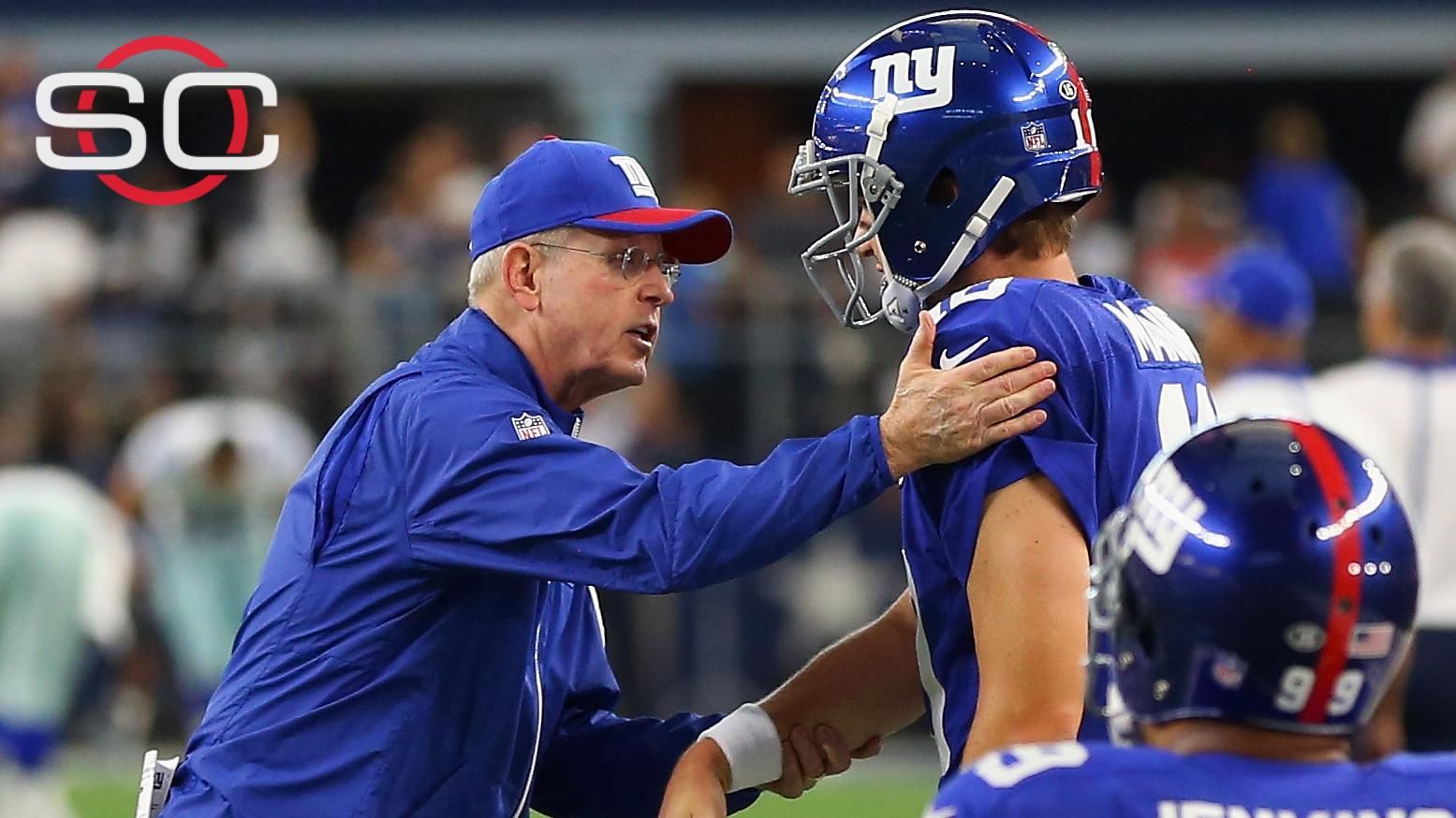 Coughlin: 'I completely trust Eli'
Giants coach Tom Coughlin says he still trusts QB Eli Manning after Manning lost track of Dallas' timeouts and told RB Rashad Jennings not to score if he got close to the goal line. 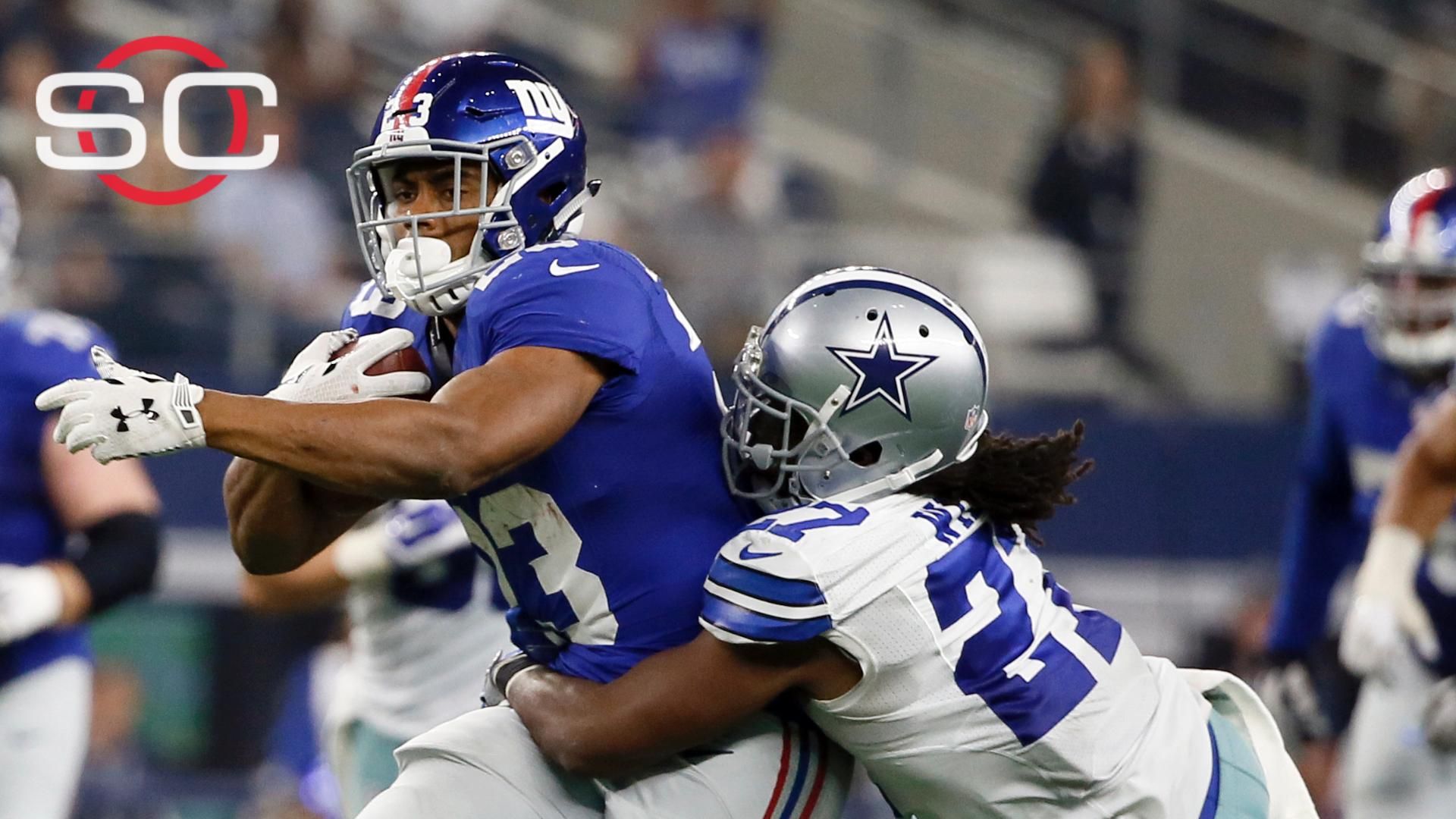 Jennings told by Manning not to score at end of game
ESPN Giants reporter Dan Graziano discusses RB Rashad Jennings' comments that QB Eli Manning told him not to score if he got close to the goal line in order to take more time off the clock in the Giants eventual 28-27 loss to the Cowboys. 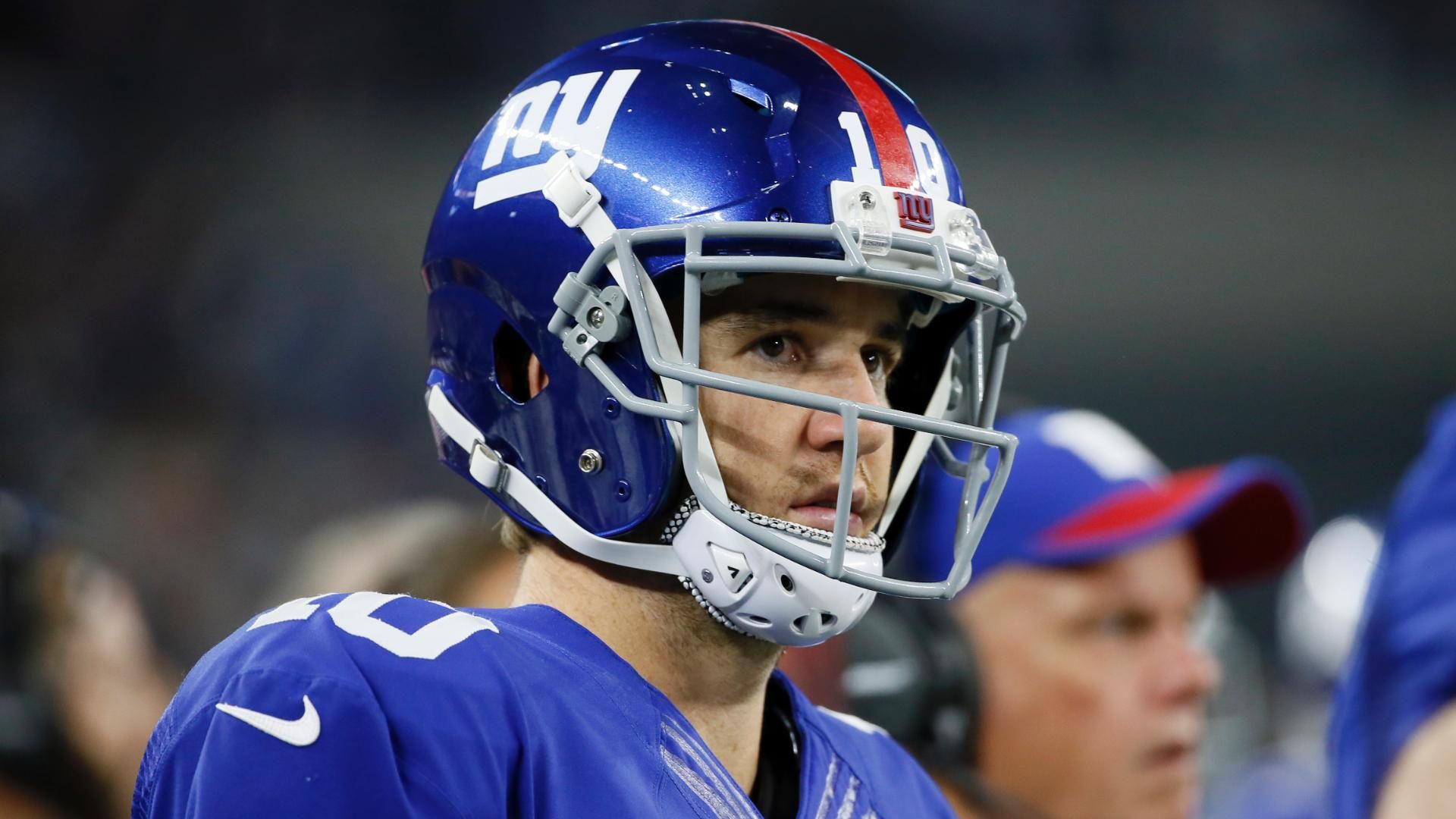 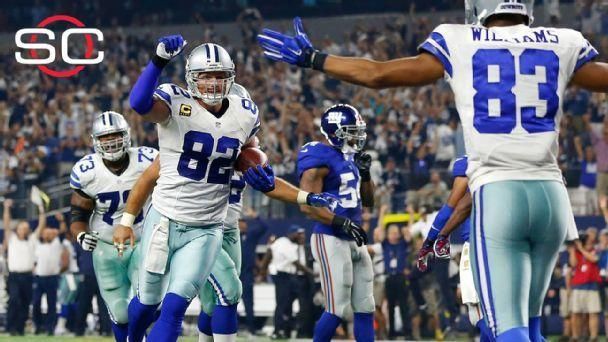 Cowboys stun Giants
After the Giants decide not to run the ball late in the fourth quarter on third down, the Cowboys capitalize with Tony Romo finding Jason Witten for an 11-yard touchdown, and Dallas shocks New York 27-26.