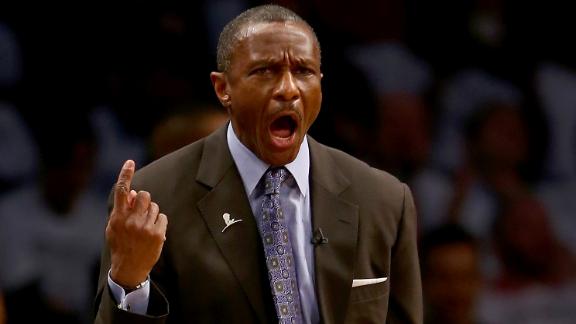 The Toronto Raptors have quickly followed up a 48-win season by reaching terms with coach Dwane Casey on a new three-year contract, the team announced Tuesday.

Casey's Raptors were eliminated from the playoffs Sunday with a 104-103 Game 7 loss at home to the Brooklyn Nets.

General manager Masai Ujiri says in a statement Tuesday that Casey has "done an excellent job both on and off the court."

Casey began the year on most coaching hot seat lists because he was inherited by new Raptors GM Ujiri. But Toronto unexpectedly took off in January after the trade of Rudy Gay and wound up winning the Atlantic Division with the highest single-season win total in franchise history, with Casey credited for his role in getting the best out of both DeMar DeRozan and free agent-to-be Kyle Lowry.

Both guards had career years; DeRozan made the Eastern Conference All-Star squad and Lowry is widely regarded as the biggest All-Star snub in the East.