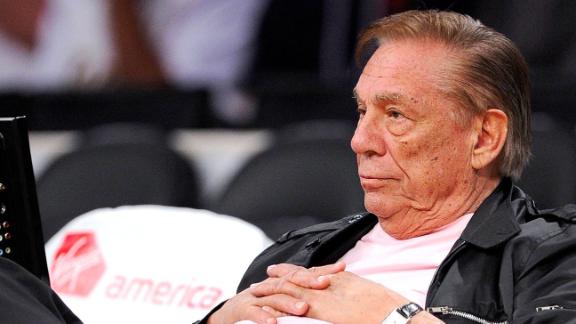 LOS ANGELES -- The trial to decide the fate of the record-breaking $2 billion sale of the Los Angeles Clippers began Monday afternoon with the lead attorney for Shelly Sterling calling Donald Sterling as a witness and suggesting a bench warrant be issued for the owner who has been banned for life by the NBA.

Donald Sterling was not present when the trial finally began after a morning of delays while a federal court judge rejected a motion to move the case from California probate court.

Sterling's attorneys promised he would be present when court reconvened Tuesday afternoon, explaining his absence as pragmatic as the 80-year-old owner did not expect the trial to commence Monday while jurisdiction was sorted out.

"He was not here today because our expectation was that it would take some time to get a decision from the federal court and we didn't want to have him come down here and put him on in this environment," attorney Bobby Samini said. "I don't think it was an unreasonable position to take."

Sterling's attorneys alleged that his federal privacy rights were violated when his medical records were disclosed to the public. Judge George Wu denied the motion, writing that "to the extent that [Sterling's] medical records are relevant to the probate hearings, the probate court is more than capable of evaluating them and rendering a decision."

Pierce O'Donnell, an attorney for Sterling's wife, called Monday's session "a singular victory for Shelly and for Steve Ballmer and for going forward with the sale of the Clippers for the record price of $2 billion."

Ballmer's lawyer, Adam Streisand, said that he is in "constant contact with Mr. Ballmer and he's very pleased with how things are going."

Gary Ruttenberg, another attorney for Donald Sterling, cautioned that this was just the first day and that the judge's rulings might not become a factor in the final decision as to whether Shelly Sterling has the authority to complete the sale to Ballmer.

Immediately after Wu's ruling, the trial began in probate court and O'Donnell called Donald Sterling as a witness, saying that his side had subpoenaed him through one of his lawyers, Max Blecher. O'Donnell then suggested that a bench warrant could be issued in what Ruttenberg later called "as a ploy just to show he wasn't there."

Judge Michael Levanas did not immediately rule on that request, and O'Donnell moved on to his second witness, Dr. Meril Sue Platzer, who was one of the neurologists who examined Donald Sterling and deemed him mentally incapacitated and unable to conduct his legal and business affairs.

Platzer testified that she ordered PET and CT scans for Sterling at Cedar's Sinai Hospital in Los Angeles before her examination of Sterling on May 16 at his Beverly Hills residence. The examination lasted for approximately two hours, she said.

Ruttenberg repeatedly objected to Platzer's testimony as a violation of his client's right to privacy. He argued that since Sterling was not aware the examinations were to evaluate his mental competency and could later be used to exclude him from the family trust which owned the Clippers, the provisions of the trust in which each of the Sterlings waived their right to privacy (under federal HIPAA laws) if they were deemed incapable of handling their legal or business affairs were not applicable.

"He was totally unaware that the examination was anything other than his wife's concern for his health. I think Dr. Platzer confirmed that," Ruttenberg said. "She was there to examine him from a neurological standpoint, to determine what his mental status was. She had no knowledge of the existence of the trust. She had no knowledge of the removal provision. We don't think that was brought to her attention until about a week after the exam. We have a concern as to the manner in which this was conducted, between Plan A and Plan B ... the secret Plan B."

Levanas overruled Ruttenberg's objections and asked if there was a way to avoid him objecting on the same grounds throughout the trial. Ruttenberg laughed and said he planned to object every time Sterling's medical information was discussed, which he did throughout Platzer's testimony.

Platzer was also asked by O'Donnell whether she had social interaction with Shelly and Donald Sterling after the exam, as had been alleged in previous court filings. His attorneys contend that social interaction, at the Polo Lounge inside the Beverly Hills Hotel, compromised the findings of her exam.

Dr. Platzer testified she and Shelly Sterling had dinner at the Polo Lounge, which is across the street from the Sterlings' home, after the exam. She said she drank about a half of a glass of wine during dinner, and that Donald Sterling, Samini (who hadn't yet been retained as his attorney) and a friend of Donald's named Lawrence later joined them, but that Shelly had "discouraged them" from sitting at their table.

Platzer said she and Samini spoke about their personal lives, but denied she had gotten emotional at any point during dinner, as Sterling's attorneys alleged in court papers.

She flatly denied that anything said or done during dinner impacted her evaluation of Donald Sterling, saying "absolutely not" when pressed on that issue by O'Donnell.

The judge recessed the trial during Platzer's testimony. She will be cross-examined Tuesday by Samini.

At some point in the afternoon, Donald Sterling is expected to be called as a witness, and he is to be questioned by Bert Fields, a legendary entertainment attorney.

"We're very anxious to get Mr. Sterling here because he's the guy that keeps doing everything he can to keep his family from getting the $2 billion they are entitled to," Fields said. "Why? Just because of his ego.

"He's accusing his wife of fraud. Nonsense. There's no fraud here. He knows better and we'll be able to show that."

Judge Denies Sterling's Bid To Move Trial
ESPN.com senior writer Ramona Shelburne discusses the decision to deny Donald Sterling's motron to move his dispute with his wife, Shelly Sterling, over the sale of the Los Angeles Clippers from probate court to federal court.