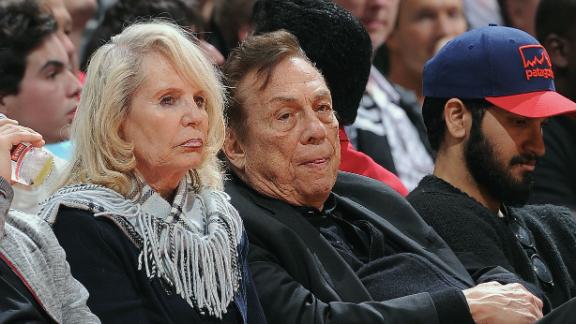 LOS ANGELES -- Shelly Sterling's emergency motion to protect herself, her lawyers and two doctors who received hostile voice mails from her estranged husband, Donald Sterling, was denied Thursday by Judge Michael Levanas without prejudice as he did not feel the voice mails rose to a "level of great and irreparable injury."

The judge also told both sides to "tone down the pre-trial communication."

In the voice mail recordings, which were introduced into court, Donald Sterling allegedly threatened the medical licenses, jobs and livelihoods of two doctors who declared him mentally incompetent last month. Those declarations empowered Shelly Sterling to sell the Los Angeles Clippers to Steve Ballmer for $2 billion without the consent of her husband.

In a voice mail to Dr. Meril Sue Platzer on June 9, Sterling calls her "a horrible woman," and "nothing but a fraud and a liar and a cheat." He said that he is going to see that she loses her license and says he will sue her for a "large sum."

In a voice mail to Dr. James Edward Spar, also on June 9, Sterling says, "I'll show you what I think of you when I see you in court." He asserts, in a profanity-laced tirade, that he will get Spar fired from his job at UCLA.

"I'm gonna get you fired from UCLA because you're nothing but a tramp. How dare you let someone use you that way?" Sterling said. "You know, you rely on doctors. You think that they'll be above it all. But obviously you're not. You'll sell yourself for nothing. How dare you? How dare you give my records to a lawyer for the purposes of using it against me?"

Sterling also is said to have threatened Shelly Sterling's attorney Pierce O'Donnell in a call on June 9. According to O'Donnell's court statement, Sterling said he was going to "take you out, O'Donnell" and "sue everybody."

In the call with Sterling on June 9, O'Donnell said he asked Sterling why he would not consent to a sale of the team, when he and his lawyers had stated June 4 that he would. O'Donnell said Sterling responded, "Can't a guy change his mind?"

Donald Sterling's lawyer Max Blecher said Thursday of his client, "He's got a short fuse," but "that doesn't mean you're incapacitated or nuts."

Blecher said Sterling was simply angry over the situation and did not mean to threaten or intimidate anyone.

"Personally, I think it's a ploy to put us in a bad light," Blecher said. "It's all over. Nobody is in any danger."

Sterling's other lawyer, Bobby Samini, added: "I don't think they're threatening. I think they are a response to having your medical records put out on the Internet. You tell me, if that happened to you, would you pick up the phone and leave a really nice voice mail for your doctor? I'm sure you would not do that."

The court filing Thursday was a response to what Shelly Sterling and her attorneys characterize as an attempt by Donald Sterling and his lawyers to threaten, intimidate and harass witnesses who will be called in the probate court hearing July 7-10.

That hearing was scheduled after an emergency petition to the court last week by Shelly Sterling to evaluate the actions she took to sell the Clippers to Ballmer. Shelly Sterling has argued for an expeditious court ruling on her authority to sell the Clippers because the sale needs to close no later than Sept. 15 or the NBA will resume termination proceedings against Donald Sterling for racist remarks he made to former assistant V. Stiviano, which were published by TMZ.

Shelly Sterling became sole trustee of the Sterling Family Trust, which owns the Clippers, when two neurologists evaluated Donald Sterling and determined he had a form of dementia consistent with Alzheimer's disease that incapacitated him from making decisions about his business and legal affairs.

Donald Sterling has since challenged that diagnosis and Shelly Sterling's authority to sell the franchise. On June 9, his lawyers filed a motion to revoke the terms of the family trust.

"His state of mind is very sharp," said Samini, Sterling's attorney, on Thursday. "He's been undergoing his own tests from his own medical experts and I can tell you the preliminary findings are quite opposite to what you have seen so far."

According to court records obtained by ESPN.com, the purchase agreement between Ballmer and Shelly Sterling holds that either Donald Sterling must consent to the sale or a court must validate her authority to act as the sole trustee.