D.J. Reader learns to overcome grief over his father's death to realize his NFL dream

ESPN
By Tania Ganguli
GREENSBORO, N.C. -- With each step D.J. Reader got closer to a reality he avoided for so long.

Nervously, he walked between the flower-decked gravestones, toward a place where his father once told him not to dwell.

"When it's over I don't want y'all just spending time over here," David Reader would say. "Because my spirit is not there and there's nothing you can do to change the outcome."

D.J. internalized that. Never one for closure, he didn't seek it when kidney failure finally claimed his father on June 30, 2014, at the age of 51. He never tortured himself with "Why?" He never visited the cemetery after the funeral. He never sought help to emerge from the quicksand of emotion that was thickening around him. He just allowed himself to sink.

It nearly swallowed the future he has now, but help came from those around him. Forced to take it, D.J. slowly began to realize that he needed things he didn't think he did. Clemson mandated he attend counseling sessions, and ultimately he missed six games in 2015 to do it.

In May, the Houston Texans drafted the defensive tackle in the fifth round, hoping he'd one day outplay that draft slot. He is still playing football because of his father's sacrifice -- two kidneys being necessary to play such a violent sport, and David wouldn't allow his son to donate one. But he's also still playing football because he finally got professional help for the psychological toll that came with losing the man who had been his teacher in so many ways.

And so on a hot July afternoon, D.J. wanted to take one more step toward closure. He sat on a chair in his mother's living room, eating a plate of fruit over a coffee table after a workout. He recounted all the painful details of the morning he learned his father died, and then he asked her a question.

"Can we go over to the grave site?"

Protecting family until the end

Earlier that day, Felicia Reader sat in her living room with her warm gray dreadlocks pulled away from her face and tied behind her head. One room in this house is her office -- it used to be the schoolroom where her husband taught D.J. once his rheumatoid arthritis grew too debilitating for him to teach in a school anymore.

In homeschooling his son, the lifelong educator found a new student.

The parents tag-teamed coaching D.J.: Felicia's father played baseball in the Negro Leagues, and she attended college on a softball scholarship, so baseball was her department. Her husband coached him in basketball and football. When David's arthritis prevented him from fulfilling coaching duties, Felicia gladly stepped in.

Basketball practices at a recreational center two miles from home became the first time D.J. had to share his dad with others to whom he was also a coach. In D.J.'s recollection, when he misbehaved, his dad would make him walk home from the center. Felicia noted that all the while David would drive his car slowly behind his son, watching over him during his punishment.

As D.J. grew older, he often shared his father with others. Other kids around Greensboro leaned on David Reader. He loved teaching, and had students even after he stopped homeschooling D.J.

"He really cared about youth," said Pat Neal, D.J.'s football coach at Grimsley High School. "He cared about education. Kids couldn't really pass the SAT, so he came to me one day and said let's try the ACT. We had seven or eight that were getting scholarships but couldn't pass the test. He took them, tutored them. All passed the test.

"He took time with other kids, not just his own. D.J. had to share his father with everybody else. You don't find that with a lot of people. You find people who pick and choose."

He became a father figure to some of D.J.'s teammates at Clemson, young men who often appeared at the Readers' home a three-hour drive away and helped themselves to their fridge.

"There were things that I was going through at Clemson that led to me leaving Clemson," said Shaq Anthony, D.J.'s roommate at Clemson. "I would talk to him all the time about school, football, social life, staying level-headed. ... He was almost like a second father to me."

Medication helped his arthritis, but it also damaged David's kidneys. As they deteriorated, D.J. discovered through a blood test that he was a match to donate his kidney. David wouldn't hear of it. He knew D.J. had a future as a professional athlete and didn't want to derail that. David refused Felicia's offer, too, protecting his family until the end. He worried about endangering Felicia and potentially leaving D.J. without either of his parents.

While D.J. got tested, David refused to let his wife even take that step. She tried to argue the point.

"Tried, but I knew it wasn't going to work," Felicia said. "A very giving man, a very loving man, a very stubborn man. When it was something that would impact D.J. or Felicia, it was no moving. Nobody could've moved him."

The day David Reader died felt like a terrible dream sequence to all of them.

Late on the night of June 30, 2014, Felicia heard her husband struggling to breathe. She called 911. She administered CPR, trying desperately to revive him, even hesitating to leave his side when the paramedics arrived.

In the emergency room, she sat alone. Having misunderstood her phone messages, the rest of her family rushed over to her home instead of the hospital. D.J. was at Clemson for summer school, just back there after a beach vacation with some teammates.

Soon the doctor emerged. Before he said anything, she knew.

"For about two hours I was at the hospital by myself with David," Felicia said. "I had the opportunity to cry, to pray and to make sure he was how I wanted him to be when they picked him up to take him to the funeral."

Getting the news to D.J. took his whole Clemson village.

Jeff Davis, another Greensboro native and Clemson's assistant athletic director of football player relations, went to D.J.'s apartment to tell him. But first, he called Stephone Anthony, a Clemson linebacker who later became a first-round draft pick. Anthony woke up teammates Shaq Anthony and Carlos Watkins around four in the morning while D.J. groggily wondered what his roommates were up to.

They were all there with D.J. when Davis shared the news. They watched him fall to the ground.

After the funeral, he refused to go back to the cemetery again. He played an entire football season without addressing, to himself or anyone else, that the last conversation he ever had with his dad was suffocating him.

That conversation happened right before D.J. went on that beach trip with his teammates. He brought his dog, Summer, and Shaq Anthony's dog, Ace, to his parents' home, dropped them off and left without saying anything. When he returned, David told D.J. that disappointed him. The sting of that disappointment festered after David died.

What he didn't realize then, or for months afterward, was his father knew his life was ending soon. He wanted to prepare D.J. for life without him.

Clemson went 10-3 that season and played in the Russell Athletic Bowl in Orlando. That game was on Dec. 29. Away from his family for Christmas for the first time, the pain began to simmer. It erupted at the end of June 2015, on the anniversary of his father's death. On July 1, 2015, D.J. turned 21.

"I was out of it," D.J. said. "Wasn't a great person. ... Losing my dad, he was like my best friend, my rock. I never had to seek male attention before because I had a male figure in my life. Not having that was real hard for me because I didn't have anybody to talk to. At least I felt like I didn't. I did, but I pushed them away."

His brother Wesley Lewis, 11 years older, tried to fill the fatherly void. Around that time, the two of them got matching tattoos that said "my brother's keeper."

Others offered support, but D.J. withdrew from his friends. He'd spend hours around them not saying anything. The big, gregarious young man he had been disappeared. Felicia told him her employer, American Express, offered free counseling, but he didn't want it. All the while, that last conversation with his dad -- the disappointment he heard in David's voice -- clung to D.J. He let it jeopardize his future.

"My values were down, everything was down," D.J. said.

His teammates and coaches saw it and, after a breaking point D.J. didn't want to discuss, mandated he seek counseling. By helpful accident, that counseling changed his life. By doing it, he realized how much he needed it.

When the four weeks passed, he had more work to do so he stayed. It helped that Clemson didn't lose any of the six games he missed. He knew his team was OK in his absence. He returned to the team on Oct. 19, once his heart and mind had healed.

Things changed. He earned his degree from Clemson by the end of that fall and eventually returned to the team's starting lineup. The spring became a time to prepare for the NFL draft and meet with prospective teams.

He never thought it would be the Texans. That meeting lasted about an hour. He met defensive line coach Anthony Weaver, defensive coordinator Romeo Crennell and general manager Rick Smith. He left wondering why they brought him there.

The Texans' 2016 draft class was small, and D.J. was their last selection. He watched the draft at his brother Wesley's house with close family members. Relief settled in when the Texans called in the fifth round.

"I'd give all this up to have my dad back," D.J. said. "Nothing compares to having your father here. If I had the option of playing football or having him back, I'd choose him every time. He'd want me to be doing what I'm doing now."

David Reader always knew his son would one day be a professional athlete.

At Lakeview Memorial Park, D.J. and Felicia walked together, in the low-90 degree North Carolina heat, through a cemetery unfamiliar to D.J. but one Felicia knew well.

They tore away weeds that had grown over some parts of the gravestone. He leaned over to grab them while holding a bouquet of artificial flowers in his left hand. They replaced the previous set of flowers with this one filled with orange, yellow, white and hot pink lilies. Purple cattails and green leaves peeked from between them.

He crouched down to speak to his father. He kissed his fingers and touched them to a tattoo with the initials "asnf," a son never forgets. He bowed his head. He wiped his eyes with his T-shirt. This was so much harder than he thought it was going to be.

He stood up and, Felicia walked over to him.

"He was a loving husband and father," she said, after reading the gravestone. It has her name beneath her husband's. The birth year is the same as his, and the other side of the dash remains blank.

D.J. put his left arm around her and they stood there looking down together. Felicia sniffed and D.J. did, too. He turned for a bit to wipe his eyes again. He needed this. 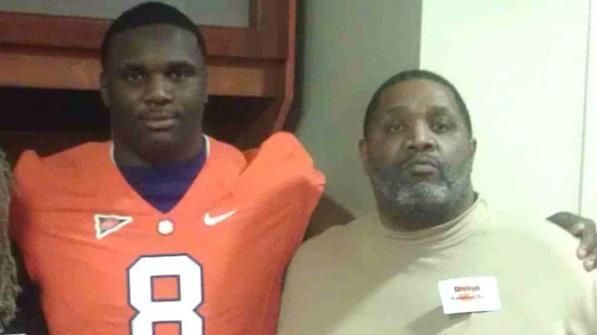