De La Hoya to Mayweather: 'As for your fights? We've already forgotten them' 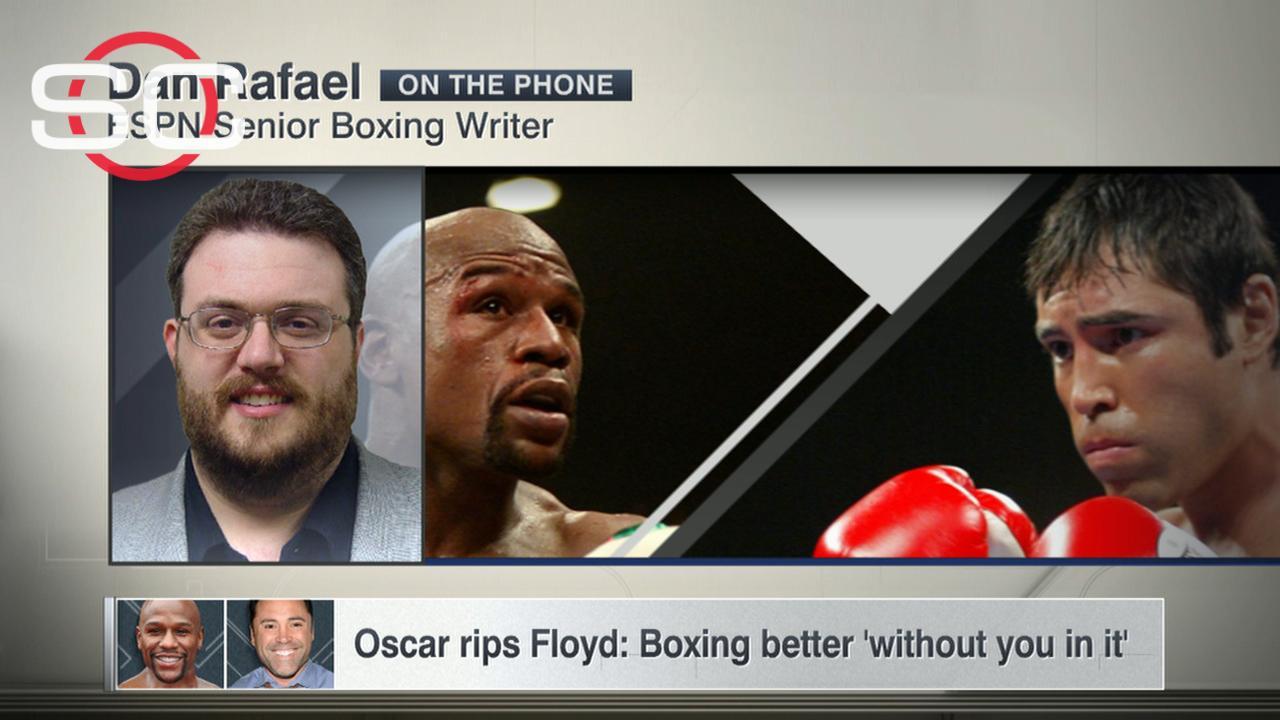 Oscar De La Hoya, the Hall of Fame fighter whose Golden Boy Promotions has become one of boxing's leading promoters, shredded Floyd Mayweather in an open letter, saying that he was "boring" and that "the fight game will be a better one without you in it" in the wake of his recent retirement.

In the letter, which appears in the December edition of Playboy magazine, De La Hoya took all kinds of shots at Mayweather, the former pound-for-pound king who retired following his expected rout of Andre Berto on Sept. 12.

"You did it. You made it to the 49-0 mark, a milestone that you like to say only the great Rocky Marciano reached but that was actually achieved by others, including my idol Julio Cesar Chavez -- but who's counting," De La Hoya wrote. "And now you're retiring. Again. (The first time was after our fight in 2007.) This time you say it's for real. You're serious about hanging up the gloves. On to bigger and better things. So I'm writing to you today to wish you a fond farewell. Truth be told, I'm not unhappy to see you retire. Neither are a lot of boxing fans. Scratch that. MOST boxing fans. Why? Because the fight game will be a better one without you in it."

That was only the beginning of De La Hoya's 1,148-word arrow at Mayweather.

"Let's face it: You were boring," De La Hoya wrote. "Just take a look at your most recent performance, your last hurrah in the ring, a 12-round decision against Andre Berto. How to describe it? A bust? A disaster? A snooze fest? An affair so one-sided that on one judge's card Berto didn't win a single round? Everyone in boxing knew Berto didn't have a chance. I think more people watched 'Family Guy' reruns that night than tuned in to that pay-per-view bout. But I didn't mind shelling out $75 for the HD broadcast. In fact it's been a great investment. When my kids have trouble falling asleep, I don't have to read to them anymore. I just play them your Berto fight. They don't make it past round three."

The first fight of Mayweather's that Golden Boy promoted was when Mayweather won a split decision against De La Hoya to win the junior middleweight world title in 2007. At the time, it was the richest fight in boxing history. It set records -- which have since been broken -- for most pay-per-views sold and generated the biggest live gate and most overall revenue in boxing history.

De La Hoya also attacked Mayweather for his aversion to fighting the best fighters when they were at their best.

"Another reason boxing is better off without you: You were afraid. Afraid of taking chances. Afraid of risk. A perfect example is your greatest 'triumph,' the long-awaited record-breaking fight between you and Manny Pacquiao," De La Hoya wrote, referring to the May 2 fight that set every revenue record in boxing. "Nearly 4.5 million buys! More than $400 million in revenue! Headlines worldwide! How can that be bad for boxing? Because you lied. You promised action and entertainment and a battle for the ages, and you delivered none of the above. The problem is, that's precisely how you want it.

"You should have fought Pacquiao five years ago, not five months ago. That, however, would have been too dangerous. Too risky. You've made a career out of being cautious. You won't get in the ring unless you have an edge. Sure, you fought some big names. But they were past their prime. Hell, even when we fought in 2007 -- and I barely lost a split decision -- I was at the tail end of my career. Then later you took on Mexican megastar Saul 'Canelo' Alvarez, but he was too young and had to drop too much weight."

When De La Hoya fought, he consistently took on the best fighters in their primes.

"I got into this business to take chances. I took on all comers in their prime," he wrote. "The evidence? I lost. Six times."

De La Hoya went on to detail his losses to the best in the business, including to prime Felix Trinidad, Shane Mosley, Bernard Hopkins, Mayweather himself and Pacquiao.

"The mantra of my firm Golden Boy Promotions is simple: the best taking on the best. It's too bad you didn't do the same," De La Hoya wrote. "You took the easy way out. When you weren't dancing around fading stars, you were beating up on outclassed opponents. A lot of your opponents were above-average fighters, but they weren't your caliber. You're a very talented fighter, the best defensive fighter of our generation. But what good is talent if you don't test it?

"Muhammad Ali did. Sugar Ray Leonard did. You? Not a chance. You spent 2000 to 2010 facing forgettable opening acts like Victoriano Sosa, Phillip N'dou, DeMarcus Corley, Henry Bruseles and Sharmba Mitchell. There were guys out there -- tough scary opponents like Antonio Margarito and Paul Williams -- but you ran from them. Were you ever on the track team in high school? You would have been a star.

"Boxing will also be a better place without the Mouth. Your mouth, to be precise, the one that created 'Money' Mayweather. I know you needed that Money Mayweather persona. Before he and Golden Boy Promotions came along, nobody watched your fights. You couldn't even sell out your hometown of Grand Rapids, Michigan. The Mouth made you money. More money than you could spend in a lifetime. (Wait, I've seen those episodes of 24/7. You probably will spend it all.) But the Mouth doesn't have a place in boxing; save it for the WWE. Unless you're someone like Ali, whose fights were as scintillating as his banter, the all-talk, no-entertainment model cheapens our sport. Boxers should speak with their fists and with their hearts. They don't have to say anything to prove themselves. You're going to have a legacy. You'll be remembered as the guy who made the most money. As for your fights? We've already forgotten them."

De La Hoya went on to extol the virtues of many of today's top fighters, who fight in a crowd-pleasing style and are willing to fight opponents in their prime. He named fighters such as Alvarez, Gennady Golovkin, pound-for-pound king Roman Gonzalez and Sergey Kovalev as well as rising stars Terence Crawford, Vasyl Lomachenko and Keith Thurman.

"You're moving on to a new phase of life now, a second act," De La Hoya wrote. "I'm sure it will be nice not to have to train year-round. ... But I'm wondering what you're going to do. You have a lot of time and, at the moment, a lot of money. Maybe you'll put your true skills to work and open a used-car dealership or run a circus. Or maybe you'll wind up back on 'Dancing With the Stars.' It's a job that's safe, pays well and lets you run around on stage. Something you've been doing for most of your career." 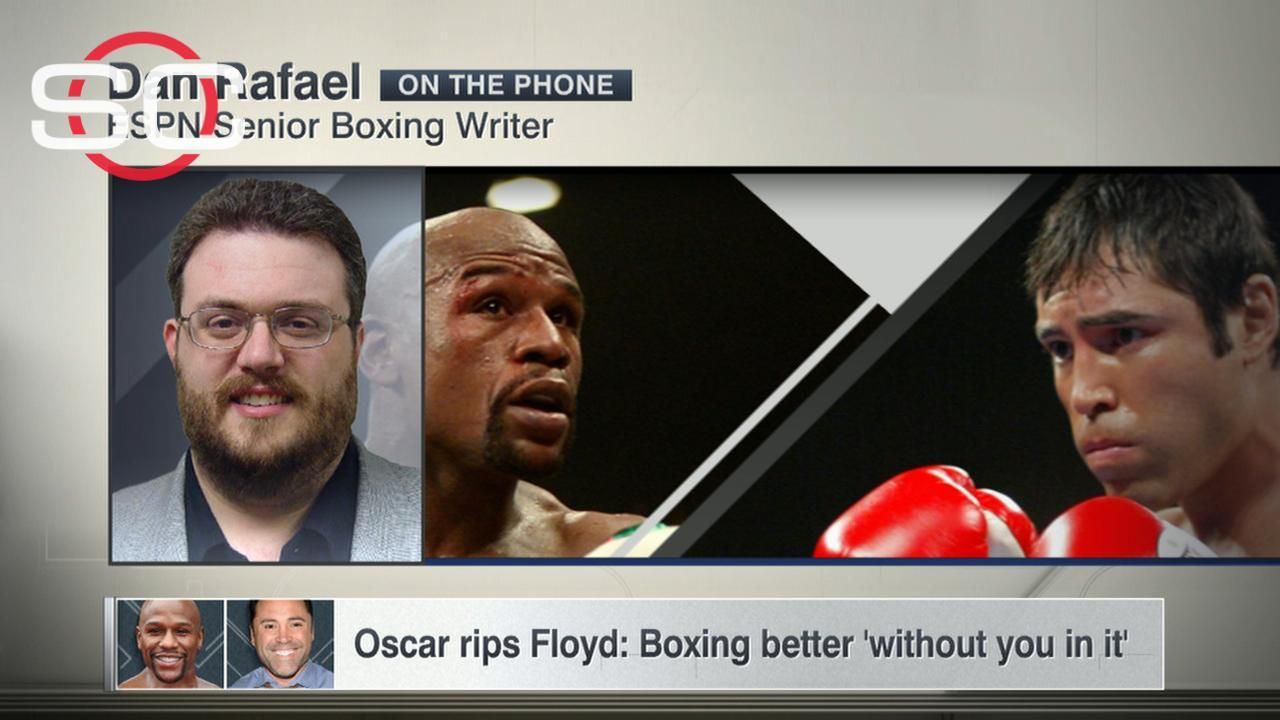