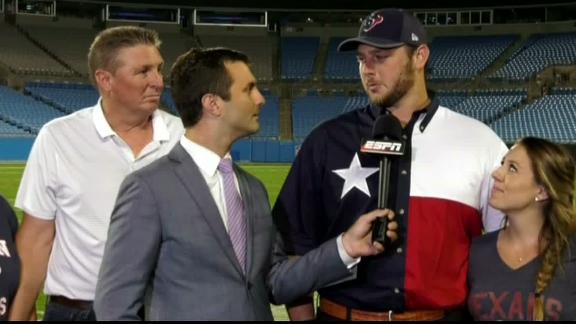 CHARLOTTE -- Wednesday night's preseason opener was a special one for Houston Texans offensive tackle David Quessenberry, who played in an NFL game for the first time since he was diagnosed with non-Hodgkin T-lymphoblastic lymphoma three years ago.

Quessenberry finished his last chemotherapy treatment in early April and returned to the practice field for the first time during OTAs. He had been on the Texans' non-football illness list since 2015.

"To come from where he's come from, it's just incredible that he just played in an NFL football game," Texans head coach Bill O'Brien said. "I'm telling you, just think about that -- all that he's been through. How special he is to this organization. To be able to go out there and play in an NFL game is a pretty big deal."

Quessenberry was out on the field early during warm-ups, taking in the moment of finally being able to prepare for an NFL game. While he was down on the field pregame, his family surprised him by showing up for his first game in three years.

"I was nervous for about three days leading up to this," Quessenberry said. "Even a preseason game. It was probably the most nervous I've been for a football game in my life. Before the game I got really emotional when I saw some of my family out there on the sideline. But once the first play started, it was back to football."

Quessenberry said the support he received from teammates meant so much to him while he worked to beat cancer and get back on the field.

"The guy's a warrior," Texans defensive end J.J. Watt said. "He's a fighter. He's an inspiration to all of us. I think [Quessenberry] deserves every bit of headline and every bit of praise that everybody gives him, because he's a hell of a player and a hell of a guy, and we couldn't be more proud to have him on our team."

Quessenberry became emotional when hearing what his teammates had said about his return.

"[My teammates] know everything I've been through," Quessenberry said. "They see me go through chemo, they see me with no hair. And to be back in that jersey ... it was really big.

"Before the game I was just thinking about how long it's been. It was perfect."

Quessenberry escatic to be back playing football
David Quessenberry and his family explain what it was like seeing him back on the football field for the Texans for the first time since he was diagnosed with cancer.
Report a correction or typo
Related topics:
sportsespnpreseasonhouston texansnfldavid quessenberrycancer
Copyright © 2020 ESPN Internet Ventures. All rights reserved.
More Videos
From CNN Newsource affiliates
TOP STORIES