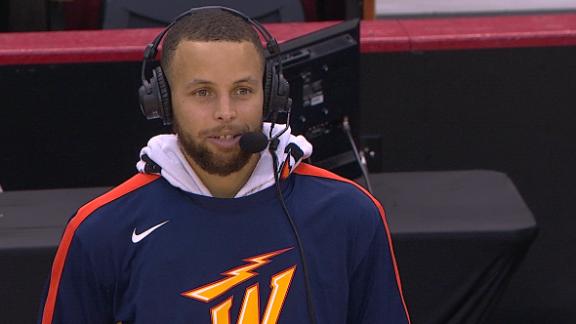 HOUSTON -- - Stephen Curry bounced back from a rough first half with 23 of his 30 points in the third quarter, and the Golden State Warriors beat the Houston Rockets 113-87 on Saturday night.

Curry was just 2 for 12 in the first half, then didn't even need to play in the fourth quarter after the Warriors outscored the Rockets 39-12 to take an 88-67 lead.


Andrew Wiggins had 20 points for Golden State, and Mychal Mulder and Jordan Poole both added 17 off the bench.

"The first half, we just couldn't get anything going," Warriors coach Steve Kerr said. "Obviously, we thrive on Steph so when he couldn't hit shots early, we were kind of stuck in the mud. But in the second half, once he made a couple of shots, our energy picked up, our body language was better, and we were able to take control."

The Warriors ran away with the game at the start of the second half, opening up the third quarter on a 28-4 run. The Rockets made just one field goal in the first 7:43 of the third quarter, as their six-point halftime lead turned into an 18-point deficit.

After hitting his first 3-pointer of the third quarter, Curry let out an extra little celebratory yell.

"There was a little cloud hanging over us," Curry said. "We didn't play terrible in the first half, but we just didn't make any shots. We needed some joy, some energy, some good vibes and smiles. Sometimes, you've got to force it a little bit."

Porter was coming off a breakout performance against Milwaukee on Thursday, when he became the youngest player in NBA history to have 50 points and at least 10 assists in a game. Porter turns 21 on Tuesday.

The Rockets led 55-49 at halftime after a corner 3 from Armoni Brooks at the buzzer.

Curry and Rockets coach Stephen Silas embraced for an extended period after the game and had a brief discussion. Silas was an assistant coach with the Warriors for 4 1/2 seasons from 2006-10, including Curry's rookie campaign in 2009-10.

"He was just saying how happy he is for me and that he's looking forward to seeing the turnaround when it happens here in Houston under my leadership," Silas said. "He's great. We went through times back when we were kind of going through this point."

There were midgame reports that Oubre suffered ligament damage to his wrist, and Kerr said he was informed of the reports after the game but didn't have specifics on Oubre's status. Kerr said he knew Oubre reaggravated the injury recently but said he would likely provide an update on Sunday.

Steph: Game was waiting on me after poor first half
Steph Curry says the team's ability to get stops was the key to fueling their third-quarter run.
Report a correction or typo
Related topics:
sportsespngolden state warriorshouston rocketsnba
Copyright © 2021 ESPN Internet Ventures. All rights reserved.
More Videos
From CNN Newsource affiliates
TOP STORIES