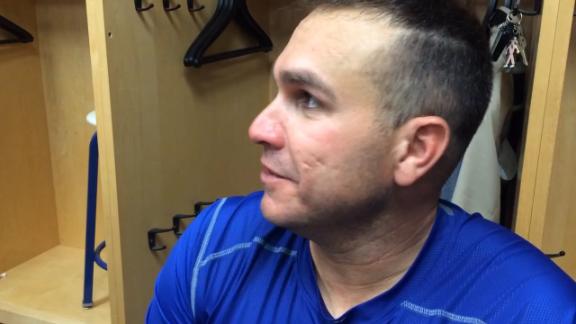 SURPRISE, Ariz. -- At least one Chicago Cubs smokeless tobacco user is finding the bright side in a new ban that would produce fines for players caught using at Wrigley Field or U.S. Cellular Field.

"It's going to be hard because you're an addict, pretty much," catcher Miguel Montero said after being informed of the ban on Wednesday. "It'll be tough to quit cold turkey. Hopefully (this) will help me to quit."

But Montero also joined others, including pitcher John Lackey and manager Joe Maddon, in expressing disappointment that the city of Chicago is telling players what they can or cannot do with a legal substance.

"We're grown men," Lackey said. "People in the stands can have a beer, but we can't do what we want? That's a little messed up."

Chicago became the fourth city to ban smokeless tobacco at sports venues, joining San Francisco, Los Angeles and Boston in attempting to reduce its use in athletics.

In fact, the state of California has approved the measure as well, affecting stadiums in Oakland, Anaheim and San Diego beginning in 2017. And New York will vote Tuesday on the same measure.

It will become law in Chicago in 90 days, right in the middle of the baseball season.

"I'm into personal freedoms," Maddon said. "I don't understand the point with all that. Just eradicate tobacco period if you're going to go that route. I'm not into over-legislating the human race, so for me I'll just have to listen and learn."

Maddon and Lackey, both non-users, expressed more pushback over the new ban than Montero, who said he couldn't remember when he started using because it has been so long.

"I'll probably be a little bit moody," Montero joked about quitting. "I'm going to do my best to try and not use it."

A first offense will result in a fine of not less than $250, then $500 for a second violation and not less than $2,500 for each additional violation that occurs within one year of the first offense. Maddon was adamant that his players follow the new rules but said he simply believes in the freedom to make up one's mind when it comes to a legal substance.

"I will not advise them to run counter to whatever is going on," Maddon said. "A lot of that stuff I have a hard time with. I'm the wrong guy to talk to about that. If someone is going to make up my mind for me ... that's where I draw the line personally.

"I stopped chewing tobacco 15 years ago. I know the pitfalls. I'm into education. Educate the masses, and then everybody can make their own decisions. That's what I'm all about."