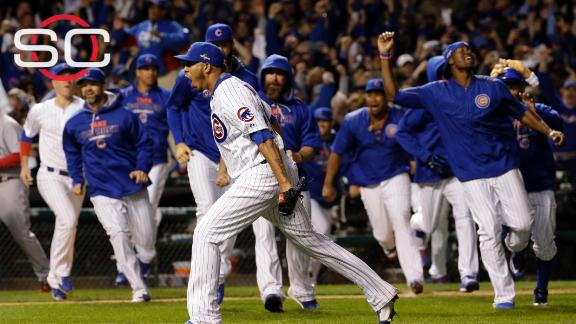 CHICAGO -- Joe Maddon posed for a selfie on the field with his wife. Jon Lester sprayed champagne with his young son. Rocker Eddie Vedder partied on the mound.

For the Chicago Cubs and their ever-hopeful fans, this bash was a long time in the making.

Javier Baez, Anthony Rizzo and Kyle Schwarber homered, and the young Cubs clinched a postseason series at Wrigley Field for the first time by beating the St. Louis Cardinals 6-4 Tuesday to win the NL Division Series in four games.

"This is all just baseball fantasy, right?" a drenched chairman Tom Ricketts said.

Only once since they brought home the World Series in 1908 had the Cubs won a playoff series, and never before had they finished the job at their century-plus-old ballpark.

But with a raucous, towel-waving crowd jamming the Friendly Confines, the North Siders gave generations of fans exactly what they wanted. As they gathered in the pulsating neighborhood, the marquee at Wrigley Field said it all: "Cubs Win."

"I can only imagine what the next thing is going to look like," said Lester, the lefty who won the World Series with Boston twice. "And the next thing after that."

The crowd started roaring before the first pitch. When closer Hector Rondon struck out Stephen Piscotty on a ball in the dirt and catcher Miguel Montero made the tag to end it, the Cubs came streaming out of the dugout.

"They deserve it," Rizzo said in the middle of the party. "Hopefully, this is just a taste of what's to come."

As the music blared and the strobe lights flashed in the clubhouse, Cubs players and coaches soaked one another. Then they took the celebration back onto the field as fans went crazy.

Up-and-comers all season under their first-year manager, Maddon's bunch of wild-card Cubs has arrived. They will face the winner of the Los Angeles Dodgers-New York Mets matchup. The Dodgers tied the series with a win Tuesday in Game 4. Game 5 will be Thursday in Los Angeles.

Chicago will play Game 1 Saturday on the road.

No team was hotter down the stretch than Chicago, which finished third in the majors with 97 wins after five straight losing seasons. The Cubs then knocked out the two teams that finished ahead of them in the NL Central. They beat Pittsburgh in the wild-card game and sent St. Louis home after it led the majors with 100 wins.

"I think we're too young to even realize what we just did,"Kris Bryant said. "It truly is a special time right now."

The banged up Cardinals had reached the NLCS the past four years.

"It was just unfortunate," St. Louis manager Mike Matheny said. "This is a team that was as impressive to watch from Day One as any team I've ever been around. That's always hard to walk away from. We had an opportunity maybe to get back home and do things differently, but they took advantage of the opportunities they had."

Rizzo's solo drive to right off losing pitcher Kevin Siegristput Chicago back on top 5-4 in the sixth, after St. Louis scored two in the top half of the inning.

As if the fans weren't already hollering at the tops of their lungs after that home run, they were really screaming after Schwarber's monstrous shot to lead off the seventh. The ball landed on top of the right-field video board and wound up nestled against a railing on the front edge.

The late drives by Rizzo and Schwarber, along with Baez's three-run homer off John Lackey in the second, came after Chicago set a postseason record with six long balls in Monday's win. With the ball flying out again Tuesday, the Cubs won for the 12th time in 13 games.

Cubs starter Jason Hammel allowed two runs and three hits. He exited after giving up a leadoff walk to Jhonny Peralta in the fourth.

Seven relievers combined to hold the Cardinals to two runs and five hits the rest of the way. Trevor Cahill picked up the win, and Rondon worked the ninth for the save.

Hammel settled down after giving up a two-run homer to Piscotty on the game's fourth pitch. He singled in a run with two outs in the second before Baez connected against Lackey, the man the Cardinals were counting on to keep their season going, to make it 4-2.

The Cardinals, playing without catcher Yadier Molina (left thumb), failed to advance in the postseason after winning at least one series the previous four years.

"I definitely think the ballpark had something to do with this," Lackey said. "They also have a really good lineup."

St. Louis scored two in the sixth to tie the game. But the rally ended with Tony Cruz -- who drove in a run with a two-out double -- being thrown out at home by Jorge Solerwhile trying to score on Brandon Moss' RBI single to right.

"I will be shocked if they're not in the World Series or winning it," Piscotty said. "They're playing well. You got to tip your hat."

The Cubs are headed to their fourth NLCS. ... Chicago batters hit 10 homers in the NLDS.

Cardinals: Matheny said he planned to have Molina in the lineup after the loss in Game 3, but Molina's injured thumb did not make enough progress overnight. Cruz started in his place.

Cubs: SS Addison Russell had tests on his hamstring Tuesday morning and didn't play. "I haven't gotten any finalized conclusions from anybody yet," Maddon said. "He's not going to play today, of course." Baez took Russell's spot.

Cubs moving on to the NLCS
The Cubs hit three home runs and hold off the Cardinals 6-4 to advance to the NLCS for the first time since 2003. 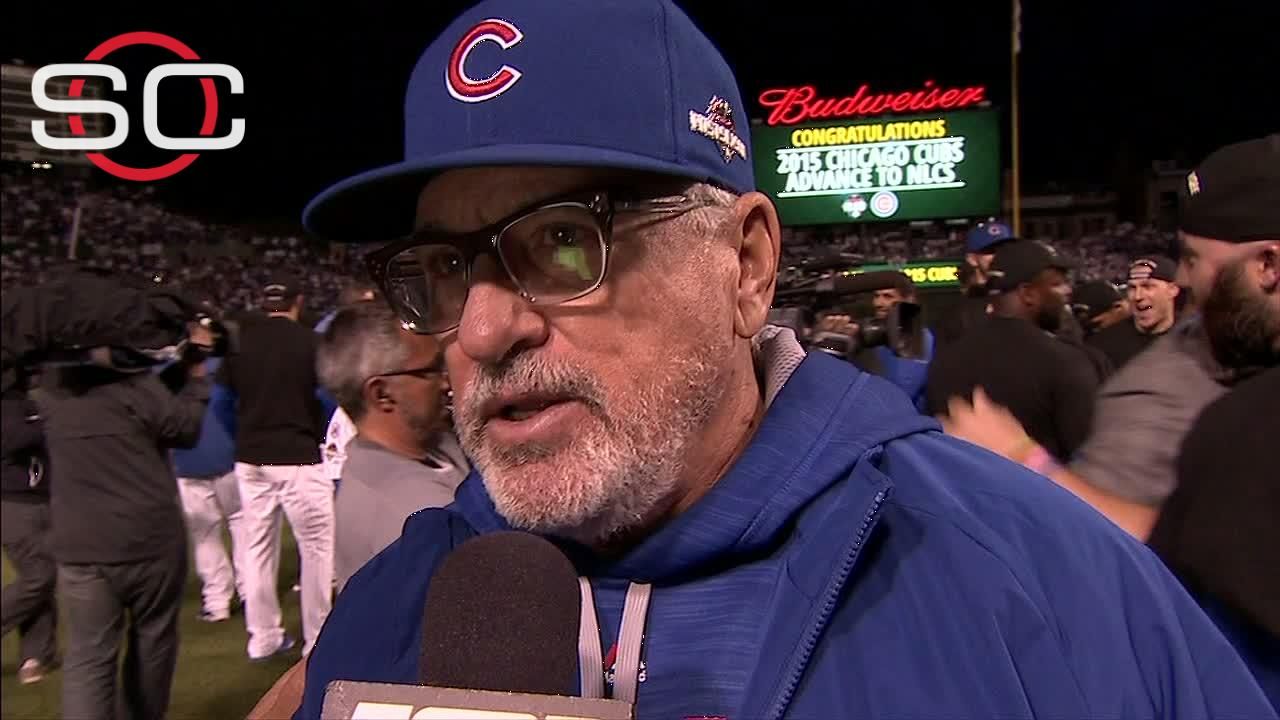 Maddon: The feeling is indescribable
Cubs manager Joe Maddon attempts to explain his emotions after the Cubs win their first ever postseason series at Wrigley Field.