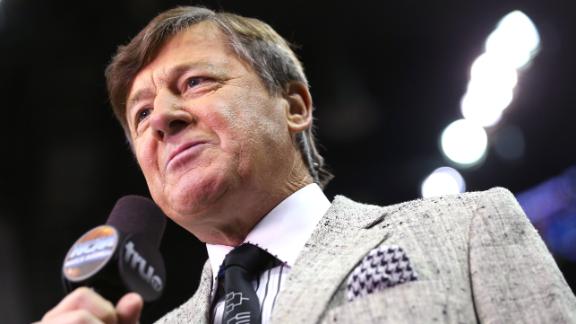 After three weeks of undergoing chemotherapy to fight leukemia, veteran broadcaster Craig Sager is leaving the hospital, according to his son.

A tweet from his son indicated that Sager would be released Friday, and though he has more treatment to come, his health is improving dramatically.

He will have to return to clinic every day for the next few weeks and he is still waiting on bone marrow procedure but he CRUSHED CHEMO!!!

- Craig Sager II (@CraigSagerJr) May 9, 2014Earlier this week Sager chronicled his past few weeks for Bleacher Report. He wrote that the NBA playoffs have been his best therapy, doctors say he is doing great, and the outpouring of support has been amazing.

"All the doctors say I'm doing remarkable, doing the best I can possibly do, no bad reactions," Sager wrote, according to Bleacher Report. "I haven't had any aftereffects from the chemo, and I'm staying healthy."

Sager wrote that he started to feel tired on April 9 and noticed he was short of breath. The next night he worked the San Antonio Spurs game against the Dallas Mavericks and afterward continued to feel tired and weak, so he spoke to a Dallas team physician, who suggested he go to a hospital immediately.

After tests and biopsies, he was diagnosed with leukemia, Sager wrote.

Numerous coaches and players from throughout the NBA have reached out, Sager wrote, and those well wishes have brought tears to his eyes. Coaches Gregg Popovich of the Spurs and Tom Thibodeau of the Bulls have contacted him, he said. Nets center Kevin Garnett sent a flower arrangement, and Clippers coach Doc Rivers sent a fruit basket.