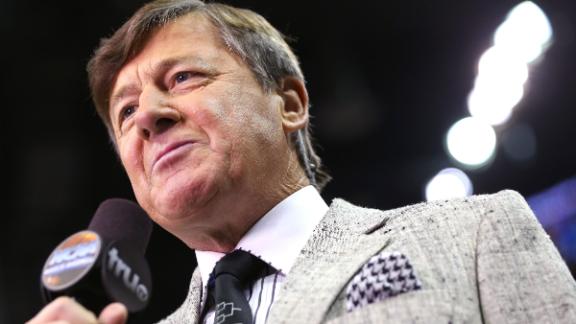 Veteran broadcaster Craig Sager has been diagnosed with leukemia.

The news was first tweeted by his son on Thursday and confirmed by Sager on Friday. Sager said in a statement, referring to TNT's coverage of the NBA playoffs: "My favorite time of year -- city to city, round by round, 40 games in 40 nights. A dramatic turn has matched me with acute myeloid leukemia. From the sidelines to being sidelined, 40 veins and 40 electrolytes."

He added at the end: "Too bad, I had some probing questions for Pop (Spurs coach Gregg Popovich)."

According to the tweet from his son, Sager started treatment on Friday.

My Dad's 3-4-week acute leukemia treatment starts tmrw.Be thinking of him & let's get him back on the sidelines soon pic.twitter.com/5CNI55p2Gx

- Craig Sager II (@CraigSagerJr) April 17, 2014Sager, who has spent nearly 20 years covering the NBA as a sideline reporter for Turner Sports and TNT, is known for the bold suits he wears during broadcasts. He has been broadcasting sports nationally since 1981, when he joined CNN.