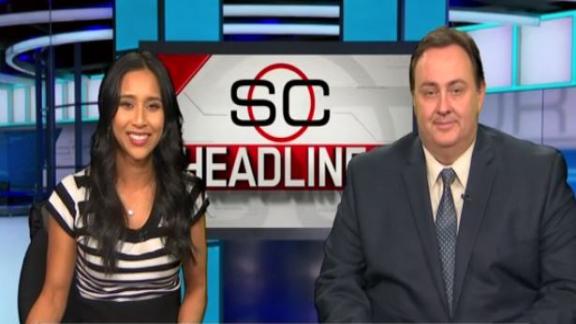 The 9th U.S. Circuit Court of Appeals on Wednesday upheld a lower court's ruling in the Ed O'Bannon case that the NCAA violated antitrust laws by limiting student-athlete compensation, but also ruled against a plan to pay student-athletes as much as $5,000 annually.

In a split decision, the three-judge panel ruled in a 73-page opinion that U.S. District Court Judge Claudia Wilken's plan -- which would allow schools to pay athletes as much as $5,000 annually, beyond the cost of attendance, for the use of their name, image and likeness -- was "erroneous." Chief Judge Sidney R. Thomas argued in favor of the additional payments, but the other two judges disagreed.

"The difference between offering student-athletes education-related compensation and offering them cash sums untethered to educational expenses is not minor; it is a quantum leap," Judge Jay Bybee wrote. "Once that line is crossed, we see no basis for returning to a rule of amateurism and no defined stopping point."

The panel vacated the part of Wilken's ruling that required the NCAA to allow its member institutions to pay athletes $5,000 per year in deferred compensation.

"We have not completely reviewed the court's 78-page decision, but we agree with the court that the injunction 'allowing students to be paid cash compensation of up to $5,000 per year was erroneous,'" NCAA president Mark Emmert said in a statement. "Since Aug. 1, the NCAA has allowed member schools to provide up to full cost of attendance; however, we disagree that it should be mandated by the courts."

O'Bannon, the former UCLA basketball star, won his antitrust lawsuit against the NCAA in August 2014 after claiming the organization was using the names, images and likenesses of college athletes to profit commercially without compensating the athletes.

"The NCAA is not above the antitrust laws, and courts cannot and must not shy away from requiring the NCAA to play by the Sherman Act's rules," the panel wrote. "In this case, the NCAA's rules have been more restrictive than necessary to maintain its tradition of amateurism in support of the college sports market. The Rule of Reason requires that the NCAA permit its schools to provide up to cost of attendance to their student athletes. It does not require more."

The ruling might open the door for the NCAA to take the O'Bannon case before the U.S. Supreme Court.

Seth Waxman, one of the attorneys who argued the NCAA's case during the O'Bannon trial, said there were "obvious hooks" if the NCAA wanted to seek a review by the full 9th Circuit Court of Appeals or request an opinion from the U.S. Supreme Court. The NCAA and plaintiffs' attorneys have 14 days to seek a full review from the court of appeals and 90 days to petition the Supreme Court.

"There are plenty of important issues for the Supreme Court to decide if we decide to petition it," Waxman said.

Michael Hausfeld, O'Bannon's attorney, told ESPN's Tom Farrey that one of the most significant parts of the ruling was that the appellate court rejected the NCAA's argument that the Supreme Court has already ruled that college players cannot be compensated. As it has in past court challenges, the NCAA cited language in the majority opinion of a 1984 decision suggesting as much, though the focus of that case was on control over televised games.

The 9th Circuit, though, treated the language written by then-Justice John Paul Stevens -- "athletes must not be paid," without describing what constitutes pay -- as dicta, or nonbinding language separate from the central issue at the time.

"That's extremely significant," Hausfeld said. "The appellate court acknowledges that the athletes are being paid -- they're just being paid in the form of economic educational benefits. They're getting their education paid for."

O'Bannon argued that the NCAA illegally fixes the cost of compensation, which the court agreed with. Hausfeld said the fact that the appellate court rejected the $5,000 in additional payments that Wilken allowed doesn't mean players cannot be paid above the value of cost of attendance. Hausfeld said the court simply said that particular figure was deemed invalid.

On the contrary, Hausfeld said, the ruling recognizes there is a group licensing market that players have a right to, and he sees an opening for going after a share of the billions of dollars that are paid to televise games.

"We're going to go after that," Hausfeld said. "The athletes as a whole have a right to participate in the broadcast licensing market."

Sonny Vaccaro, who advises Hausfeld and lined up O'Bannon as a plaintiff, said he is "extremely happy" that the court ruled the NCAA is not exempt from the nation's antitrust laws.

"What this ruling did was throw out amateurism," Vaccaro said. "The NCAA just needs to sit down and make a deal now. It's better than spending millions of dollars to keep dragging this out."

Less enthusiastic was Ramogi Huma, president of the National College Players Association, which has played a role in several of the recent legal challenges to the NCAA economic model. Huma helped organize the Northwestern football team's signing of union cards, and won a regional decision by the National Labor Relations Board that players qualified as employees, only to have the NLRB at the national level decline to rule on the case, effectively ending that effort.

Huma said he likes the ruling that the NCAA is in violation of the antitrust law. But he finds that incongruous with Bybee's language expressing concern that it would be dangerous to cross the line of allowing any payment above cost-of-attendance athletic scholarships.

"It's disturbing that some of the higher elements of the federal government recognize that college athletes are correct in their arguments -- that colleges are violating their rights and that athletes are employees," Huma told Farrey. "And yet they're looking for excuses not to bring them justice. In 2015, there should be no group of Americans who are denied equal protections under the law."

The decision by the appeals court was met with mixed reaction by a coalition representing 31 conferences in the NCAA. It said it was pleased by the reversal of deferred payments but disappointed with other elements of the ruling.

"The best way to help students be successful in college and in life is by providing an education that also includes benefits for our students who play sports, such as scholarships, healthcare, insurance and in many cases, the full cost of attendance," the coalition said in a statement.

"It's important to remember that we're talking about students, not employees. Our goal is for our students to learn teamwork and leadership through sports, and then graduate and be successful. We will review the details of the decision carefully."

Donna Lopiano, a former University of Texas administrator who now works closely with the reform-minded Drake Group, said the ambiguity of the ruling and the other challenges facing the NCAA underscore the need for a blue-ribbon committee to carve a new path forward for college sports.

"We need a Presidential Commission to figure all this out," she said. "Use the federal government to get all the experts together and make sure that student-athletes get treated the right way."

NCAA chief legal officer Donald Remy said it was too early to tell how the ruling might affect other cases that challenge the NCAA's amateurism rules. A separate proposed class-action suit filed by sports attorney Jeffrey Kessler, who argued New England Patriots quarterback Tom Brady's Deflategate case on behalf of the NFL Players Association, is scheduled for a class certification hearing in Wilken's court Thursday.

Legal experts believe the Kessler case might be a bigger threat to the NCAA and its member institutions because it argues student-athletes should be allowed to negotiate how much compensation they receive from colleges in an open market.

"We're analyzing that," Remy said. "I think what is clear is that the court has made a determination with respect to cost of attendance that will likely have some bearing on her ruling regarding class certification. We'll just see how that plays out during the hearing."

Remy also said the NCAA might attempt to use Wednesday's ruling to have legal fees reduced in the O'Bannon case. Plaintiffs' attorneys in that case are seeking about $50 million in legal fees and court costs.

"This has been a long going discussion before the court in terms of what legal fees and costs might be appropriate and what legal fees and costs we believe not to be appropriate," Remy said. "Some of the arguments we made were directly related to whether or not there was success on certain issues that had been presented by the plaintiffs' attorneys in the O'Bannon case. I think we'll continue to evaluate this ruling and continue to advance those arguments."

Information from ESPN.com's Tom Farrey was used in this report.