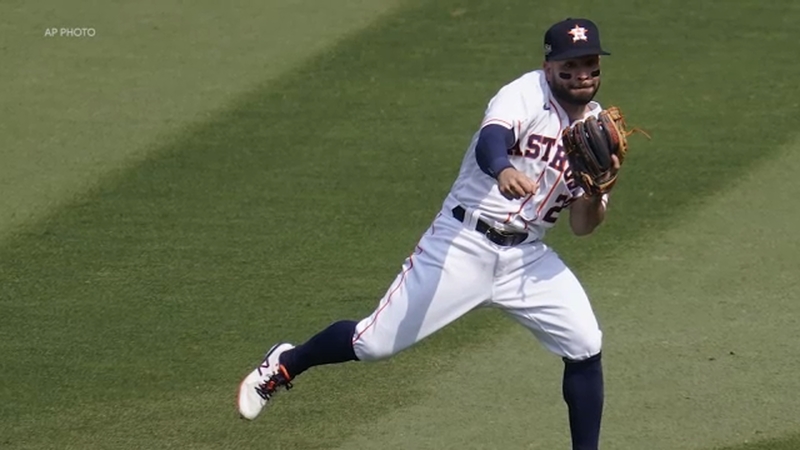 Could Jose Altuve be having 'the yips'?

SAN DIEGO, California -- José Altuve was the AL MVP in 2017 when his Houston Astros sometimes knew exactly what pitches were coming.

Now, he doesn't even know where his own throws are going.

Altuve committed his fourth throwing error this postseason and third of the AL Championship Series on Tuesday night in the sixth inning of the Tampa Bay Rays' 5-2 victory over Houston in Game 3.

The normally reliable second baseman has an undeniable case of the yips, and it has bitten the Astros badly. The defending AL champions have slipped into an 0-3 series deficit, and the franchise is on the brink of getting swept for the first time since the 2005 World Series.

Altuve also made two throwing errors in Game 2 of the ALCS, contributing significantly to the Astros' 4-2 loss. His three errors in the last two games led to five runs while prolonging rallies that would have been largely shut down by solid defensive play.

"We're giving him all the support that we can," Houston manager Dusty Baker said. "Nobody feels worse than José, because he takes it very serious and takes it to heart. He's one of ours, and we've all been through this before. Not in this spotlight like this. It hurts us all to see him hurting."

Baker also said Altuve will play second base when the Astros attempt to avoid elimination on Wednesday night in Game 4 saying, "Without a doubt. That doesn't help us (to make a change), and it would certainly kill him."

Altuve didn't speak to reporters for the second straight night, but the six-time All-Star's teammates and manager remained united behind him.

"Altuve is a great player, man," said shortstop Carlos Correa, Altuve's counterpart in the Astros' double-play combo since 2015. "He's going to be a Hall of Famer when his career is said and done. These games are tough, but he's going to bounce back from it, like he has before when things are tough. I think he'll be fine."

Altuve homered in the first inning of Game 3, but his sixth-inning error cleared the way for a five-run rally by the Rays, who scored all five of their runs immediately afterward.

With Randy Arozarena on first, Altuve fielded Brandon Lowe's grounder and botched a routine toss to second base on an attempted forceout. Altuve bounced his throw past Correa into left field with a noticeably unnatural throwing motion, ruining a strong chance at a double play.

With Altuve crouched at second in the same disbelieving posture he had after his second error in Game 2, the Astros removed starter José Urquidy, who had been pitching well before Altuve's mistake.

During the pitching change, Altuve stood by himself at second with his hat off while the other three Houston infielders went to the mound. Afterward, they went over to Altuve, giving him encouragement and support.

"I said, 'Keep your head up,'" Correa said. "'We've still got a lot of game left. We're going to win this game.' I blame myself for that error as well. I feel like I make that pick nine times out of 10, and I wasn't able to pick my teammate up on that one. When I look at the replay, I wish I could have made that play. I know the error is on him, but I blame myself."

The Rays promptly capitalized against reliever Enoli Paredes with back-to-back singles to take the lead. Joey Wendle's two-run single with the bases loaded put Tampa Bay up 2-1, and pinch-hitter Hunter Renfroe's two-run double made it 5-1 before the inning finally ended with 11 Rays coming to the plate.

Altuve's errors contrast sharply with the near-flawless defense being played by the Rays, who have made a handful of sparkling defensive plays in each game of the ALCS.

Altuve's problems also loomed large over Game 2, in which he bounced two throws to first from shallow right field while playing in a defensive shift. After the second error, Correa took Altuve's normal spot in the Astros' shift, and he retained the spot in Game 3.

Altuve also made a throwing error in Game 2 of the first-round series against Minnesota. He committed only four errors during the regular season for Houston, which led the majors with a .991 fielding percentage.

When asked if Altuve has the yips, Baker hesitated before saying, "I really don't know."

"It's tough to see this happen to such a great player and such a great guy," Baker added. "I don't know what it's called. You can go in a defensive slump same as you go in an offensive slump, and then physical turns mental. We've certainly got to get past this."

Altuve committed just two errors in his first 47 career postseason games before this year. The 5-foot-6 Venezuelan dynamo is generally considered a solid fielder at second, winning a Gold Glove in 2015.

Altuve won the AL batting title in 2017 when Houston beat the Los Angeles Dodgers in the World Series for its first championship. Last offseason, an investigation by Major League Baseball determined the Astros stole signs illegally in 2017 and 2018 using a camera in center field.

Altuve is still contributing at the plate for Houston despite his fielding woes. His first-inning solo homer off Ryan Yarbrough was his fourth of this postseason and the 17th of his playoff career, and his six career homers in the ALCS are the most in major league history.

Altuve also singled in the eighth and reached third with the bases loaded and one out, but Kyle Tucker and Yuli Gurriel couldn't drive him home.

Altuve came up again with two runners on and one out against Diego Castillo in the ninth, only to strike out on a close checked swing called by plate umpire Jeff Nelson.

Baker said he was "very disappointed" that Nelson didn't ask for help before making the call to strike out Altuve, who went 2 for 4 with a walk in Game 3.

The yips - an inexplicable, creeping loss of the ability to throw a baseball to its desired destination - have afflicted many talented major leaguers over the years.

Yankees second baseman Chuck Knoblauch infamously lost the ability to throw to first consistently in the late 1990s, eventually resulting in his move to left field and his departure from New York. Steve Sax, another strong defensive second baseman, caught the yips in 1983 and made 30 errors for the Dodgers, although he eventually overcame it.