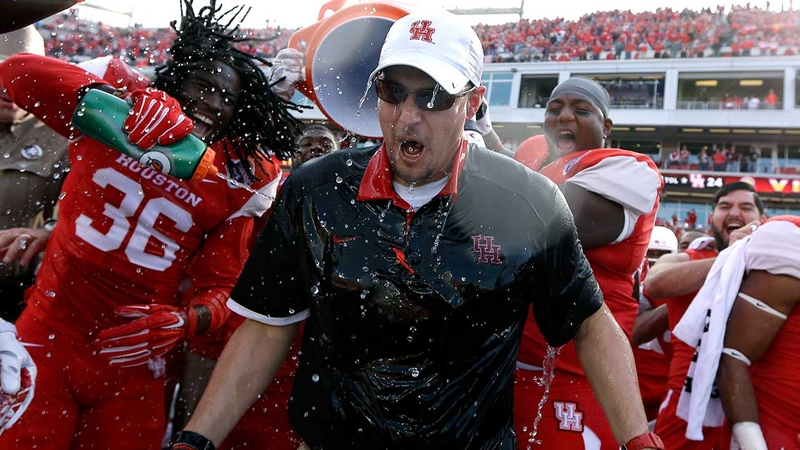 Tom Herman on the win

HOUSTON -- Greg Ward, Jr. ran for 148 yards and two touchdowns and No. 17 Houston came through with a 24-13 win over 20th-ranked Temple in the inaugural American Athletic Conference Championship game on Saturday.

The victory makes Houston the Group of Five representative, earning the Cougars a trip to either the Peach Bowl or Fiesta Bowl.

Temple (10-3) had a chance to get within a touchdown early in the fourth quarter, but Jeremy Winchester knocked down a pass in the end zone and the Owls settled for a field goal that made it 24-13.

They had two more chances to cut the deficit after that, but were stopped on fourth down both times.

P.J. Walker threw for 287 yards with a touchdown and interception and Robby Anderson had a season-high 150 yards receiving for the Owls, who are heading to a bowl for the first time since 2011.

Fans rushed the field after the game, making a sea of red surrounding the stage they brought out onto the field to present the championship trophy.

Video showed fans being tackled while rushing the field Saturday.

First-year coach Tom Herman helped the Cougars to their second 12-win season and first since they went 13-1 in 2011 under coach Kevin Sumlin and quarterback Case Keenum.

Herman recently was given a raise to $2.8 million a year and contract extension through 2020.

Ward's day gave him 1,041 yards rushing this season, making him the first quarterback in school history to rush for 1,000 yards. It was his fourth 100-yard rushing game and the sixth time he's run for two scores.

Houston cornerback William Jackson set a school-record by breaking up seven passes. That gives him 20 this season, which is also a record for the Cougars.

Ward's second touchdown came on a 10-yard run that made it 24-3 with less than seven minutes left in the third quarter. He was shaken up on the play after being drilled to the turf as he scored. Ward walked off after a couple of minutes and was attended to by medical staff on the sideline, but didn't miss a play.

That score was set up by another run by Ward when he burst up the middle on a 25-yard scramble and was stopped by a shoestring tackle by Delvon Randall three plays earlier.

Walker connected with Anderson on a 13-yard touchdown pass that got Temple within 24-10 late in the third quarter.

Ward evaded several defenders at the line and darted to the outside before dashing 47 yards for a touchdown that made it 17-0 with about 5 1/2 minutes left in the first half. The scramble was Houston's longest rushing touchdown of the season.

The Owls cut the lead to 17-3 with a 40-yard field goal by Austin Jones about two minutes before halftime.

Tyus Bowser intercepted Walker on Temple's first possession when he launched the ball under heavy pressure from Elandon Roberts.

Anderson grabbed a 14-yard reception on Temple's next drive, but Elandon Roberts forced a fumble and it was recovered by Trevon Stewart at the Houston 9. It was the ninth fumble recovery of his career which set a school record.

Anderson's fumble ruined a great drive by the Owls, which was powered by two nifty catches by Anderson. The first one came when he grabbed an 11-yard reception with one hand and the second one was a 14-yard gain that came after the ball was deflected by a Houston defender.

The Cougars pushed their lead to 10-0 with a 24-yard field goal early in the second quarter.