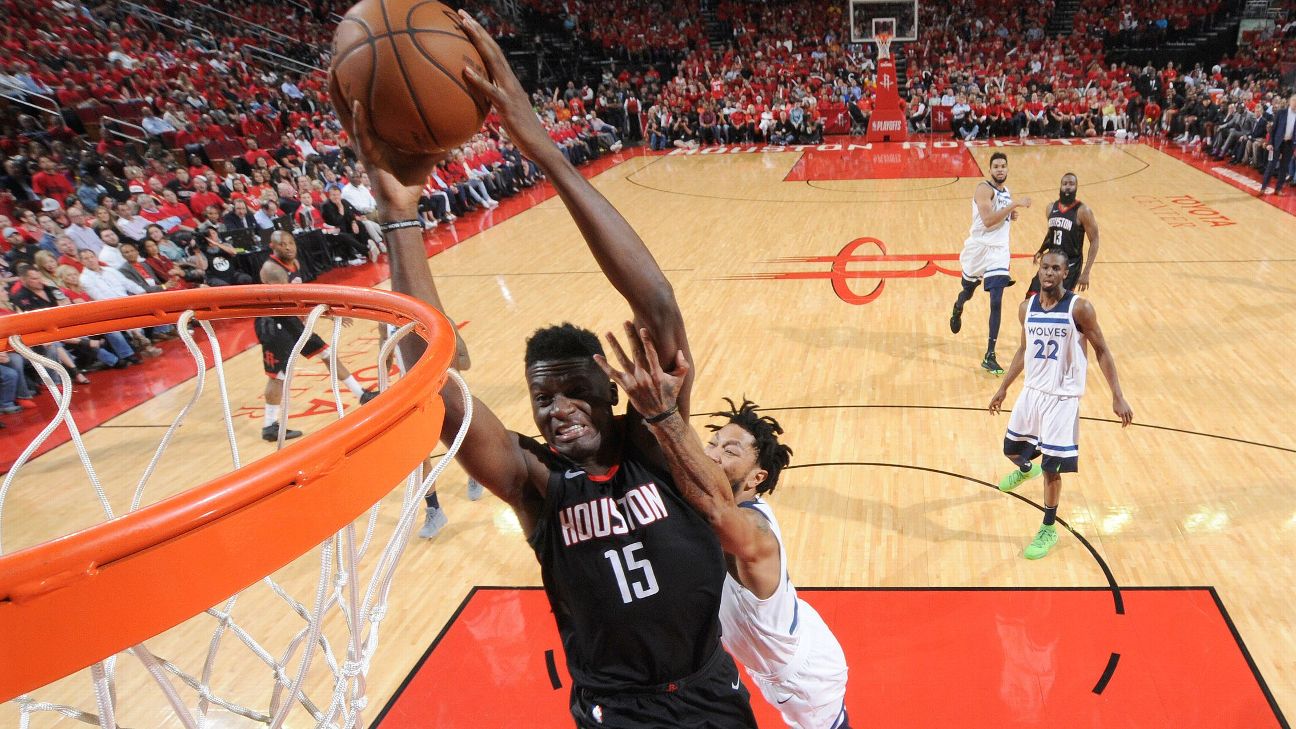 HOUSTON -- As Karl-Anthony Towns complained to the referee, asking for a goaltending call after his layup was swatted off the glass, Clint Capela broke into a sprint. Five seconds after blocking his All-Star counterpart's shot, Capela laid the ball in the basket on the other end, having outrun every player on the court.

That sequence early in Game 5 pretty much summed up the series for two of the NBA's most promising young centers.

Towns, 22, the No. 1 overall pick who has blossomed into an All-Star, underwhelmed during his first taste of the playoffs. Capela, 23, a little-known late first-round pick who has improved dramatically each season, frequently was a dominant force despite playing a complementary role.

The raw numbers for the centers in the series were pretty similar. Towns averaged 15.2 points and 13.4 rebounds, compared to 15.8 points and 14.2 rebounds for Capela. But their impact wasn't comparable, as Capela's relentless energy played a key role in the Houston Rockets finishing off the Timberwolves in five games, a stark contrast to Towns' often passive play.

"He just continues to get better, continues to listen and works his butt off," Rockets star James Harden said of Capela after top-seeded Houston's 122-104 win Wednesday eliminated Minnesota. "This series, it showed. Playing against guys we call All-Stars or whatever you want them, he doesn't really care about the name. He just goes out there and does his job every single night. That's why we're in the position that we are."

Capela can't do what Towns does. He will never have as versatile an offensive arsenal. He's not a new-age big man with the ability to score all over the floor. The Rockets aren't asking him to become that kind of player.

The Rockets love Capela just as he is. He's a perfect fit to play with a pair of future Hall of Fame playmakers in Harden and Chris Paul, more than happy to focus on running the floor, screening, rolling, finishing, rebounding and protecting the rim.

When Capela declared in midseason that the Rockets were better than the Golden State Warriors, Kevin Durant dismissed his right to be so bold, saying his job was too easy. But Capela certainly has earned the respect of coaches around the league, who recognize how important he is to the Rockets' realistic title hopes.

"He stars in his role," Timberwolves coach Tom Thibodeau said.

Thibodeau spent much of the early part of the series publicly prodding Towns to play with more energy. He specifically mentioned the importance of running the floor on multiple occasions after Houston held Towns, who was often double-teamed in the post, to single-digit scoring totals in the first two games.

But it's a lot easier said than done to outrun Capela, a gazelle in Nikes who doesn't have to be reminded that he can impact the game simply by sprinting.

"I try to always have that pace," said Capela, who has worked to build his endurance so he can play at maximum effort for 33 minutes, as he did during Game 5. "I feel like I have an impact on the offense whenever I sprint, whenever I put pace on our offense. By doing that, I feel like I really help my team. I really try to stay focused on that and keep that energy up."

Rockets coach Mike D'Antoni calls Capela "undervalued," half-kidding that the label will no longer apply once the big man's agent negotiates with Houston general manager Daryl Morey as a restricted free agent this summer. There is no question that Capela's work, often overshadowed by the flashy brilliance of Houston's famous headliners, is greatly appreciated throughout the Rockets' organization.

There are times when Capela's grunt work can go under the radar. Setting solid screens doesn't make SportsCenter. Neither does playing good defense after switching onto guards. And fans don't celebrate the guy who sucked in the help defense by rolling hard to the rim to help create an open 3 for a teammate. But those are all critical elements of the Rockets' success that Capela provides consistently.

"We just expect it from him," Paul said. "He runs the court, he plays hard, he sets hard screens. A lot of times people talk about the shots and passes and stuff we make, but he opens up everything for us because he's a threat when he rolls to the rim."

Then there are occasions like his bookend performances in this first-round series when you can't help but notice Capela. He opened the playoffs with a 24-point, 12-rebound, 3-block masterpiece. He closed out the Timberwolves by recording game highs with 26 points and 15 rebounds, going 12-of-14 from the field, most of his buckets rocking the rim.

"You don't get much better than that," D'Antoni said. "In that role that he has, there's nobody better in the league."

Rockets close out Timberwolves
James Harden and Clint Capela each post a double-double as the Rockets defeat the Timberwolves 122-104 to advance to the second round.

Harden on win: 'We wanted to grind every possession'
James Harden breaks down how the Rockets picked up their intensity throughout the game to secure a series win and is ready for whichever team they play in the second round.
Report a correction or typo
Related topics:
sportsespnminnesota timberwolveshoustonhouston rocketsrocketsnbaclint capelaplayoffswestern conference
Copyright © 2020 ESPN Internet Ventures. All rights reserved.
More Videos
From CNN Newsource affiliates
TOP STORIES