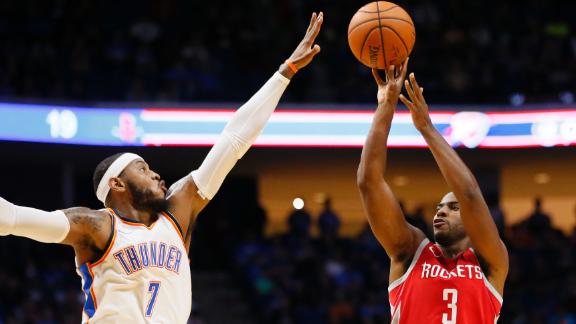 TULSA, Okla. -- A fresh era officially started for three of the NBA's stars on Tuesday night at Tulsa's BOK Center, as Carmelo Anthony, Paul George and Chris Paul made their preseason debuts for their new teams following offseason trades.

Those three were the headliners in the Houston Rockets' 104-97 victory over the Oklahoma City Thunder.

Paul had an 11-point, seven-assist, no-turnover performance in his first NBA game action with co-star James Harden. Anthony (19 points) and George (15 points) will have to wait to play with reigning league MVP Russell Westbrook, who sat out as he recovers from a platelet-rich plasma injection in his left knee.

The Rockets, who played their regular rotation -- save for resting reserve centerNene Hilario-- through the third quarter, scored 90 points in the first 36 minutes. It was an encouraging, explosive start to the co-point guard pairing of Paul and Harden, despite neither superstar shooting the ball particularly well. The duo dished out 17 assists, while the Rockets' regulars made 20 of 42 3-point attempts.

Paul considered the preseason opener a continuation of his summer work with Harden, which included a Drew League game and pickup ball in Las Vegas, Los Angeles, New York and Houston, as well as a player-organized voluntary minicamp in the Bahamas.

"It felt natural," said Paul, who had a steal and a fast-break assist to Harden for a trailing 3 in the opening seconds of the game. "We played a lot this summer, and I think that helped, spending that time talking about communicating and stuff like that. But we can always get better."

Houston coach Mike D'Antoni's plan is to stagger his stars' minutes, playing Harden and Paul as the lone point guard for about 14 minutes per game each, while the other rests -- although D'Antoni laughingly acknowledged that Harden's "death stares" from the bench could cause adjustments to that strategy.

However, Harden thoroughly enjoyed watching Paul perform Tuesday night, including during a four-minute, 10-second stretch in the first half, when Paul had five assists on 3-pointers, highlighted by a between-the-legs dish to Eric Gordon.

"We've all watched him for the last 12, 13 years," Harden said of Paul. "Now he has probably more space than he's ever had. With the pick-and-roll, and you have three, four shooters around you, it's going to make his game a lot easier."

"It's too much fun, man," Paul said. "One thing I've always said is, I can get somebody an open shot."

Paul, a nine-time All-Star who pushed for an offseason trade from the LA Clippers, is just as excited to prove that he can play off the ball, an opportunity he has never had during his career. He considers it a luxury to be able to spot up in the corner on possessions when Harden initiates the offense, which will lead to Paul getting open spot-up shots and attacking closeouts.

"It's cool. It's good. It's great," Paul said. "You do what you have to do on the teams that you're on. That's the way the game is worked. I'm enjoying this, you know what I mean? It's nice not to have to be in a ball screen every single time."

Meanwhile, Anthony scored the Thunder's first 10 points of the game, finishing with 19 points in 20 minutes on 7-of-13 shooting. George scored his first basket with the Thunder on a driving layup in transition and finished with 15 points on 6-of-13 shooting in 26 minutes.

Anthony sat the second half, with George playing the opening five minutes of the third, scoring eight of his 15 in a quick burst. George hit a transition 3 and a smooth pull-up jumper and finished a hard drive to the bucket before taking a seat with 6:55 left in the third.

With Westbrook sitting, Anthony and George had their moments, but they also had some awkward exchanges. Late in the first half, Anthony, who had taken the bulk of the Thunder's shots until that point, had a clear lane to the basket but elected to kick the ball to a covered George in the corner, where George fired up a contested 3. Anthony patted his chest and told George after the play, "My bad."

"I think sometimes we were overthinking it a little bit, trying to be too unselfish," Anthony said. "I know one time I had it on the wing and think I had a wide-open shot, and I gave it to Paul, and he shot it with like three seconds to go. And I know how that feels, so I felt bad about that. But those are the things that we'll get better at and knowing each other's game and knowing where guys are on the court and getting more comfortable."

Along with Westbrook, Patrick Patterson (knee) and Alex Abrines (knee) also sat out against Houston.

Steven Adams exited early in the third quarter and did not return after Harden pulled Adams down by the shoulder following a pump fake. Adams walked slowly off the floor holding his lower back, but he said he felt fine, saying the pain was more in his "glute-ish" area. Harden was assessed a flagrant foul 1 on the play.