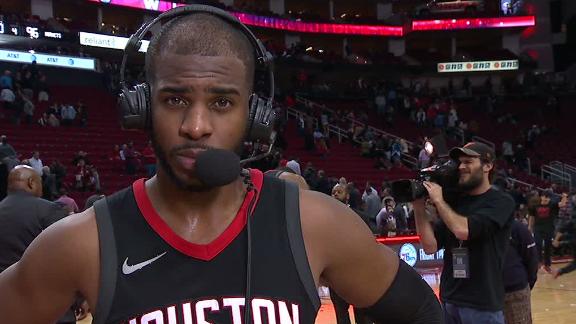 The Rockets extended their winning streak to 11 games -- a roll that started when Paul returned from a monthlong absence due to a knee injury -- with a 108-96 victory Wednesday night over the Charlotte Hornets.

Houston is 12-0 in games played by Paul, who missed nearly a month this season with a bruised left knee. According to the Elias Sports Bureau, that's the most consecutive wins for a starter with a new team since the 1995-96 Chicago Bulls won their first 13 games with Dennis Rodman.

Paul starred in Wednesday's win, scoring a season-high 31 points, grabbing seven rebounds and dishing out 11 assists. He accounted for 21 points during the Rockets' 25-0 run that broke the game open in the first half, scoring 13 points and getting three assists during the spurt.

Harden, the NBA's scoring leader, rested during the entire run, which occurred over 4 minutes, 25 seconds. Paul made 3 of 4 3-point attempts during that span, including one that beat the buzzer at the end of the first quarter, prompting Harden to hop off the bench and celebrate with a leaping high kick.

"Just to see him have that confidence and shoot that and be aggressive and get in his bag, as we call it, it's a great sight," said Harden, who had 21 points and eight assists in what qualifies as an off night for him. "Not only to fans and teammates, but everybody around the world loves to see Chris Paul do that. Hopefully he can continue that and continue to get that confidence to where if he wants to shoot the ball three, four, five, six times in a row, he can do it."

Paul is averaging 17.2 points and 9.5 assists during the winning streak and has ramped up his scoring recently with four 20-plus-point performances in the past five games. He has been especially dominant while Harden rests. According to ESPN Stats & Information, the Rockets have a plus-37.7 net rating (points per 100 possessions) with Paul on the floor without his All-Star backcourt partner during the winning streak, minutes that typically come against the opponent's second unit.

"With that unit that we have in, we play fast," Paul said of a group that usually also features defensive stopperPJ Tucker, high-scoring sixth man Eric Gordon and veteran reserve center Nene. "We push the tempo. If we're getting stops, it's going to be tough to stop us."

The Rockets, who have the NBA's best record at 22-4, have won by double digits in nine of the 11 games since Paul's return. Houston is beating teams by an average margin of 17.0 points during the winning streak.

"I don't never go into a game expecting to lose," Paul said. "I think we're just playing with the right pace, the right tempo, the right energy. It's fun."

CP3 says it's fun to play with Rockets
Chris Paul expresses how he feels about the success the Rockets have when he is on the court and how exciting this season can be for Houston.

Rockets on pace to compete with Warriors
Scottie Pippen explains the success the Rockets are having so far this season and if they are closing the gap between them and the Warriors.
Report a correction or typo
Related topics:
sportsespnjames hardenundefeatedcp3unbeatenhouston rocketsstreaknbachris paul
Copyright © 2021 ESPN Internet Ventures. All rights reserved.
TOP STORIES
Money in Lakewood Church wall may be tied to 2014 theft, HPD says
Fugitive task force searches for parents charged in MI school shooting
Fatal West Loop crash prompts traffic backup at 18th Street exit
Pasadena PD searching for suspect who stole Boy Scout trailer
Family of Navy vet shot to death on N. Fwy searching for answers
Watch 'ShopLocalish: Holiday Deals and Steals' with Tory Johnson
First, it was catalytic converters, but thieves moving to this part
Show More
Record highs possible Saturday, and Sunday will be steamy too
UH could turn national title picture upside-down if it beats Cincy
Mark Cuban buys entire Texas town, but what will he do with it?
How new TX law could impact topics educators can discuss in classroom
Omicron variant discovered in at least 7 US states
More TOP STORIES News