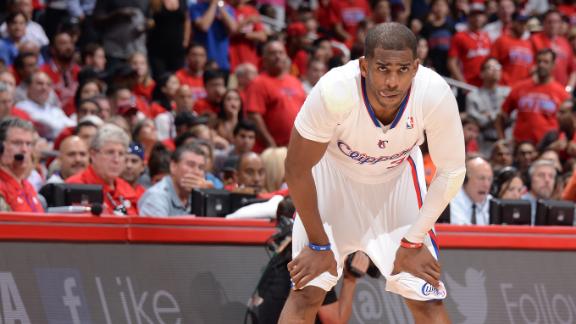 LAS VEGAS -- Los Angeles Clippers point guard Chris Paul told ESPN.com that it's "unacceptable" if Donald Sterling is still the owner of the team when the season begins.

Sterling has been banned for life by the NBA in response to racist comments he made in a recorded conversation released in April.

Paul also said he has spoken to Clippers coach Doc Rivers about the possibility of sitting out if Sterling remains in control when the seasons starts in a little more than two months.

"That's something me and Doc are both talking about," Paul said Thursday after coaching his AAU program, CP3. "Something has to happen, and something needs to happen soon -- sooner rather than later."

Interim Clippers CEO Dick Parsons testified earlier in the week in state court that Rivers told him on multiple occasions that he doesn't think he wants to continue coaching the team if Sterling remains in control of the franchise.

The issue remains whether Sterling's wife, Shelly, acted properly in selling the franchise without his consent. She agreed to a deal with ex-Microsoft CEO Steve Ballmer for a record $2 billion.

Closing arguments in the probate court case are set for Monday, at which point the judge will determine whether to authorize the sale or throw the situation into further confusion. Donald Sterling has vowed to fight "as long as he lives."

The original purchase agreement called for the sale to close by July 15 -- with an extension until Aug. 15. The NBA has said it will resume termination proceedings of the sale if it's not closed by Sept. 15.

Training camp is set to open in early October.

Information from ESPN.com senior writer Ramona Shelburne was used in this report.