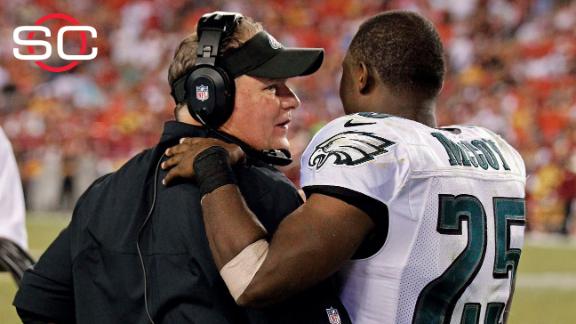 "I've got great respect for LeSean," Kelly said Thursday in his first public reaction to McCoy's comments. "However, in that situation, I think he's wrong. We put a lot of time looking into character and factors that go into selection and retention of players. Color's never been one of them."

Kelly said he reached out to McCoy and his agent, Drew Rosenhaus, to try to clear the air, but that he hasn't spoken to McCoy since trading him to Buffalo in March. Kelly said he wasn't affected by McCoy's comments.

"It doesn't hurt me," Kelly said. "I'm not governed by the fear of what other people say. Events don't elicit feelings. Beliefs elicit feeling. I understand what my beliefs are and I know how I am."

Until Thursday, Kelly had not been available to the media since the NFL draft. That was before running back McCoy told ESPN The Magazine that Kelly "got rid of all the black players."

Kelly has been the Eagles' head coach for two full seasons, but he gained full control of player personnel decisions after the 2014 season ended. Given that power, Kelly engineered a makeover of the Eagles' roster. McCoy, quarterback Nick Foles, linebacker Trent Cole, cornerbacks Cary Williams and Bradley Fletcherand guard Todd Herremans were traded or released.

McCoy, the Eagles' all-time leading rusher, was traded to Buffalo for Alonso in March.

While Kelly's contention that race played no role in his personnel decisions is supported by the diversity of his acquisitions, there would seem to be a risk of players believing McCoy. But Kelly said he didn't believe he had a perception problem.

"I don't see that here," Kelly said. He added that he has not addressed the matter with his team.

"You start chasing perception, you've got a long life ahead of you," Kelly said. "If you're worried about someone's perception of what's going on with you -- you can control one thing. You can control yourself. I know how we run this organization, and it's not run that way."